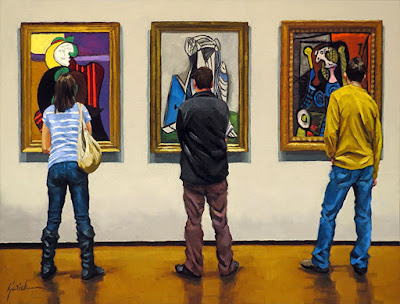 My homage to one of my all-time favorite movies Ferris Bueller's Day Off, on its 30th anniversary.  At the time it came out in 1986,  I was still missing my life in Chicago as a teenager just a few years back.  There's a scene in the movie when Ferris, his girlfriend Sloane and his best friend Cameron go through the Art Institute of Chicago - something I'd done dozens of times and even cut school to do so.  The three friends stop and stand in front of the three Picassos - here's a snapshot from the movie.... 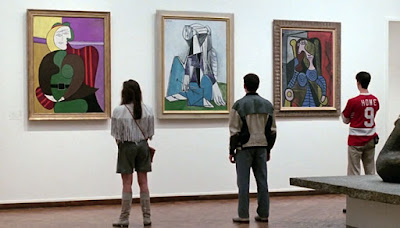 Well since then, many people have mimicked the pose - it became a tradition.  And their visit to an art museum proved to be an inspiration for young people to do the same.  That's a good thing.

I read a good article this week How Ferris Bueller's Day Off Perfectly Illustrates the Power of Art Museums - and a portion of the article, referring to Cameron's fixation on Seurat's A Sunday on La Grande Jatte,  I really like this quote from the curator at the Smithsonian American Art Museum - "I think that absorption of diving into a picture is as though you have seen yourself looking back at you and you have dived in so deeply you cease to exist," she says about life changing art. "What I tell people when they go through art museums is there will be a moment where you are dumbstruck in front of something and it changes your life forever."

About the Picassos - from left to right is The Red Armchair, Portrait of Sylvette David and Femme Assise, 1949, which was sold on auction.