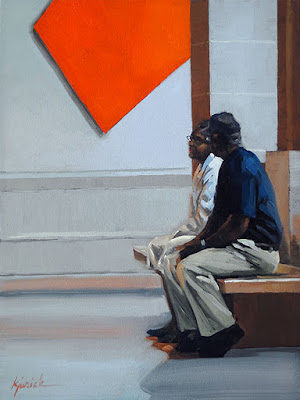 One of America's great abstract artists, Ellsworth Kelly, died last weekend at the age of 92.  In 2013, President Obama presented Mr. Kelly with the National Medal of Arts, the highest honor for artistic excellence.  This man was important.

I've roamed thru the Art Institute of Chicago a dozen times, barely noticing those six, large, colorful, geometric panels hanging high on the top floor of the American Art gallery.  They're titled 'The Chicago Panels' by Ellsworth Kelly.  To be honest, modern art doesn't grab me like realism does - only because, often, I don't understand it. And being an artist myself, that's a pretty shallow comment.

There's many important 20th century artists I've never heard of or paid little attention to until I read their obituary. After I read several moving obits about Ellsworth Kelly this week, so much made sense.  This man saw patterns in shadows, shapes and colors in nature and in life which he transformed into sculptures and paintings like no other.

Take the example of 'White Curve', which hangs on an exterior wall in the Pritzker Garden at the Art Institute. 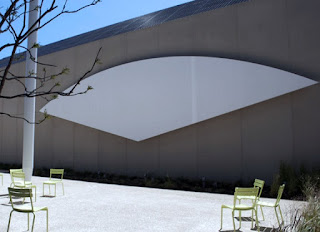 Now look at one of Kelly's own photographs taken in the countryside in New York. 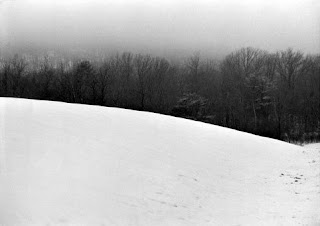 Now I get it.  Now I see it.  The red panel in my painting above, one of the six panels I mentioned, was inspired by the rich, reds of a cardinal he photographed while bird watching.  Now I get it.

By most accounts, Mr. Kelly was a delightful, warm, friendly, humorous, creative man who lived in the moment.  That should always be one's New Year's resolution - every day, every year - to live in the moment and  appreciate the beauty around us.  And never judge or dismiss what we don't understand.  We'd all be better for it.

Speaking for myself, I find it hard to appreciate vegetables and Indian food, hot summers, crowds, crowds who sing, performance art and Donald Trump to name a few - but life is long and I'm willing to learn, except for the Trump thing.

Wishing you a Happy and Healthy and Creative New Year ~ 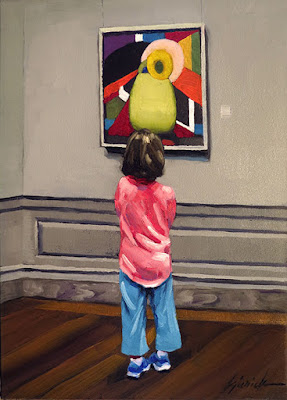 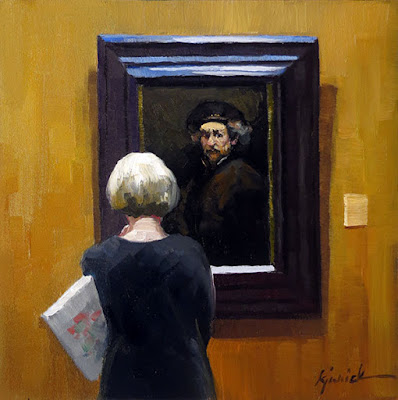 I spent 6 long days on a larger painting and gladly moved on to baking cookies and enjoying the feasts of Christmas.  Hope you had a nice holiday too.

Painting larger throws me off.  It kinda burns me out.  I love painting small.

From the National Gallery of Art in Washington DC - a woman gets a good look at Rembrandt's 'Self Portrait'. 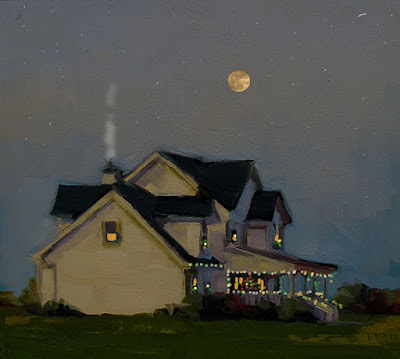 Wishing you a peaceful, happy holiday. 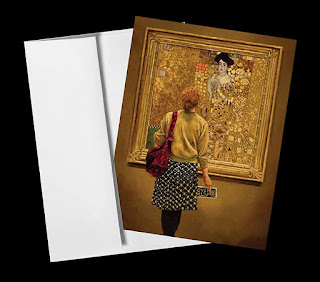 I created this note card for myself and it's so cool,  I ordered more in the event you're interested.  The front of the card features my painting 'Women In Gold' and it is blank inside.  The card measures 4-/14" x 5-1/2", printed on a glossy finish - sold as a set of 10 note cards with 10 white envelopes.

on that note.... I'm so pleased with the quality and the response, thank you all.  I'll be doing more in the future.

This new painting depicting a woman viewing Gustav Klimt's stunning portrait of 'Emilie Floge' - will be included in a group show titled 'Silver vs Gold', represented by Robert Lange Studios and showing at The Vendue in Charleston SC.

You may have read in my previous post about my painting 'Women In Gold' that I painted the surface of the hardbord a metallic gold ground.  With this piece, I painted the surface a acrylic, metallic silver mixed with a little blue - with worked very well with the various blues and greys in the painting.  The result is a subtle reveal of the silver peeking out throughout the entire painting - very cool.

This painting will join the exhibition in early January and it can be purchased thru Robert Lange Studios.

I just received my proof copy and my new book ArtistZ is so cool. 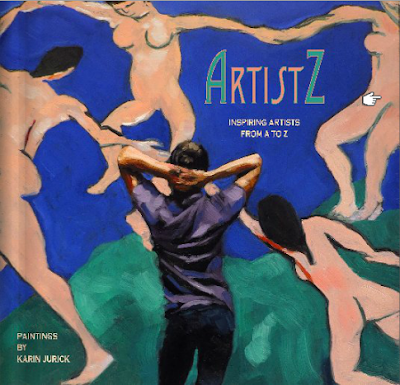 The book includes 26 color reproductions of my paintings in a recent series ArtistZ - for each painting, I included the birth and death year of each artist, a self-portrait or photo of each artist and a selected quote from the artist.  Here's an example.... 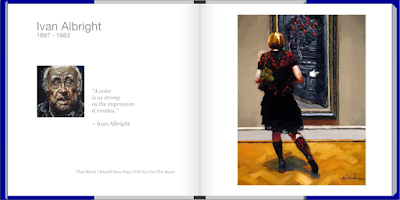 You can preview a portion of the book here.

And you can purchase your book here.

My new 2016 wall calendars Inspiring Artists are SOLD OUT. 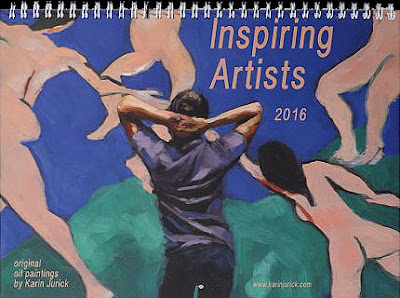 Labels: a painting a day, artists, calendar, Karin Jurick
Newer Posts Older Posts Home
Subscribe to: Posts (Atom)
“It seems to me very important to the idea of true democracy - to my country - and to the world eventually - that all men and women stand equal under the sky...” - Georgia O’Keeffe