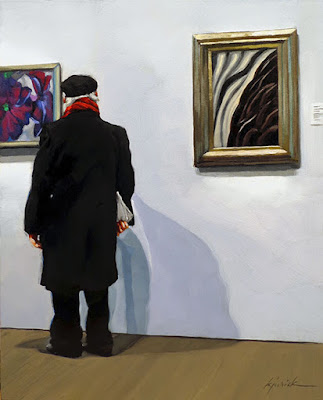 Today is Giving Tuesday and I am participating in my own way - donating 75% of the final sale of this painting to Our Lady of Perpetual Help Home here in Atlanta.  This hospice operates solely on private donations and cared for my dad. 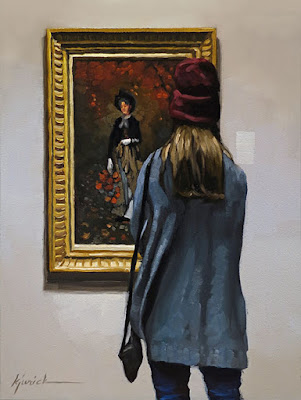 One of the many masterpieces in our National Gallery of Art in DC is Winslow Homer's Autumn.  It will take your breath away.  It's casual and approachable.  Homer's rich reds, bronzes, greys, greens and golds are as stunning as the fall leaves that surround us during these few weeks. Ode to autumn.

Winslow Homer is an American treasure, born 1836 in Boston - a printmaker, painter, illustrator.  A little-known fact - at the age of 25 he was sent to the front lines of the Civil War to sketch battle scenes, camp life, commanders - all of which were published in Harper's magazine. Those sketches were later formed into realized paintings when Homer returned home.

Homer then turned his attenton to more nostalgic scenes of childhood and family - then to postwar subjects of Reconstruction and depictions of African American life after emancipation.   The most familiar paintings of Winslow Homer are his landscapes and seascapes - done is his later years when he moved to Prouts Neck, Maine.  It has been said Homer led an isolated life as an old man but continued to paint vigorously, hinting a turn to more abstract and expressive art.  He died at the young age of 74.

I watched President Obama's ceremony today, awarding 21 Medal of Freedom recipients who all are truly outstanding humanitarians who've made positive, progressive, compassionate, brilliant contributions of our country.  I will miss President Obama for his grace and thoughtfulness and reminding me what's important and good about us.  Take some time and watch the ceremony in its full version here. 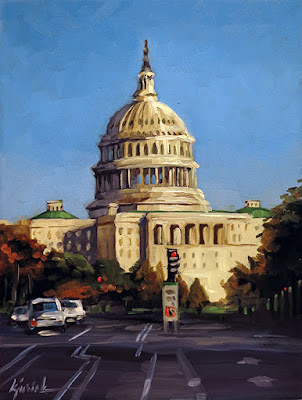 But this is my painting blog.

Art does soothe the soul when it's needed most.

I've just returned from a trip to visit family and spent an afternoon soothing my soul in the National Gallery of Art in Washington DC.  As I crossed Constitution Avenue on my walk back to the car from the museum, I stopped to admire our newly-renovated, unscaffolded Capitol Building.

"I See a Pattern Here" 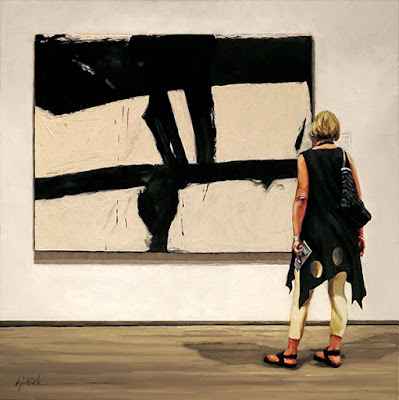 I usually don't talk to anyone in the museums but I told this woman I loved her shirt.  I said it was a work of art itself.  She seemed delighted to hear that.

I've also mentioned in prior posts that I'm not a great fan of abstract expressionism, a movement that came along in the 1940-1950's.  But there is something that stops me in my tracks when I see a Franz Kline or Robert Motherwell painting - I suppose it's the patterns.  Like this woman's shirt.

Franz Kline was born in 1910 in Wilkes-Barre, Pennsylvania - a town we hear a lot of during this Presidential campaign.  It was a small, coal-mining community, now the state's 13th largest city.  I've been there - as a little girl, my dad would take my family for a Saturday drive seeking out one of several authentic Italian delis for lunch in Wilkes-Barre.

Back to Kline ...  as a young man, he was sent to an academy in Philadelphia, studied at Boston University then a school of fine art in London, returned to the U.S. working as a designer in New York City.  It was there he developed as an artist, gaining recognition.

His style came about using simplified forms based on locomotives, landscapes, large mechanical shapes from his coal-mining hometown.  You can see that.  His friendships with like-minded artists such as Willem de Kooning and Jackson Pollock influenced his direction of abstract expressionism - direct and spontaneous brushstrokes which defined him as both an action painter and a minimalist.

Kline tended to avoid defining his art or offering explanations of what his 'message' was, which shows in his titles like his painting you see in my painting - Painting, 1952 which hangs in the Art Institute of Chicago. 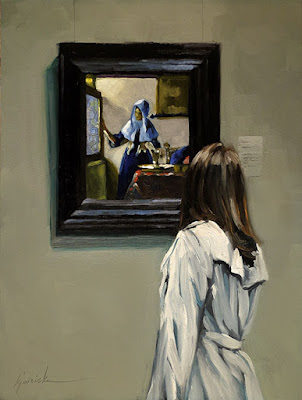 Labels: a painting a day, art museum, figurative, Jan Vermeer, Karin Jurick, Metropolitan Museum of Art, New York City, oil, women
Newer Posts Older Posts Home
Subscribe to: Posts (Atom)
“It seems to me very important to the idea of true democracy - to my country - and to the world eventually - that all men and women stand equal under the sky...” - Georgia O’Keeffe