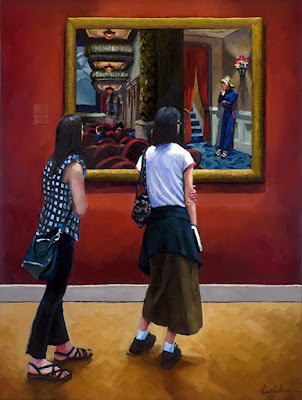 My new painting features Edward Hopper's New York Movie which I last saw at the Art Institute of Chicago, on loan from the Museum of Modern Art in an exhibition titled America after the Fall: Painting in the 1930's.  The exhibition included my very favorite painters - Hopper, O'Keeffe, Grant Wood to name a few - depicting scenes during the Great Depression.  It was unforgettable.

- Hopper painted the work in 1938 after a long dry spell of not painting anything.

- The location is the Palace Theater, now the Lunt-Fontanne Theatre, chosen after scouting out the Strand and others.

- The woman on the right was modeled after Hopper's wife, Jo.  He had her stand under a hallway light in his building for sketching and studies.

- The outfit Jo is wearing was based on the wide-legged jumpsuits actually worn by the Palace Theater's staff.

- The theme on the movie screen was thought to be from a 1937 movie Lost Horizon by Frank Capra.

- The poet Joseph Stanton wrote an ode to the painting. 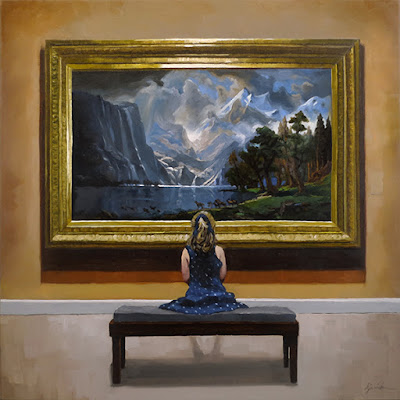