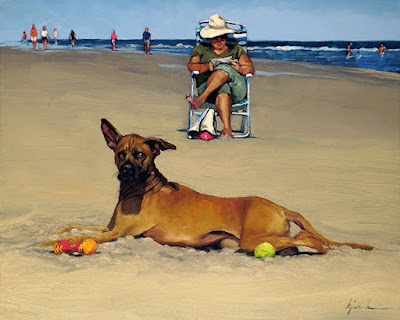 A happy dog with her toys on the beach of Hilton Head Island. 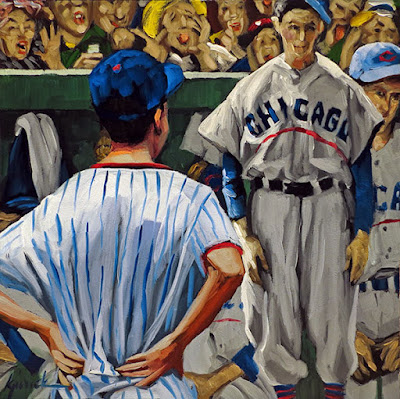 My homage to Rockwell and our World Series - a young Chicago Cubs fan viewing Norman Rockwell's The Dugout. 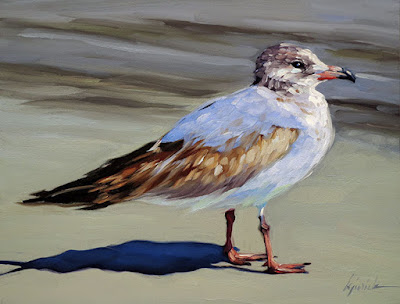 Speaking of the beach... 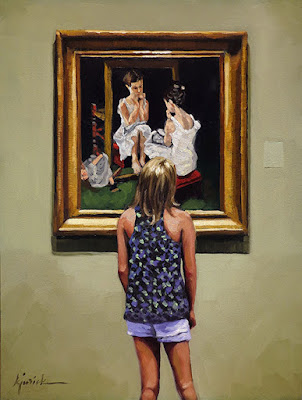 I started this new study yesterday morning.  The painting the young woman is looking up at is one of my favorites by Norman Rockwell titled Girl in a Mirror.

I was listening to Michelle Obama's inspirational speech as I was painting.  Here is a portion that stuck with me...

"What message are our little girls hearing about who they should look like, how they should act? What lessons are they learning about their value as professionals, as human beings, about their dreams and aspirations?"

You can read Michelle Obama's speech in full here. 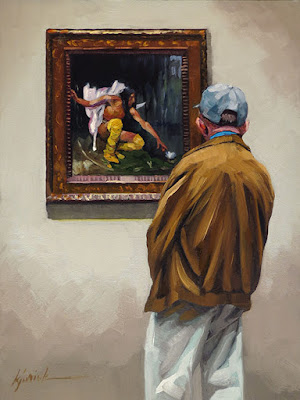 When I began listing works of art I'd like to feature portraying the American Spirit, I remembered this exquisite painting in Crystal Bridges titled The Indian and the Lily by George de Forest Brush, done in 1887.  It's one of the many pieces in the museum that knocked my socks off.  It is so intimate in size, so beautifully painted, so tender, a glimpse of a moment in the life of a Native American Indian.

A little bit about the artist, George de Forest Brush - born in Tennessee, raised in Brooklyn and Darien, Connecticut, he trained in New York then later in Paris under the brilliant artist Jean-Leon Gerome.  Gerome is one of my personal favorites and I can use the same descriptions of his work - intimate, exquisite, precise realism, glimpses into personal lives.  The influence of Gerome is so very evident in Brush's paintings.

After Brush returned to America and in 1882, he ventured west with his brother and found his subject, America's native people.  For more than a year he lived among the Arapahoe and Shoshone in Wyoming and the Crow in Montana - creating paintings and etchings of Indians 'far removed from the reality of contempory Indian life'.  Brush chose to depict the Indians in a 'timeless environment undisturbed by the advent of the modern'.  He resented the rapid industrial revolution and how it negatively affected the Native Americans, instead he desired to portray them in their way of life and their connection to the natural world.

An article I found tied Brush's painting to the story of Narcissus, the perils of seeking an unattainable perfection and the novel Imensee, a story of a man reaching out for a perfect water lily but nearly drowns when he falls into the pond, getting tangled in the roots of this perfect flower.  He climbs out of the water, looks back at the water lily floating calmly - a metaphor for the struggle of the Indian tribes maintaining their way of life in a complicated, progressing world.

You should take time to look at more of Brush's amazing paintings.  They offer peace and tenderness in these days of anxiety and unrest. 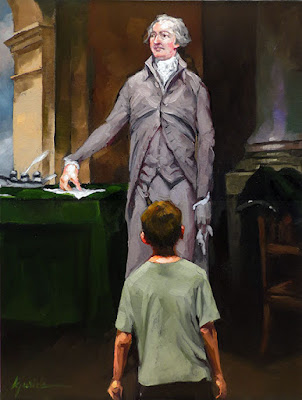 I'll tell you a couple of things you don't know about me.

I love major league baseball.  We watch nearly every Braves game and we're bummed the season is ending this weekend.  We often watch late night LA Dodgers games for the pleasure of listening to Vin Scully announce the play-by-plays.  And sadly, that simple pleasure is coming to an end.  So a salute to Vin Scully, who's retiring after 67 seasons as the Voice of the Dodgers.  You'll be so missed.  On a happy note, the Chicago Cubs may very well be in the World Series and I'm rooting for them to go all the way.  Truth is, no other sports do a thing for me.  Just baseball.

Another thing you don't know about me - I failed Art History in college.  Two different classes as a matter of fact.  So now, I'm not only atoning for that, I'm avid about it.  The older I get, the more I grasp history and how art connects to it, to us.  You're never too old to learn.

Which brings me to my new project.  I'm mapping out the work for an upcoming solo show in the spring.  My recent visit to Crystal Bridges Museum of American Art got me thinking about our American history - how art reflected the times, the movements, the struggles, the politics, everyday life.

That notion evolved along with the summer of this Presidential election.  What's happened to me is I'm feeling defensive more and more about what kind of country we want, what we aspire to.  Do we embrace the past lessons and have we learned from them?  Do we want to move forward, progress as people, as a nation?  Do we accept our differences and find a way to live in harmony?  Are we proud of how we got here, our ancestors who many were immigrants?  Don't we want to be proud of our melting pot?  Do we want to be respected and show respect to one another?

That has brought me to an idea, a theme - something in the vein of American Pride or Spirit.  When I think in those terms, the best artworks I know come to mind.  I have a true passion for American art - you may have picked up on that.  Hopper, Rockwell, Thomas H Benton, Wyeth to name a few - depictions of who we are as Americans.  What we've accomplished thru thick and thin.

So that's where I'm heading with my idea and I'd like you to be involved.  Be my focus group.  Offer ideas of iconic works of art that convey that American spirit.  I'll be working on small studies as I go - give me feedback.  Poopoo it if you want, give me a thumb's up if you want.  It all means something to me.

Now - a little bit about my new painting, which features Portrait of Alexander Hamilton by John Trumball, which hangs in Crystal Bridges Museum of American Art.  John Trumbull was an artist during the American Revolutionary War, famous for his historical paintings - his Declaration of Independence is on the back side of the 2-dollar bill.

Trumball painted Hamilton's portrait in 1792, one of many made of Hamilton and considered the 'greatest known portrait' of one of our Founding Fathers.


And a Happy October to you ~

Labels: a painting a day, Alexander Hamilton, American history, art museum, boy, Crystal Bridges Museum of American Art, figurative, Karin Jurick, man, oil, portrait
Newer Posts Older Posts Home
Subscribe to: Posts (Atom)
“It seems to me very important to the idea of true democracy - to my country - and to the world eventually - that all men and women stand equal under the sky...” - Georgia O’Keeffe