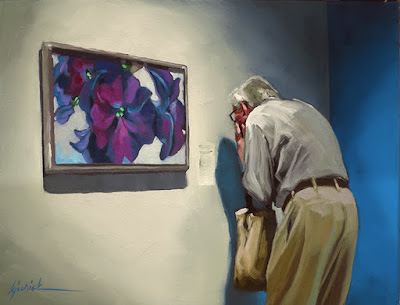 This was taken from my time at the Crystal Bridges Museum of American Art, during a special exhibition of Georgia O'Keeffe's works as well as others.  The show was so well thought out and presented for the visitors, paying close attention to what works married well with each other and the colors of the walls surrounding the pieces.  I relished that.

One of the paintings included was O'Keeffe's Petunias, done in 1925.  When you think of Georgia O'Keeffe, you equate her with Southwestern subject matters, some Manhattan scenes, and mostly close-ups of flowers.  She was widely known to have lived in New York City when her career was taking off and promoted by her husband Alfred Stieglitz - then later in New Mexico.  You might not know, during the early years, her and Steiglitz spent their summers at the resort of Lake George, about 35 miles from the Vermont border.

During those years, from 1918 to 1934, at Lake George, O'Keeffe painted over 225 pieces.  The time and surroundings at Lake George played a significant role in her development as an artist.  There she painted many of the flowers you may be familiar with - poppies, petunias and canna lilies - poplar and oak trees - the brilliant autumn colors of nature - all those she became so sensitive to from long walks through meadows and gardens.

Stieglitz and O'Keeffe owned 37 acres, lived in a hilltop farmhouse that included a 'shanty' as her studio and a darkroom where Steiglitz printed his photos.  In the late 50's a developer bought the property, has the structures burned in a practice fire drill and built a hodgepodge of ranch houses that remain to this day.

People still go on their pilgrimages to find where O'Keeffe lived, only to be disappointed to find a suburban subdivision. 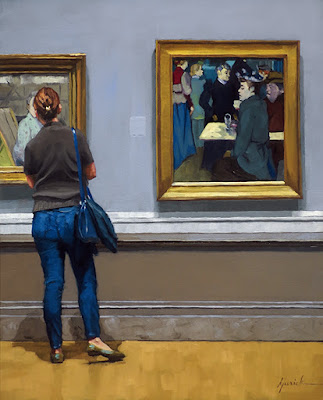 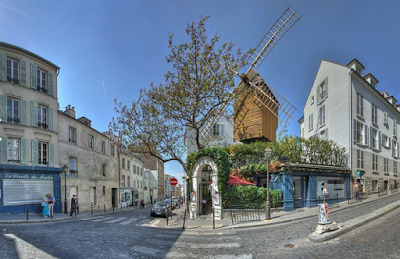 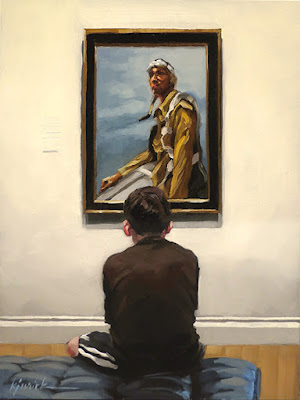 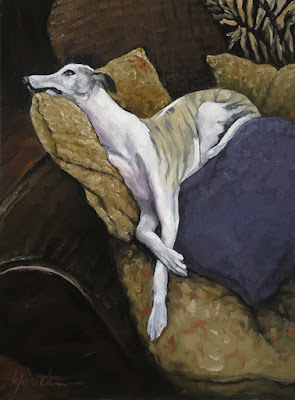 My painting of a dearly departed best friend of a friend. 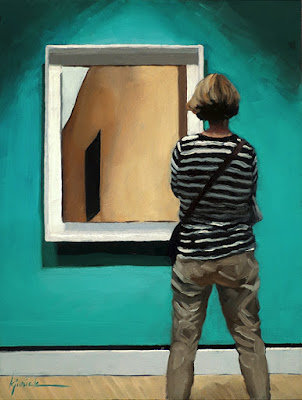 I just returned from my second visit to Crystal Bridges Museum of American Art.  I love the museum.  It's located in Bentonville, Arkansas - in the northwest corner of the state.  It's a small town, home of the Walton family who started Walmart years ago.  Alice Walton has been an art collector for decades and built this museum and is currently building a second one in town.  It's free admission and free parking.  It's so worth the trip.

I landed there on the final weekend of their exhibition The Beyond: O'Keeffe and Others.  Spectacular variety of many O'Keeffe's landscapes, flowers, etc mixed with other contemporary artists.  The painting above is one of my personal favorites - Black Patio Door.  It was hanging on this saturated turquoise wall that was so unexpected but so freakin' perfect.

O'Keeffe, in 1945, purchased and restored a 5,000 square foot ruined Spanish Colonial home in a small town, Abiquiu, New Mexico, which she owned until her death in 1986. She was in love with the simple beauty of the adobe house and its spaces and vistas inspired many paintings done through the years - especially the large enclosed patio.  She was quoted "When I first saw the Abiquiu house it was a ruin with an adobe wall around the garden broken in a couple of places by falling trees.  As I climbed and walked about the ruin I found a patio with a very pretty well house and bucket to draw up water. It was a good-sized patio with a long wall with a door on one side. The wall with a door in it was something I had to have."

Labels: a painting a day, art museum, Crystal Bridges Museum of American Art, figurative, Georgia O'Keeffe, Karin Jurick, oil, woman
Newer Posts Older Posts Home
Subscribe to: Posts (Atom)
“It seems to me very important to the idea of true democracy - to my country - and to the world eventually - that all men and women stand equal under the sky...” - Georgia O’Keeffe