I finished this new painting last night,  Memorial Day evening.  It features a sliver of Emanuel Leutze's depiction of Washington Crossing the Delaware - a massive painting nearly 22' x 13' not including the elaborate frame.

The story behind this famous oil - the event took place on Christmas night in 1776, Washington's aim was to attack Hessians, German auxiliaries fighting on behalf of the British, in Trenton, New Jersey during the American Revolution.  It of course depicts the future first President of America and also the future fifth President James Monroe who's holding the American flag.

The artist Emanuel Leutze was a German who grew up in America, born 40 years after the Battle of Trenton.  He returned to Germany as an adult, where he painted this moment in history, hoping to inspire and motivate the European liberal Revolutionaries.

A few things where the artist took poetic license - the flag didn't exist until a year after the battle, the boat was more of a raft and Washington was much younger than portrayed and knew enough not to stand up in a rowboat.  Historians don't believe Monroe crossed the Delaware, although he did fight in Trenton and got a bullet in his shoulder that remained for the rest of his life.  The other occupants in the boat were from different walks of life - fur trappers, an African, a Scot, farmers and one woman who represented women who fought and died for freedom.

The painting was damaged by a fire during the first year and Leutze successfully repaired it and completed it before a German art museum acquired it.  That painting was destroyed in 1942 during a WWII bombing by British forces.  Luckily, Leutze created a copy (can you believe it?) after he finished the first one that was shipped to New York City in 1851 where it was displayed in a gallery and at the U. S. Capitol in Washington, DC.  It is now on permanent display in the Metropolitan Museum of Art in New York City.


~ In the NYT obits today was the passing of John Driscoll who owned New York City's oldest art gallery, the Babcock Gallery. I was surprised to read this portion "In 2015, Dr. Driscoll arranged the purchase of one of two surviving versions of Emanuel Leutze’s “Washington Crossing the Delaware,” from 1851. A collector who had lent it to the White House for 35 years sold it to the founders of the Minnesota Marine Art Museum in Winona. It’s probably the most famous American painting west of the Hudson River,” Dr. Driscoll said when it was unveiled. “At auction, this picture would have pulled out not only art collectors but ultrapatriots who are very wealthy.”  Mr. Driscoll died of the COVID-19 virus. 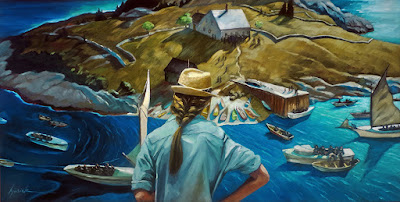 I was to have a solo show open on July 3rd at Robert Lange Studios and it very well may be a virtual show with other artists.  Who knows?  In any event, I've been working on pieces every day, with the newest painting to show you today.

The spectacular painting the woman is viewing is Island Funeral by the great N. C. Wyeth.  Many people who see originals by N. C. Wyeth for the first time are surprised by the size of the works - like Norman Rockwell, the majority were illustrations for books or magazines.  Island Funeral is jaw-dropping in person.  The deep, rich blues and greens were a result of Wyeth's collaboration with the DuPont Company, (based in Chadds Ford, Pennsylvania and home of the Wyeths.)  DuPont developed the vibrant blue and green dyes that have proven to last nearly 100 years.

There's an interesting story behind the painting.  In the fall of 1935, the Wyeth family watched from the porch of their summer home in Port Clyde, Maine, the flotilla of boats passing by on their way to Teel Island for the funeral of Rufus W. Teel.  Teel was a legendary lobsterman, born and lived his whole long life of 97 years on the island.

Wyeth organized his first solo gallery show around Island Funeral - hoping to dispel the notion he was just an illustrator.  His unique composition and perspective, hovering above the activity like a sea gull, and his colors demonstrated he was indeed an artist. 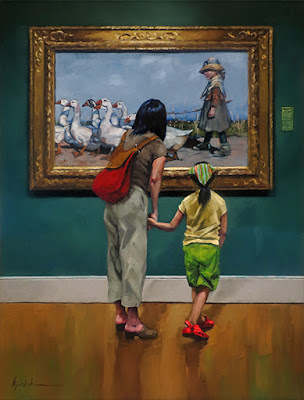 I spotted this painting on Instagram and recognized it as one of the popular prints I used to frame for customers back in the day.  People commonly referred to it as "the goose girl", its real title is To Pastures New by Sir James Guthrie.  The painting has traveled all over the globe but does reside at the Aberdeen Art Museum in the UK.

James Guthrie was a Scottish painter during the late 1800's - early 1900's, during the Victorian era and what is called the Gilded Age.  The wealthy commissioned portrait artists - think John Singer Sargent and others, including Guthrie, to paint large, elaborate portraits of their patriarchs, wives and children to adorn their mansion walls.  It was all the craze.

The young group of Scottish artists, the Glasgow Boys, who Guthrie was associated with, considered themselves rebellious, rejecting the older generation of artists and declared themselves to be anti-establishment.  Other groups, like the union of newspaper illustrators with members such as Winslow Homer, grew tired of the upper crust being depicted in popular art and felt the need to portray the working class and African-Americans who were experiencing prolonged lives of enslavement during Reconstruction.  They felt an obligation to show their dignity and contributions despite their suppression.

To Pastures New is a perfect example of Guthrie's commitment and sense of pride painting directly from nature and his surroundings in Scotland, portraying a young, hard-working peasant girl filling the canvas like a giant shepherding her animals through the field on a normal workday.

Labels: a painting a day, Aberdeen Art Museum, animals, art museum, figurative, girl, James Guthrie, Karin Jurick, landscape, oil, woman
Newer Posts Older Posts Home
Subscribe to: Posts (Atom)
“It seems to me very important to the idea of true democracy - to my country - and to the world eventually - that all men and women stand equal under the sky...” - Georgia O’Keeffe