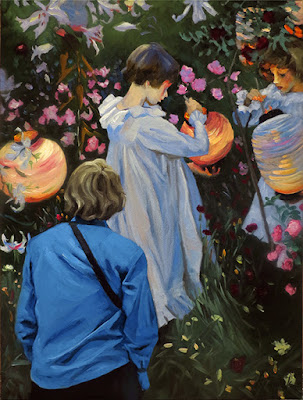 6 x 8"
oil on panel
sold
As I finished this new painting, I realized outside the cold wind was blowing and snow flurries were falling on Christmas Eve in Atlanta.  Truly unexpected. And pretty darn cozy.  John Singer Sargent's Carnation, Lily, Lily, Rose - a most perfect painting in my opinion, depicts a warm, summer night - completely opposite of the evening outside my window.
In 1884, Sargent had just experienced a scandal in Paris, resulting from the exhibition of his famous portrait Madame X.  It damaged his reputation all because the critics freaked out over the dress strap of Amelie Gautreau had fallen off her bare shoulder.  That was it. The prudes disapproved.
Seeking restoration, Sargent moved to England and spent summers in an artist's colony, where he completed Carnation, Lily, Lily, Rose.  He was staying at the home of his artist friend Francis Millet and the two girls he used as his models were the daughters of another artist Frederick Barnard.  His inspiration came from a boating trip where he saw Chinese lanterns hanging in the trees, combining that element with the girls.
The painting was a hit at an 1887, and Sargent was once again the talk of the art world with his reputation restored.  It belongs to the collection of the Tate Museum in London, England.
~ Wishing you and yours a peaceful and beautiful Christmas holiday. 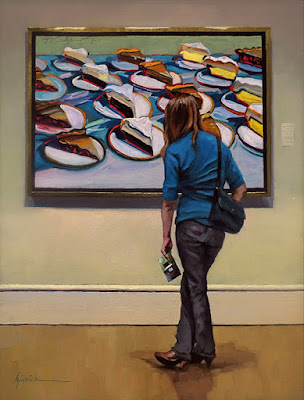 9 x 12"
oil on panel
sold
I've said it many times on this blog - Wayne Thiebaud is an artist who has and still does greatly inspire me as a painter.
Here are the reasons I continue to admire and love Thiebaud. His work ethic, still, at the age of 100, is admirable.  He's a humble man despite being considered one of America's greatest living artists.  He is best known for what critics describe as an artistic appreciation for everyday objects - although he's been known to dispute that, describing his "humble goals to try and paint at any time any subject matter in any medium under the general heading 'people, places and things.'"  I told you he was humble.
Featured in my painting is Wayne Thiebaud's Pie Rows.
Please click here for a larger view.

I'm clearing out 3 paintings that I've held on to - and I'd like to make a charity donation with a portion of the proceeds.  All 3 are framed and ready to hang.

Thank you for considering a purchase. 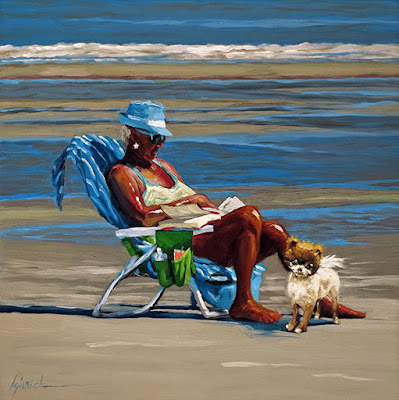 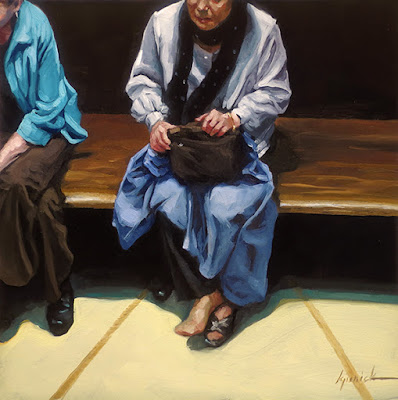 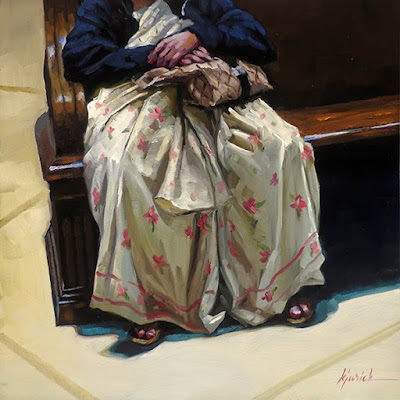 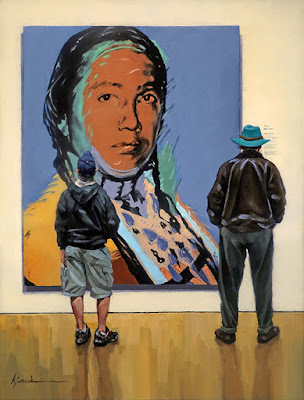 9 x 12"
oil on panel
sold
Our National Portrait Gallery in DC has a moving exhibition titled The Struggle For Justice, which is where I saw Andy Warhol's Portrait of Russell Means.  It blew me away.  Perhaps it's the largeness, or the bold colors.  I'm not a huge Warhol fan with an exception of his portraits.  I always question why he chose this person, like Mao Tse Tung for example.
This is what I've learned since - the clue is this powerful portrait is included in an exhibit showcasing the men and women in the 19th century to present who struggled to achieve civil rights for the disenfranchised and minority groups.  Russell Charles Means was an Oglala Lakota activist for the civil rights of Native Americans.  He was a libertarian activist, an actor and writer and a musician.  He joined the American Indian Movement in 1968, becoming their prominent leader.
And here's more.  Means participated in the occupation of Alcatraz in 1969. He protested in Boston, seizing the Mayflower II replica, bringing attention to the mistreatment of Native Americans by the Puritans and the United States.  In '71 he joined the protest at Mount Rushmore, which is within the Black Hills and sacred to the Lakota tribe. He took part in the occupations at Wounded Knee, the Bureau of Indian Affairs in DC.  In the 80's he resigned from the AIM and ran for the presidency of his native Oglala Sioux tribe and lost.
Means appeared in numerous films - The Last of the Mohicans being the most notable.  He actually made a guest appearance on Curb Your Enthusiasm, playing Wandering Bear, a skilled landscaper with a flair for herbal medicine.  He was married five times, had seven biological children and three adopted children and twenty-two grandchildren.  He died in 2012 from cancer.
Warhol did a Cowboys and Indians series in the time closest to his death in 1987.  He was fascinated with the movies and Westerns particularly.  The series included famed enemies and heroes of the genre - a commentary on the media pushing the iconography of what he considered exploitation, war, power and ownership - kinda thumbing his nose at what constitutes Western art.
I finished this painting yesterday and by this morning, it had sold.  But you can view a larger image here.