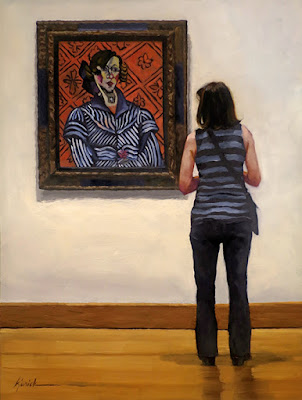 A woman viewing one of my personal-favorite paintings in the Art Institute of Chicago - Portrait of Juanita Obrador by Joan Miro. 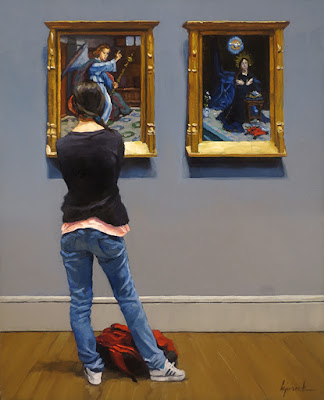 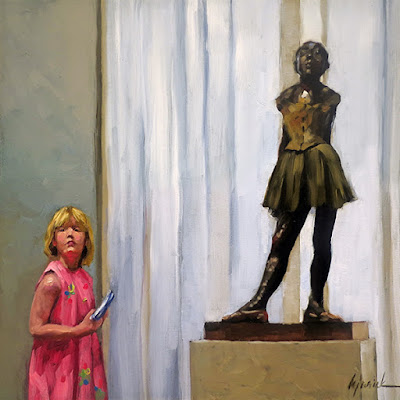 You might have run across Edgar Dega's sculpture of the young ballerina in several different art museums.  You're not crazy.  This Little Dancer, Aged Fourteen resides in the Philadelphia Museum of Art.  When I visited the museum, it was not encased in a glass box, which made a huge difference in appreciating this perfect figurative sculpture.  And I mean perfect.

Degas painted young ballet dancers numerous times.  At rehearsals, stretching exercises and lessons in ballet studios.  He drew them in pastels and charcoal, painted them in oils.  The model for Little Dancer was Marie van Goethem who posed for the only sculpture exhibited in Dega's lifetime in 1881.  Little Dancer was originally executed in wax and later cast in bronze around 1922, after Dega's death.  Which is why you maybe have seen one yourself. 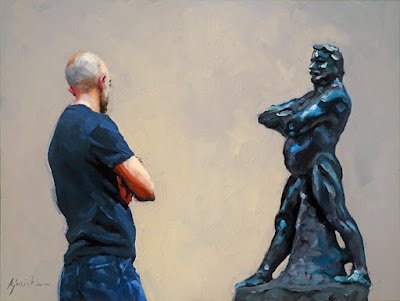 It's been my observation that men really like this Portrait of Balzac by Auguste Rodin.  The sculpture stands in the large French Impressionism gallery in the Art Institute of Chicago, strikingly bolder than the oil paintings by Renoirs and Degas, to name a few.

The Portrait of Balzac was one of several bronze sculptures commissioned by a literary society in the 1890's, in honor of the famous French novelist Honore de Balzac.  Rodin immersed himself in studying the writer - reading all his books, visiting his birthplace and studying all known existing portraits.  It took Rodin seven years before he created this particular one - intending to stress Balzac's 'vitality and candor' in a full nude portrait that was immediately rejected by the literary society and the public at large.

This rejection, among others, didn't prevent Rodin from becoming the most famous artist in the world at the beginning of the 20th century.  He is best known for the marble sculpture The Kiss and the bronze, The Thinker.   Not to mention there's an entire museum in Philadelphia, the Rodin Museum, devoted to the man.

Labels: a painting a day, Art Institute of Chicago, art museum, Auguste Rodin, bronze, figurative, Honore de Balzac, Karin Jurick, man, oil, sculpture
Newer Posts Older Posts Home
Subscribe to: Posts (Atom)
“It seems to me very important to the idea of true democracy - to my country - and to the world eventually - that all men and women stand equal under the sky...” - Georgia O’Keeffe