Progress and Other Stuff 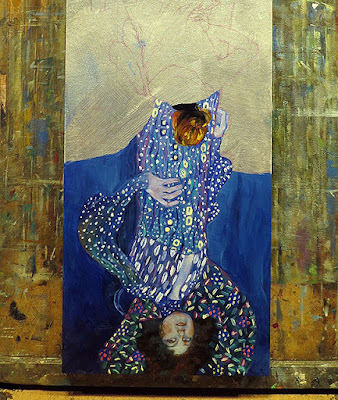 I'm determined to not use my large stand-up easel - I prefer to sit - so I've been painting small portions at a time, working my way down.  It's a hoot.  And it's working.

The hardboard panel is 7 x 24",  I painted an acrylic metallic silver w/a dash of blue mixed in to get a cold ground color - the photos look warmer because of my lighting.  Like my recent painting 'Women In Gold',  I wanted a little shimmering showing thru the oils.

Just wanted to show my progress.

I also spent time completing a new book on my series ArtistZ,  now I'm waiting for my copy to arrive to proof it before I offer it for sale.  And I created a 2016 calendar - inspired by all my recent art history lessons for the series - included are the birthdays of many artists I love.  I think if you're an artist yourself, you'd like it.

Back to work for now ~ 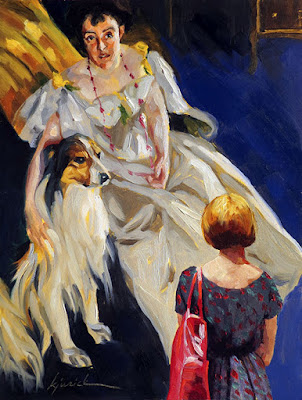 I easily chose Anders Zorn for my final painting in my series ArtistZ - I discovered him when I read Charley Parker's post on my favorite art blog Lines and Colors back in the spring.  When I delve into Zorn's bio and paintings, I realized I had seen his work before - and I probably thought his large portraits were those by John Singer Sargent because they feel like Sargents in many ways.

The Isabella Stewart Gardner Museum in Boston held an exhibit in 2013 "Anders Zorn: A European Artist Seduces America" revealing a competitive rivalry between Zorn and Sargent - both painters were involved in the coveted commissions from the high society during the Gilded Age.

In Charley Parker's post - he writes about Zorn's portrait of Mrs. Walter Rathbone Bacon, commissioned by Edward Rathbone Bacon, her brother-in-law and a very powerful, wealthy railway magnate (much like George Vanderbilt II, who commissioned Sargent on several occasions).   In fact, Sargent painted his sister-in-law, but Edward wanted Zorn to attempt a 'better' one.

The story goes that Sargent saw Zorn's painting at the Paris Salon and conceded Zorn had 'won a brilliant victory'.

Anders Zorn is one of Sweden's most celebrated artists to this day.

Being that I've wrapped up my series ArtistZ,  I want to say how much I've enjoyed digging into bios and really looking at all the artist's works - I never took an art history course back in the days and learning more is always rewarding when it comes to artists and painting.  It drives me.  It inspires me.

Here are some useful websites if you want to discover artists ~

And then there's my favorite, Sister Wendy, who has opened my eyes on a lot of art that I'd never thought about.

Onto another painting for the show at the Vendue.

Have a wonderful Thanksgiving ~ 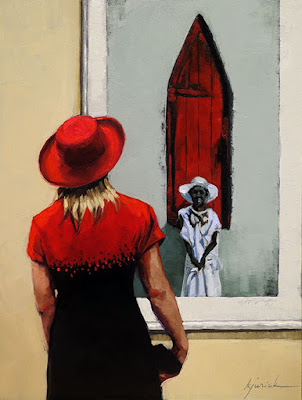 I chose the artist Stephen Scott Young for the letter Y in my series ArtistZ.

Stephen is just a little older than me.  I've admired his paintings and etchings for years, dating back to my early framing career in the early 80's when I frequently framed prints of his work.  To think he was painting such beautiful watercolors at the age of 20ish-years-old was inspiring - it made me want to be an artist.

Stephen is a graduate of the Ringling School of Art, one of my-then top choices for art school - he took his first trip to the Bahamas in the early 80's and fell in love with the clear, natural, sparkling light and the people who have been many subjects in his paintings thru the years.  The painting I chose is titled 'Faithful', one of my personal favorites.

Around 2007, I got a call from an owner of the Morris & Whiteside Gallery in Hilton Head - a gallery that I had bookmarked for several years because Stephen Scott Young was one of the artists represented.  I was stunned that Ben Whiteside, one of the owners, was interested in my work considering the league I would be joining.  The first time I saw my painting hanging next to Stephen's,  I was floored.  And I still am to this day. 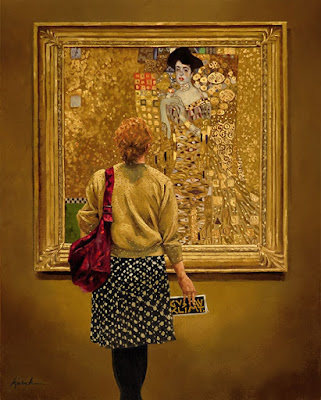 The Robert Lange Studios, in Charleston, invited me into another group show - titled 'Silver vs. Gold' which opens tonight at The Vendue in Charleston.  My painting will join the rest around December 1st.

I painted the ground color a blend of metallic golds, which peeks through the oil paint - also I applied spots of metallic golds in the Klimt painting, the woman's sweater and several other strategic areas.  It's very cool in person.

The Klimt painting I feature is the famous 'Portrait of Adele Bloch-Bauer I', also the subject in the movie 'Woman in Gold'. 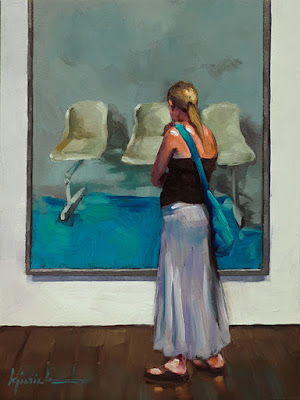 For the letter X in my series ArtistZ,  I spent, I'm guessing, five or six hours researching and hunting an artist.  Google painters who's name begins with the letter X and you'll find hundreds of mostly Chinese artists, a small number of Greek and a handful of other nationalities.  At one point, I went to the New York Times archive, because I vaguely remembered the artist Sun Xun, written about several times in past few years and I found him.  Sun Xun lives and works in Beijing, he's around 36 years old, which is impressive given his wide range of mediums and amount of work.

Quite frankly, I don't respond to most of Xun's works, he has explored mixed media, animation, block printing, ink drawings and painting - and I zeroed in on an exhibit in 2012 titled 'These Years', a collection of mixed media oils that include still life, landscapes and figuratives, including my choice piece Waiting.   I just love the grey-green tones and the strong turquoise/aquas together.

The artist and blogger, Kelley Sanford, has included me in her 'Ask the Expert' series on her blog In The Artist's Studio on today's post - I talk a little bit about painting a series, how I decide on the subject and generally about painting.

Be sure to read her past posts - it's always helpful to know how other painters tick. 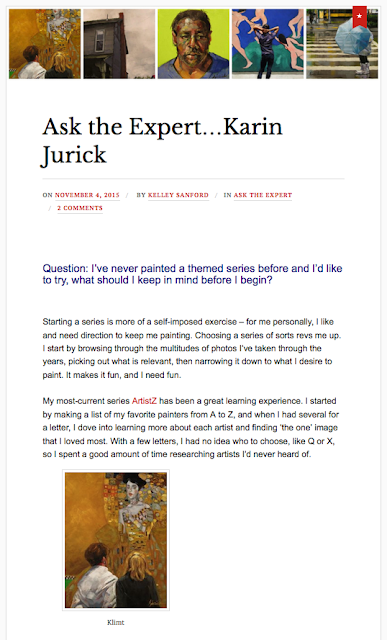