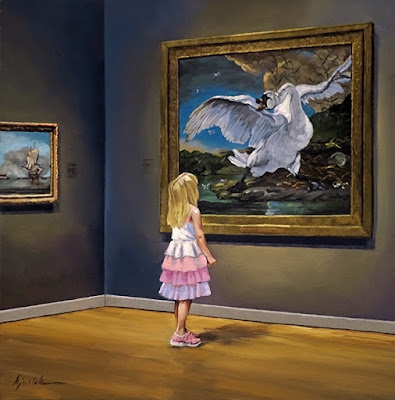 With my own traveling restricted most of this year and museums around the country closed until further notice, there have been many generous friends on Instagram who've allowed me to use their photos as a painting reference, including the one used for this painting.  Thanks to Jelmer, who photographed in Amsterdam's Rijksmuseum.

The little girl is viewing the very dramatic The Threatened Swan by Jan Asselijn - and the story behind, what was the Rijksmuseum's first acquisition, is so interesting.  Asselijn painted this piece in 1650 - at first glance it's a furious swan defending her nest against the approaching dog on the bottom left (hidden behind the girl's head).  A closer look reveals three inscriptions - under the swan, translated, The Grand Pensionary, on one of the swan's eggs, translated, Holland and above the dog's head, translated, The Enemy of the State.

At the time the museum acquired the painting, it was understood as alluding to the famous Dutch statesman, Johan de Witt, who was the foreign policy guy also in charge of the commercial interests of Holland.  He strove for peace with England, a competitor and enemy of the province at the time.  De Witt's family symbol was also a swan, so it seemed obvious - the English dog threatening the swan symbolizing the enemy of the state.  You get the picture.

But.... there's a big but - years later, someone realized the artist in fact died before De Witt even started his political career and he probably had no intention of his painting being propaganda.  It was then the museum discovered the inscriptions were added later but by whom remains a great mystery.

The painting on the girl's left is The Cannon Shot by Willem van de Velde the Younger. 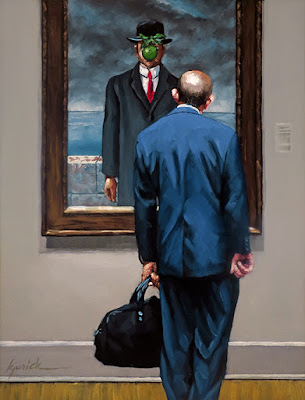 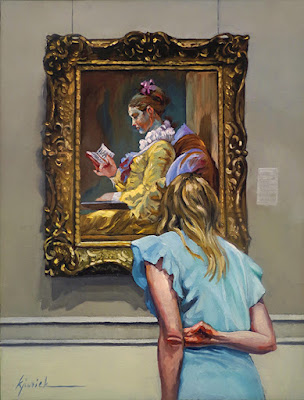 During most of the 1700's the artist Jean-Honore Fragonard was a painting rock star.  The Rococo era, by definition, was characterized by "hedonistic freedom and a pursuit of all things aesthetically pleasing" and Fragonard was all about that.  His fantasy female figures are the epitome of femininity - calm, docile, frilly collars and dresses, playfully tossing their children in the air - you get the picture.  And that was the rage in the 18th century, with respect to how women were portrayed on canvas.

Although Jean-Honore Fragonard's style fell out of favor as the 1800's began, Young Girl Reading was and still is one of Fragonard's most popular images.  I can attest to that because I framed multiple prints of it during my picture-framing years.  It's a classic. 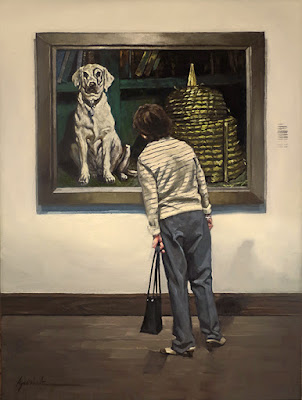 Jamie Wyeth, the son of the great artist Andrew Wyeth and the grandson of the illustrator and artist N. C. Wyeth is a giant to me.  He remains tireless and prolific - my favorites are portraits of Andy Warhol and the Soviet dancer Rudolph Nureyev, his gigantic portraits of pigs and any painting with a dog.

Meet Kleberg, Jamie Wyeth's yellow lab.  As the story goes, told by Jamie in a Saturday Evening Post article, one day, Kleberg got a little too close to his easel and he spontaneously painted a black circle around Kleberg's eye to make him look like Petey from the Little Rascals.  Kleberg seemed to enjoy the extra attention so Jamie switched to a black mustache dye that lasted longer, remarking "Kleberg would come to me when it needed touching up."  And that circle remained for the rest of Kleberg's years.

The painting Kleberg includes a Victorian skep or beehive, woven from straw - essentially a basket placed upside-down - used to house bees for some 2000 years. The books on the shelf reflect Jamie's favorites, including Treasure Island, illustrated by N. C. Wyeth, Howard Pyle's illustrated Pyle's Book of Pirates and a biography of John F. Kennedy, who's portrait Jamie was commissioned to paint.

Kleberg can be viewed in the Denver Art Museum.

Labels: a painting a day, art museum, Denver Art Museum, dog, figurative, Jamie Wyeth, Karin Jurick, Kleberg, oil, woman
Newer Posts Older Posts Home
Subscribe to: Posts (Atom)
“It seems to me very important to the idea of true democracy - to my country - and to the world eventually - that all men and women stand equal under the sky...” - Georgia O’Keeffe