A Conversation with Antrese on The Savvy Painter Podcast

I am a huge fan of The Savvy Painter Podcasts and I was honored to be interviewed by Antrese Wood, who is great at hosting artist interviews and she's an artist herself. 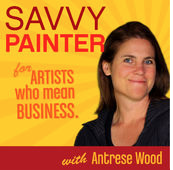 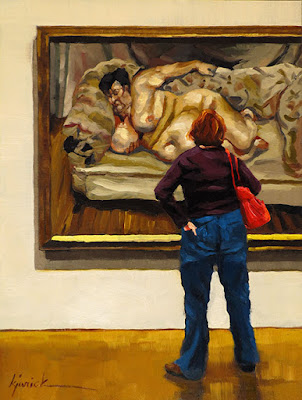 Lucian Freud is on the top of my list of most influential painters and one of the greatest figurative artists of the 20th century.   I have many books of Freud's works of art and the first one I saw in person was in the Cleveland Museum of Art.  I was in awe.

The first time I saw Freud's painting 'Benefits Supervisor Sleeping' I was stunned, like most, of the large, nude model, Sue Tilly - a woman who posed for him many times in the 80's.  Freud said of her body 'It's flesh without muscle and it has developed a different kind of texture through bearing such a weight-bearing thing.'  For some, there may be no beauty in a body like Sue Tilly's - but I see wonderful folds and curves and a real woman with no shame.

The most influential thing about Freud's portraits is the skin tones that include golds, ochres, greens, greys, blues, reds, oranges, purples.  Did I leave anything out?  That is the lesson and something I try to carry into my figurative paintings.

I know, I'm gushing.  Freud is my new addition to my series ArtistZ. 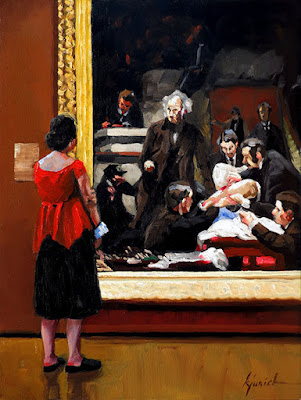 I chose Thomas Eakins for E in my new series ArtistZ  because I've had a long love affair of Eakins' work since I first saw his paintings in the Philadelphia Museum of Art in the 70's.  About seven years ago, I went back to the museum and spent a good hour looking at this enormous masterpiece 'Portrait of Dr. Samuel D. Gross (The Gross Clinic).  I've seen it in books and the internet, but nothing comes close to viewing it in person.  You feel like you're in the room.  It is beyond awesome. 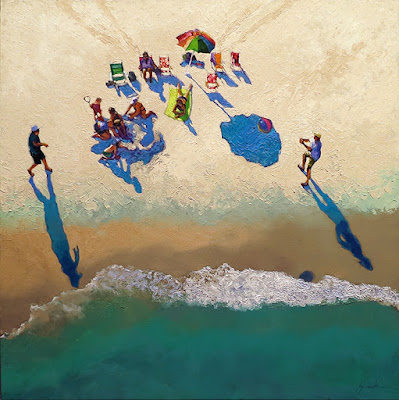 Robert Lange Studios asked me to do another painting for their "Fluent" show - which is currently showing at the Vendue Hotel in Charleston until mid-November.  My first one 'Cannonball' sold on opening night, so I was psyched to do another.

I started this, got ill, got better and resumed and got ill again - which turned out to be a great thing because the first layer dried, which doesn't normally happen before I finish a painting.  When I resumed a couple of days ago, I switched to a palette knife, which totally changed the vibrancy and added the texture to the sand and waves.  I have to say, this is one of my all-time favorite paintings ever. 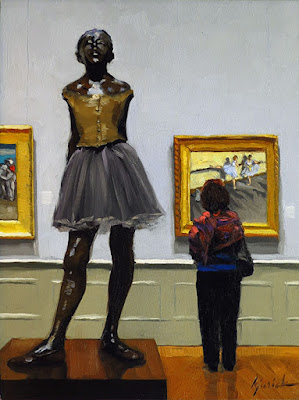 Back to work today after a brief relapse.  I don't know what's worse, the illness or the antibiotics.  Today has been a promising day.

From the Metropolitan Museum of Art in New York City, a woman admires Degas' 'Dancers Practicing at the Barre' with his bronze 'The Little Fourteen-Year-Old Dancer' in the foreground. 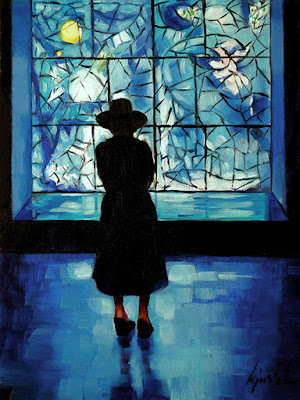 I'm coming back to life and painting again.  Yay.

Continuing with my new series ArtistZ - a woman standing in the blue light of one of Marc Chagall's 'America Windows' in the Art Institute of Chicago.

Chagall makes me happy, calm.  The paintings can be complex, with movement and scenery and music playing.  My favorite painting of Chagall's is 'Lovers In a Red Sky'. 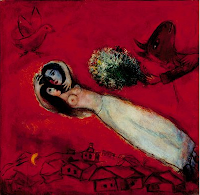 I'm slowly climbing out from under a rock.  Really from under the covers.   Stricken with a stomach or intestinal virus that wiped out almost an entire week.  I know it could always be worse, but I'm sure it could be better.  Little by little, jello by jello....  I'd really like to get back to normalcy again and start painting.

For now I've got to tell you all about the Small Works Auction taking place this Saturday at the Sylvan Gallery in Charleston, SC.  I've got three, framed paintings in the auction and you have a great opportunity to get an excellent deal. 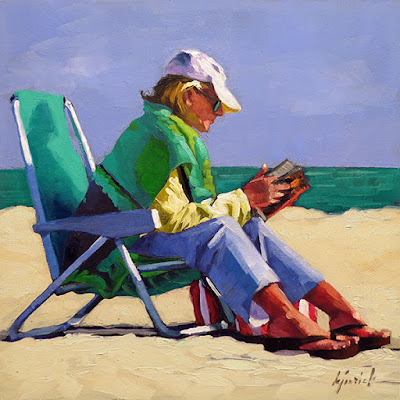 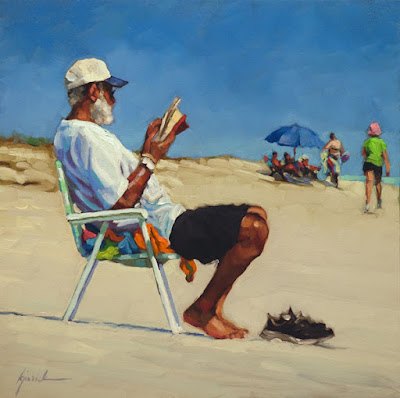 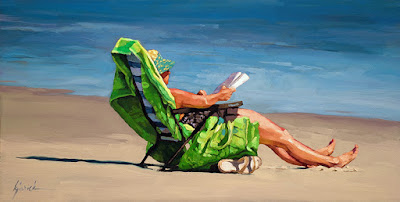 There are 173 pieces in the auction including artists Kim English, Ken Auster, Joe Larusso, Steven Scott Young to list a few.  This is the way to start or add to your art collection for sure. 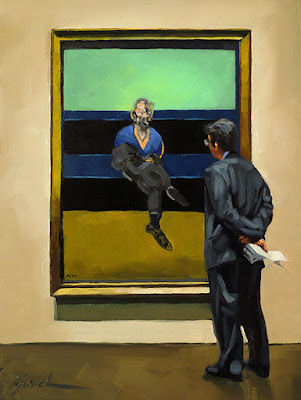 A new addition to my series ArtistZ - featuring one of my favorite paintings by Francis Bacon.   It's tough to pick a favorite of Bacon's, I suppose this piece has a figure sitting and I often paint that subject.  And I dig those colors together, the mustard-gold, navy blues and that neon green in the top third.

One of the first artbooks I bought, years ago, was of Francis Bacon's work - I was very into the illustrators Brad Holland and Marshall Arisman - both painted strikingly-dark subject matter, a bit eerie, perfect for illustrating dark stories.  Those years I dreamed of being an illustrator.  Bacon was very much the same vein, but his compositions and large blocks of color around figures, his distorted figures, his macabre, nightmarish works really grabbed me.

This painting by Bacon featured in my painting is one of many studies of Peter Lacy, whom Bacon had a tempestuous relationship with until Lacy's death in 1962. 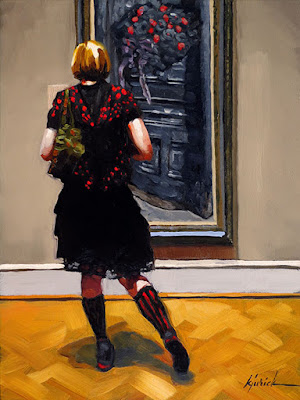 For me, working on a theme gives me direction and motivation, both of which are sometimes hard to come by if you're a painter.

So I've come up with a new series I'm psyched about titled 'ArtistZ' - inspired by the artists I greatly admire, from A to Z.   It took about five minutes to list 23, with U, X and Y still to be determined.  Those 23 were easy, artists I've loved for years - through artbooks and visits to museums.

Starting with A - Ivan Albright.   As a teenager, I discovered Albright in the Art Institute of Chicago.  Two of his large, tall paintings hung on each side of a threshold and I'd beeline straight to those paintings as soon as I entered the museum.   His famous 'Picture of Dorian Gray', commissioned for the title painting in the 1943 movie and 'That Which I Should Have Done I Did Not Do (The Door), which is my personal favorite, featured in my painting.   Years back, I traveled all the way to New York City to see a retrospective of Albright's work at the Metropolitan Museum of Art - so very unforgettable.

What I love about Albright's work is how meticulous he worked, his fascination with decay and death as subjects and his self-portraits that were done in various styles through many years of his life.

I hope you enjoy this new series.

Labels: a painting a day, Art Institute of Chicago, art museum, figurative, Ivan Albright, Karin Jurick, oil, woman
Newer Posts Older Posts Home
Subscribe to: Posts (Atom)
“It seems to me very important to the idea of true democracy - to my country - and to the world eventually - that all men and women stand equal under the sky...” - Georgia O’Keeffe