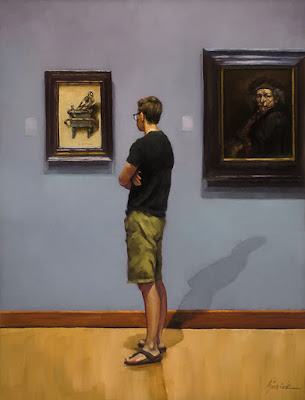 You are probably aware there is currently a film out based on Donna Tartt's novel The Goldfinch, largely revolving around a 1654 painting by the Dutch artist, Carel Fabritius.  The actual painting resides in the Mauritshuis in the Hague, Netherlands.  In 2014, it went on a world tour and landed in the Frick in New York around the same time Tartt's best-selling novel won the Pulitzer Prize in Fiction.  Over 61,000 people visited the Frick just to see Fabritius' painting.

The real story behind the painting The Goldfinch - the artist, Carel Fabritius, lived in Delft, was a well-known artist and a student of Rembrandt's and in 1654, a gunpowder factory next to Fabritius' apartment exploded.  Ninety-thousand pounds of gunpowder exploded five times in what was known as the Delft Thunderclap.  The explosion killed over 100 people, including Fabritius and destroyed a quarter of the city.  The artist was 32 years old.  Six paintings were retrieved from his apartment, including The Goldfinch.

Interestingly, the real painting's history has some similarities to the novel, although the author said she never knew about the Delft Thunderclap event and chose a painting that would appeal to a child and small enough to carry.  Also, at the time of the artist's death, he was working on a portrait of a local church deacon, Simon Decker, who had the same name as the main character in Tartt's novel.

Hanging next to The Goldfinch is Self-Portrait by Fabritius' painting teacher, Rembrandt. 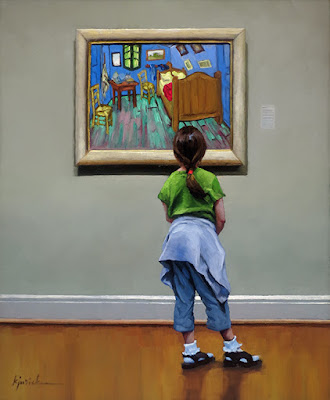 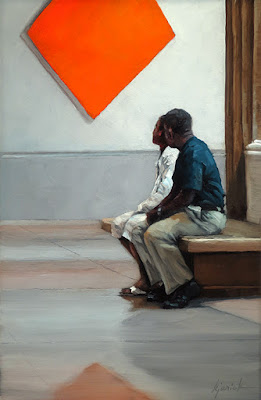 I thought this different view of a different one of Ellsworth Kelly's Chicago Panels made a potentially good companion piece to Umbrella Stand you see on the post before this one.

I love the subtle colorful reflections on the marble floor in both scenes.  And note what I mentioned in the post below, that Kelly's inspiration for the six Chicago Panels was observations of various birds, this red panel presumably from a cardinal.

From the second floor in the American Art Wing of the Art Institute of Chicago. 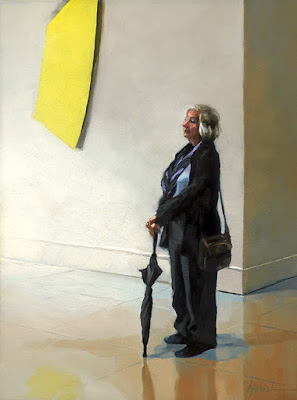 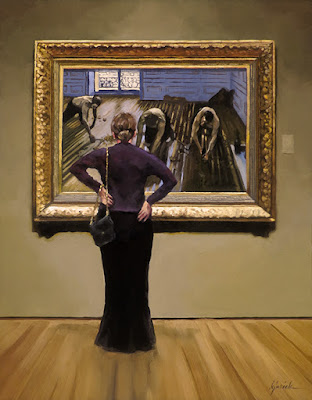 Labels: a painting a day, Art Institute of Chicago, art museum, figurative, French Impressionism, Gustave Caillebotte, Karin Jurick, oil, The Floor Scrapers, woman
Newer Posts Older Posts Home
Subscribe to: Posts (Atom)
“It seems to me very important to the idea of true democracy - to my country - and to the world eventually - that all men and women stand equal under the sky...” - Georgia O’Keeffe