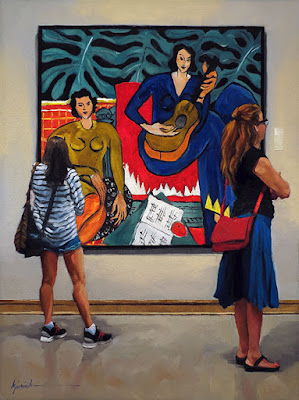 Henri Matisse was born in 1869 in Northern France, the oldest son of a rich grain merchant.  His father sent him to law school in Paris, and after an attack of appendicitis, his kind mother brought him art supplies to occupy his days in recovery and Henri discovered "a kind of paradise"  - then deciding he was to become an artist rather than a lawyer.  Imagine that - an appendicitis attack gave us the great Henri Matisse.

Henri was serious about art - creating paintings, sculptures, cut-out collages and stained glass windows right up until his death at the age of 84.  What is recognizable in many painting is the repetition of colors and pattern and a general feeling of harmony.

The Music (La Musique) was painted in 1910, commissioned by a wealthy Russian who hung it with The Dance on the staircase of his Moscow mansion.  It is said Matisse created the painting without any preparation or sketches, like Dance, aiming to show a 'state of complete immersion in creativity'.  I love this quote from Matisse, saying his ultimate goal was to create "an art of balance, of purity and serenity, devoid of troubling or depressing subject matter, an art which could be for every menial worker, for the businessman as well as the man of letters, for example, a soothing, calming influence on the mind, something like a good armchair which provides relaxation from physical fatigue".

From the Albright-Knox Gallery in Buffalo, New York - women surrounding The Music by Henri Matisse.

"Love Is In The Air" 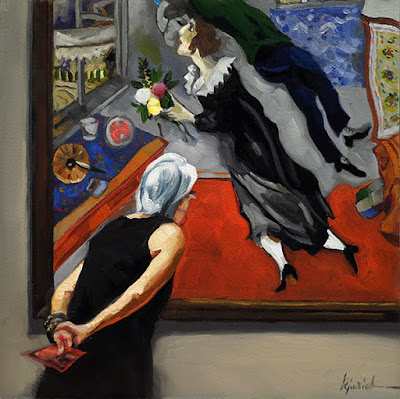 The artist Marc Chagall called 'love' the primary color of his paintings.  They are rich with Russian culture.  You hear the music.  You feel the love.

Chagall's Birthday depicts the artist floating and swooping over his wife, Bella, to kiss her on her birthday.  Or his birthday - different accounts claim one or the other.  The couple met in their hometown of Vitebsk, Belarus in 1909 - he was twenty-two and she was fourteen.  Chagall was the son of a working-class Hasidic Jewish family - Bella was born to one of the town's richest Jewish families.  Despite her family's misgivings about the union, Marc and Bella married in 1915, had a daughter, moved to rural France, fled from the Nazi regime to Lisbon and then to the United States and remained happily married until Bella's death in 1944.

In her memoirs, Bella recounts how she worked at finding Marc's birth date and visited him on that day, carrying flowers as he began the paint.  "Spurts of red, white, black.  Suddenly you tear me from the earth, you yourself take off from one foot.  You rise, you stretch your limbs, you float up to the ceiling.  Your head turns about and you make mine turn.  You brush my ear and murmur."

How sweet is that?

From the Museum of Modern Art in New York City, a woman leans in to admire Chagall's Birthday. 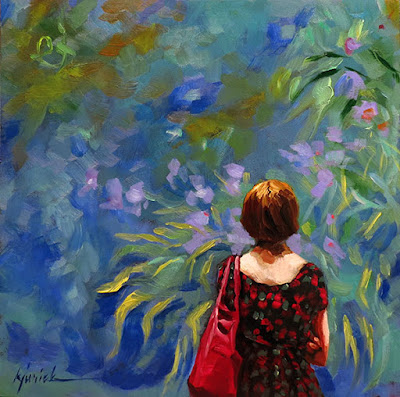 In need of a moment of Zen?  Spend some time in an art museum.  Put your phone on silent.  Step into another time.  That's what painting can be like.  A removal from the present.  Imagine painting a huge canvas with your garden surrounding you.  Nice thought.

Claude Monet was 74 years old when he began painting Irises in 1914.  He had gained financial and critical success in the late 1800's, he and his second wife and their combined family were living in Giverny where he frequently painted outdoors in the gardens he helped create.  In 1911, his wife Alice passed away, he had developed cataracts in one eye - yet he took on a large commission by the Orangerie des Tuileries museum in Paris to complete twelve waterlily paintings.  He wanted his pieces to serve as a 'haven of peaceful meditation' to soothe the 'overworked nerves' of the visitors.

Irises stands out as more painterly, with almost a stucco surface of thick, broad brushstrokes capturing the light and color Monet struggled to see clearly.  Stand in front of it and you can see his progressions and strokes as he works on layers upon layers.

From the Art Institute of Chicago, where you can find many extraordinary works by Monet.

I took the week to visit a good friend.  We spent our time painting together and eating wonderful dinners.  A most perfect week.

Wanted to show you a new book of poetry by Emily Blewitt, titled This Is Not A Rescue.  The publisher Seren Books is located in Wales - they contacted me asking if I would provide the artwork
for the cover and I gladly agreed. 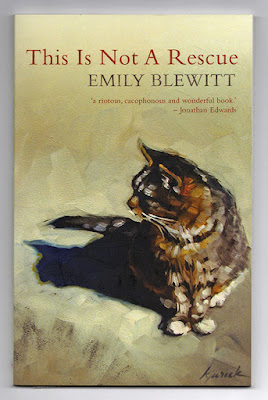 You can order a copy here.

Back to painting tomorrow. 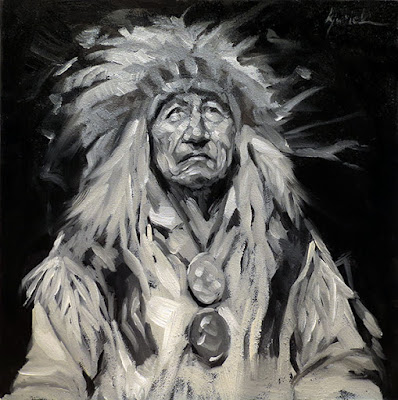 I've been a bit stagnant lately with respect to painting.

It's normal.  Typically happens after a long stretch of painting for a show.  The well goes dry.  It's normal.

To the surprise of many, I get inspiration from television.  An image will appear or colors will stand out that impress my brain.  Subjects come up and I make a mental note.  I watched a segment recently about the Osage Indians in Pawhuska, Oklahoma - I was born somewhat near the area - so I paid a little more attention to the story which was mainly about the horrible murders of many tribe members in the early 20th century.

The photos of the Osage were stunning.  The faces, the bone structure... I am always consumed by the human face and form.  That was why I began the BUST-ED series and continue that curiousity.  So I've been pouring over photographs from over 100 years ago of various Native Americans, in awe of their beauty and dignity.

And it's something different for me - to paint with black and white.  It led me to this new painting - a portrait of Big Man.  He was of the Sicangu Oyate Tribe, a branch of the Lakota people who's home is South Dakota.  I don't know much about this gentleman, but Big Man in many tribes all over the world means the patriarch or a highly influential individual.  I found him to be an inspiration.

Labels: a painting a day, Karin Jurick, Lakota, man, Native American Indian, portrait, Sicangu, South Dakota
Newer Posts Older Posts Home
Subscribe to: Posts (Atom)
“It seems to me very important to the idea of true democracy - to my country - and to the world eventually - that all men and women stand equal under the sky...” - Georgia O’Keeffe