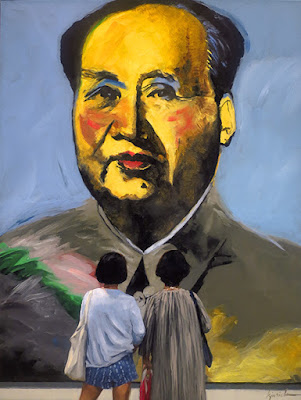 Andy Warhol created many versions of the Chinese leader Mao Tse-Tung, from small to enormous.  In the Art Institute of Chicago, his Mao, 1972, which measures nearly 12 feet wide by 15 feet tall, can't be missed.

To understand why Warhol painted Chairman Mao is to know the artist and his fascination with celebrity and fame.  He created silk-screens of Marilyn Monroe, Jackie Kennedy and Elvis to name a few. He contemplated what it meant to be famous and what it could possibly be worth to the world.

Warhol had read in Life magazine that Mao was the most famous person in the world and the forced ubiquity of the Chinese leader's image throughout his country inspired Warhol - also considering his image would lend itself to silk-screen.

Mao is said to be Warhol's first political portrait, even though he never openly stated his political views.  His widely known works had a focus on condemning the relentless consumerism of an American capitalism and the advertising giants who hammer these images into our brains - think Campbell soup cans, Coca-Cola, etc. - and his Mao portraits virtually said the same thing.  Controlled propaganda selling Communism in China. 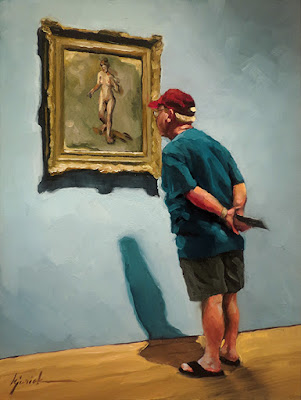 My oh my, I'm glad to be back to painting a few small pieces.  I've been working on several projects for future group shows which you'll see down the road.

Thomas Eakins is best known for his paintings of athletic rowers on the Schuylkill River in Philadelphia and his extraordinary painting The Gross Clinic.  He taught at the Pennsylvania Academy and those paintings brought him fame and transformed the school into the leading art school in America.

Eakins found the study of anatomy to be essential in his teachings, however, it was frowned upon by the academy and Victorian Philadelphia in the 1880's.  After treading on ice, during one of his live model classes, he removed a loincloth from a male model to show the trace of a vital muscle and all hell broke loose.  Protests by students and parents forced Eakins to resign at the request of the Academy's board.

The Model by Thomas Eakins is part of the collection in the Crystal Bridges Museum of American Art in Bentonville, Arkansas.  Get to this museum if you can.  It's so worth the trip.

Labels: a painting a day, art museum, Crystal Bridges Museum of American Art, figurative, Karin Jurick, man, nude, oil, Thomas Eakins
Newer Posts Older Posts Home
Subscribe to: Posts (Atom)
“It seems to me very important to the idea of true democracy - to my country - and to the world eventually - that all men and women stand equal under the sky...” - Georgia O’Keeffe