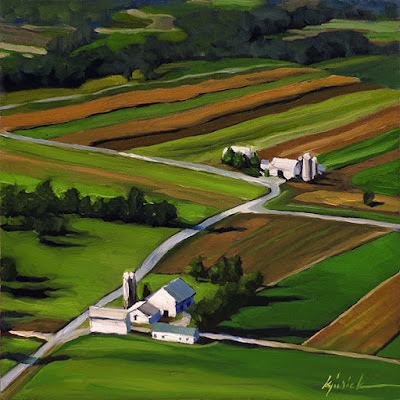 I was quite hypnotized last night watching one of my favorite TV programs - Aerial America, on the Smithsonian Channel.  I saw hundreds of paintings in my head - patterns and patchworks of colors and shapes - I just wish I could cruise over land like a bird.  With a camera.  Aerials get me so excited for someone afraid of heights.

Between the hours-long paintings I'm working on for an upcoming show, I am in need of letting loose, with no worries of details, no sketching, just swirling the oils around.  So with great inspiration from my favorite program, I hope to continue this series for a while and hope you enjoy the view.

This bird's-eye perspective is over the farmlands of Pennsylvania.

~ and a Happy New Year to you. 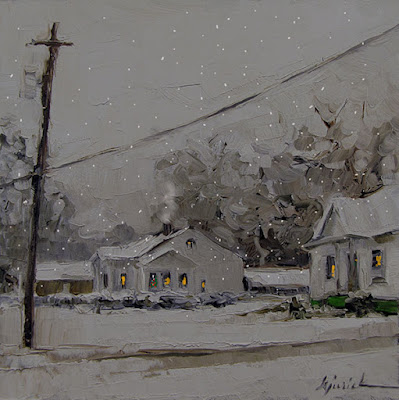 Wishing you and yours
Peace & Love 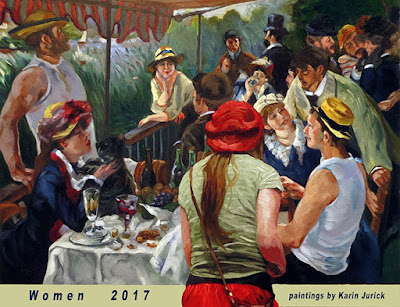 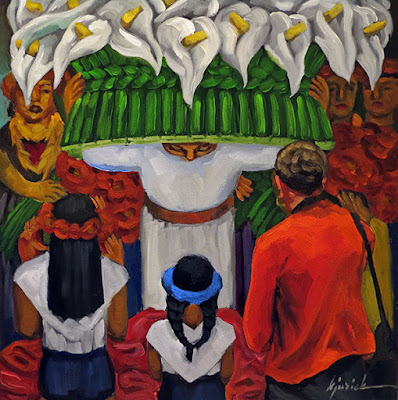 A couple of things I need to mention here - you don't see much progress on my blog because I'm working on paintings for a solo show held in early March.  It kills me not to reveal them as I go.

And... for those who've asked?  I have a calendar not quite ready, I know it's late in the year, but it's coming and I'll shout from the mountain top when it is.

Now for the artist Diego Rivera.  Born in 1886 in Guanajuato, Mexico - a large, colorful, overbearing, talented painter best known for his depictions of the working class and native Mexicans.  At the age of 35, through a government program, he painted a series of murals in public buildings about the country's people and its history, some controversial and all very powerful.

Rivera was a lady's man, married twice before marrying the artist Frida Kahlo who was 20 years younger - both known for their interest in radical politics and Marxism.  They fought often and divorced and remarried in 1940 - Kahlo died in 1954 and Rivera married again, to his art dealer.  He died several years later from cancer and heart failure in 1957.

Rivera's Flower Festival was painted in 1931 depicting a flower festival held on Good Friday in Santa Anita, included in a solo exhibition at MoMA the same year. 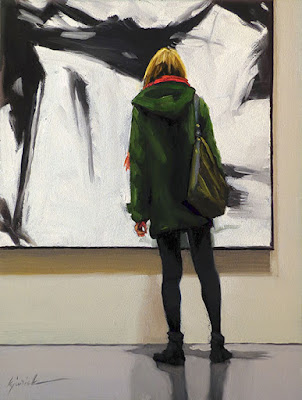 From inside the National Gallery of Art in DC, a woman viewing one of Franz Kline's powerful abstracts.

Labels: a painting a day, abstract expressionism, art museum, figurative, Franz Kline, Karin Jurick, National Gallery of Art, oil, Washington DC, woman
Newer Posts Older Posts Home
Subscribe to: Posts (Atom)
“It seems to me very important to the idea of true democracy - to my country - and to the world eventually - that all men and women stand equal under the sky...” - Georgia O’Keeffe