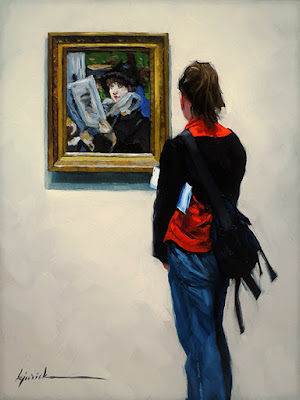 I took a break from a larger painting and enjoyed a looser, more painterly scene in the Art Institute of Chicago.  Edouard Manet's Woman Reading is in the company of other French Impressionists in a very popular gallery at the museum - frequently mixed up with Claude Monet, another famous Impressionist.

Woman Reading was painted in Manet's later years, a very quick-brushstroke, almost plein-aire quality of a young, modern woman taking a break at a cafe with a magazine and a beer.  If you're ever standing in front of this painting, look close, the brushstrokes are numerous and somewhat frantic - as if he was trying to capture the woman before she gets up and leaves the cafe.  And multi, multi, colors layered on top of other colors - the definition of Impressionism.  I tried my best to let loose - loving the form of the woman viewing the painting. 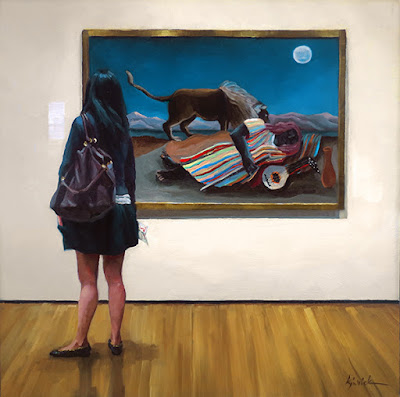 When you think of the French artist Henri Rousseau, you envision paintings of imaginery jungle settings and various animals.  My new painting features his deviation from the norm - The Sleeping Gypsy - described by Rousseau this way: 'A wandering Negress, a mandolin player, lies with her jar beside her (a vase of drinking water), overcome by fatigue in a deep sleep. A lion chances to pass by, picks up her scent yet does not devour her.  There is a moonlight effect, very poetic."

Rousseau was a self-taught artist, an artist before his time in many ways.  In The Sleeping Gypsy he incorporates key items from different countries - the African woman wearing an Oriental frock, the Italian mandolin - items customary to their respective cultures.  That was different in the world of painting.

Stand next to this painting in the Museum of Modern Art and no doubt you'll eavesdrop on someone who points out the symbolisms - the lion representing power, the sleeping gypsy representing peace, the moonlight representing calm and possible unity.  Interestly, Rousseau had a difficult time selling this painting.  It changes hands several times - first to a French charcoal merchant, then to an art dealer until a controversary arose whether the painting was a forgery.  I mentioned it was a deviation from the normal paintings Rousseau was known for - that was the basis of the claim, albeit a stupid one.  It was finally purchased by the art historian Alfred Barr Jr. for the MOMA. 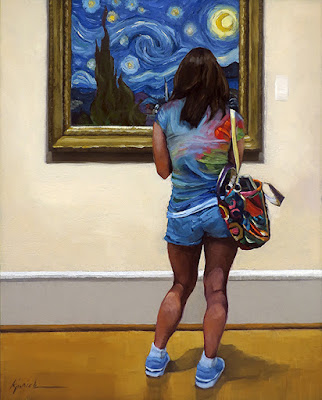 We are the fortunate ones here in the United States.  We can see Vincent van Gogh's iconic The Starry Night in person in the Museum of Modern Art in New York City.  We're lucky that way.

In 1888, Vincent van Gogh was hospitalized at Saint-Paul-de-Mausole, an asylum for the mentally ill, after a breakdown. During his stay, he was encouraged to paint - and although he rarely ventured far from the building, he painted landscapes from his view through a window in his private room.  The Starry Night was an amalgamation of church spires and cypress trees and small villages and night sky constellations he drew from his memory of paintings done in the past.

His brother Theo thought the painting to be too stylized, too exaggerated but it has become one of the most recognized van Gogh masterpieces for decades.  Seeing a van Gogh in person is special - the colors are vivid and saturated, the thickness of the paint, the swirls and movement of pigments all give it motion and life.  There's nothing like it.


A shout-out to my good friend, Karen Hollingsworth, who has an opening tonight at the Principle Gallery in Charleston SC.  Go by the gallery this month if you're in the neighborhood.

Here's one of my favorites.... 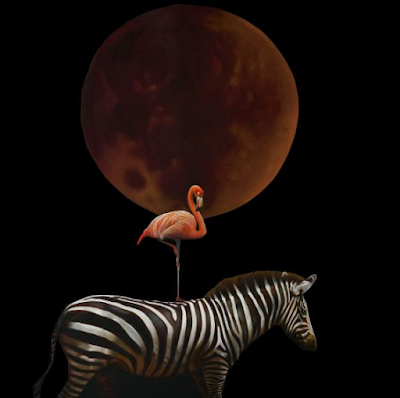 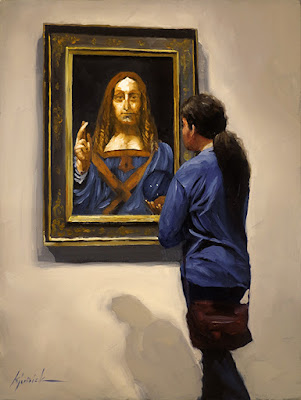 Labels: a painting a day, art musem, figurative, Jesus Christ, Karin Jurick, Leonardo da Vinci, oil, portrait, woman
Newer Posts Older Posts Home
Subscribe to: Posts (Atom)
“It seems to me very important to the idea of true democracy - to my country - and to the world eventually - that all men and women stand equal under the sky...” - Georgia O’Keeffe