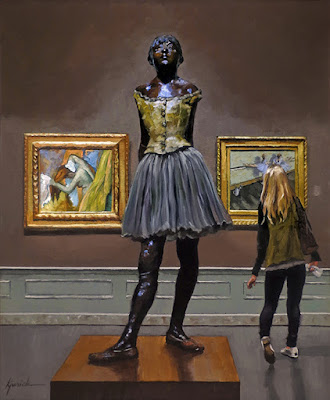 My new painting features Edgar Degas' paintings Woman at Her Toilette and Dancers at the Barre with the bronze sculpture The Fourteen Year Old Dancer front and center.

From the Metropolitan Museum of Art in New York City. 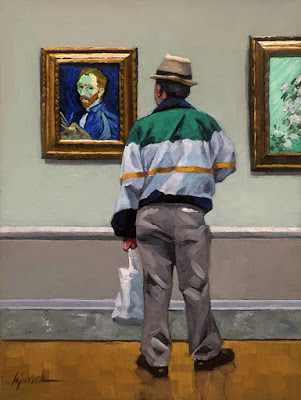 I loved this man I spotted in the National Gallery of Art.  First glance, I assumed he was dragged to the museum but he stopped at every single painting during the five or ten minutes I watched him.  He seemed truly interested in any artist, any subject, and in any room.  He spent more time with Vincent van Gogh's work - most visitors do because they know who van Gogh is.

Vincent van Gogh painted 36 self-portraits in his short career of a mere 10 years.  Early on, he concentrated on landscapes and still life and a few portraits but after he admitted himself into the asylum of Saint-Paul-de-Mausole, still painting the fields nearby and surrounding landscapes, he suffered a severe breakdown.  Many believe his demise resembled the symptoms of epilepsy, but the disease was not understood at the time.  Vincent was incapacitated for five weeks and retreated to his studio, during which he painted the Self-Portrait you see in my painting.

This self-portrait is a standout - done in a single sitting - the artist dressed in his smock holding his palette and brushes.  His face is somewhat haunting, his awareness of his gaunt, pale face is painted with stark greenish/blue tones, the brush strokes are thick with paint.  Most of all, it feels intense as if van Gogh's anxiety was portrayed so honestly.  Within a year, in 1890, the artist was dead at the age of 37.

The astounding legacy Vincent van Gogh left, in just a decade, was about 2,100 artworks including 860 oil paintings.  A fact I still can't comprehend. 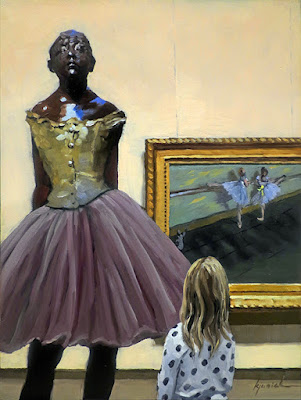 Labels: a painting a day, art museum, Edgar Degas, figurative, French Impressionism, girl, Karin Jurick, Metropolitan Museum of Art, New York City, oil
Newer Posts Older Posts Home
Subscribe to: Posts (Atom)
“It seems to me very important to the idea of true democracy - to my country - and to the world eventually - that all men and women stand equal under the sky...” - Georgia O’Keeffe