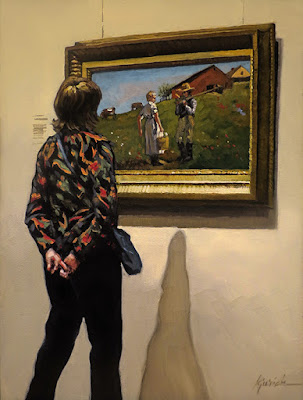 "Color is the New Black" 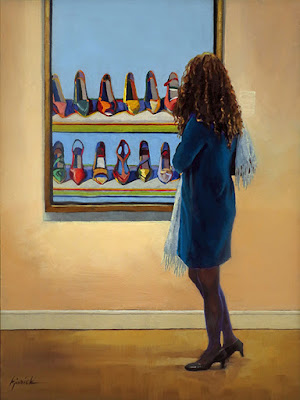 When it comes to really feeling the joy of a painting, top of my list is dogs.  Second is featuring any painting by Wayne Thiebaud.  He is a giant in my world.

Wayne Thiebaud has painted ordinary objects - wedges of pie, lipstick, sunglasses, neck ties, cupcakes, buckets of paint, gumball machines, shoes to name a few - for decades.  What sets him apart as a painter is he takes that subject, that thing, and injects life into it - with color.  Take one shoe you see in his painting Shoe Rows.  There is, approximately, no less than 10 colors of paint in that one shoe.  The edges vibrate. The devotion to every object and shadow is admirable.

And that's why this painting was pure joy to paint. 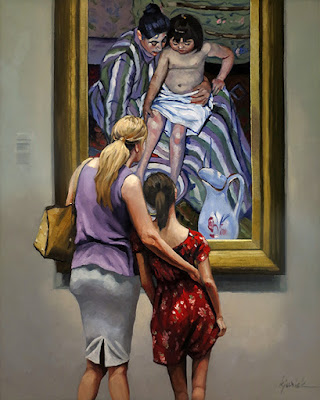 Well, after painting my smaller study you see on the post below, I jumped right into a larger, more-realized piece.  The Mary Cassatt painting is larger, the details are more crisp and that gives me so much more insight to her colors and edges.

Cassatt, like other artists in her time, were influenced by other cultures and their artwork.  Picasso found African masks his springboard to more geometric paintings which lead to Cubism.  Cassatt and Matisse were inspired by Japanese design and printmaking which lead to figures that appeared almost 2-dimensional or cut-outs.  They incorporated fabric patterns in backgrounds and clothing on figures, which was fairly uncommon in painting up until then.  That's why I say The Child's Bath is so quintessential Mary Cassatt. 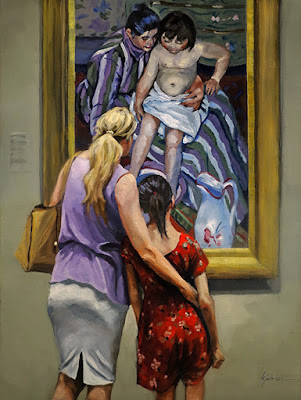 The whole time I was painting this, Paul Simon's song was going through my head.  A mother and daughter viewing Mary Cassatt's The Child's Bath.  Quintessential Cassatt - observing the intimate relationship between mother and child, with an influence of Japanese block print and patterns on patterns.

From the Art Institute of Chicago.

~ a thank you to Stephania for the partial use of her photo. 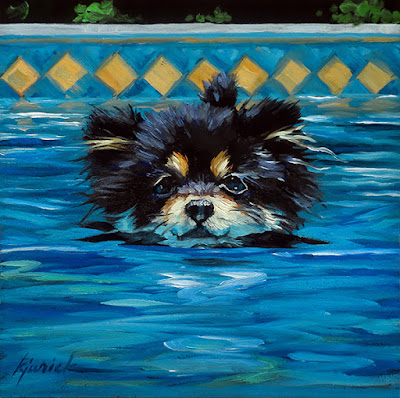 A gift for my neighbor on this 4th of July - the late and great Taz digging the pool.

Have a safe and happy 4th my friends.

Labels: a painting a day, animal, dog, Karin Jurick, oil, pomeranian, swimming pool
Newer Posts Older Posts Home
Subscribe to: Posts (Atom)
“It seems to me very important to the idea of true democracy - to my country - and to the world eventually - that all men and women stand equal under the sky...” - Georgia O’Keeffe