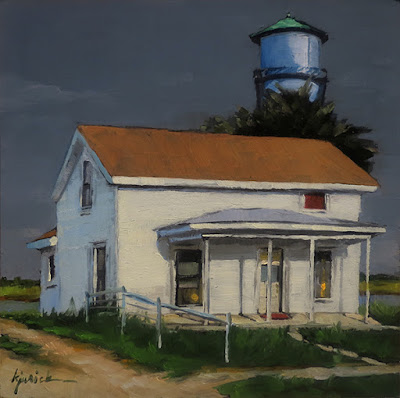 It is an afternoon of Zen painting a quiet, remote house.  Find peace whenever you can right?

Early evening outside of Sterling, Colorado.

"All Walks of Life" 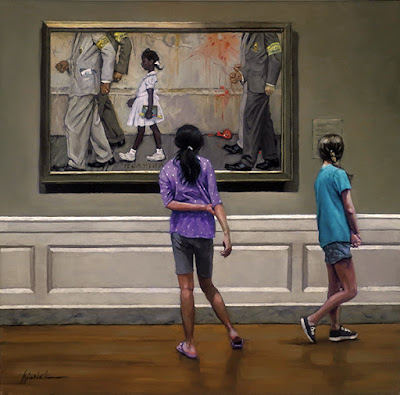 Today, I thought you might appreciate knowing about an American hero, Ruby Bridges and why she mattered in our country's history almost 60 years ago.

Norman Rockwell's iconic painting The Problem We All Live With was completed in 1964 for Look Magazine - his first illustration for the publication after ending a 47-year association with The Saturday Evening Post.  He worked with Look Magazine for 10 years, illustrating some of his deepest concerns about civil rights, poverty in America and the exploration of space.

In 1960, Ruby Bridges was six and became the first African American student to integrate an elementary school in New Orleans after a bitter year of resistance by the Louisiana school board.  What it took was a federal court ordering the state to desegregate and despite Louisiana's efforts to create entrance exams for African American students in order to enter any all-white school, Ruby was one of five who passed the exam.

Ruby and her mother were escorted to school every day by four federal marshals for the entire school year. Undeterred and dignified, she walked past crowds screaming vicious slurs at her. Parents withdrew their kids from school and only one teacher, a white woman from Boston, was willing to accept Ruby in her class of one.  She ate lunch by herself and never missed a day of school that year.

The Bridges family suffered for their daughter's courage - the grandparents were evicted from the farm where they had lived for 25 years, her father lost his job and grocery stores refused to sell to her mother.  Ruby graduated from a desegregated high school, married and had four children, became a life-long activist for racial equality and established a foundation to promote tolerance and change through education.  In 2000, she was made an honorary deputy marshal in a ceremony in Washington DC.

The painting The Problem We All Live With has traveled around the world, resided at the White House during President Obama's terms and can be viewed in the Norman Rockwell Museum in Stockbridge, Massachusetts. 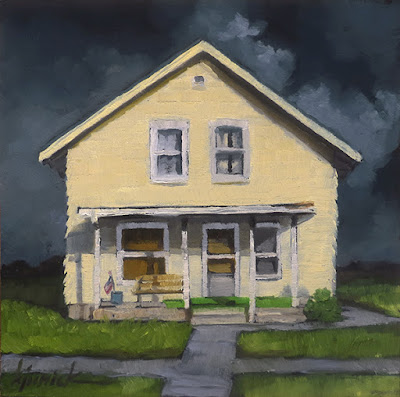 Took a breather from a larger painting to do a little house, one of my favorite subjects.  I spotted this little homestead outside of Sterling, Colorado on a road trip - with ominous skies looming in the distance.

It pretty much expresses how I feel these days. 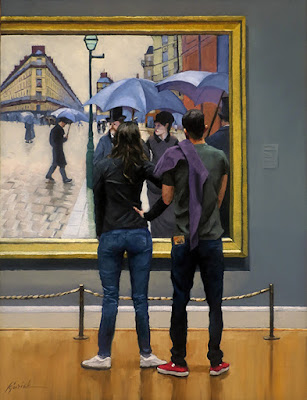 Back in 1977, I was 16 years old and was taking Saturday classes on figure drawing at the school of the Art Institute of Chicago.  I lived in the burbs, took the train downtown to the city, walked about five blocks to class which was on the back side of the museum and when class was over, I walked into the museum and spent the rest of the afternoon sitting and sketching people looking at art.  After a couple of years doing that, the paintings were like old friends.  I knew a lot of them well.  Especially Paris Street; Rainy Day by Gustave Caillebotte.

The Art Institute bought it in 1964 for an undisclosed price.  Although the world had not yet recognized the Caillebotte's talent, the curator knew what she was looking at.  Most of Caillebotte's works are privately owned by his family, this painting is one of the few in public collections. So I always felt lucky to visit my friend.

"The Light of Day" 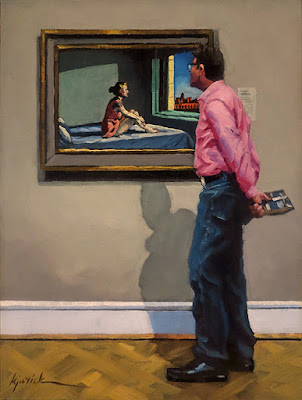 If you venture out much of what you'll see resembles an Edward Hopper painting.  Isolated streets, quiet neighborhood scenes.  No artist has portrayed isolation like Hopper.  Keep in mind, he lived in New York City.

Hopper once said about his paintings "What I wanted to do was to paint sunlight on the side of a house." and spent his lifetime pursuing light in his resonant paintings.  Morning Sun captures that beam of sunlight coming through the window, onto the woman on the bed - his wife, Jo, was often his model for his work.

What Morning Sun means to me, especially now in the midst of this pandemic, is even in isolation and darkness, look for the light.

Hopper's painting resides in the Columbus Museum of Art in Ohio and at one time traveled to the Art Institute of Chicago for a Hopper exhibition, which is where I had the pleasure of seeing it in person.

A shout-out to my good friend and fabulous painter Karen Hollingsworth - tonight was to be her solo-show opening at Principle Gallery in Charleston.

Doesn't mean you can't see her new paintings - they are all hung at the gallery and ready to for their new home.  Just go to Principle Gallery's page and look at these wonderful and uplifting pieces. 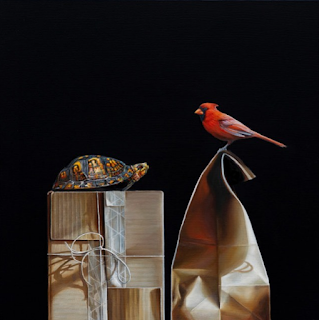 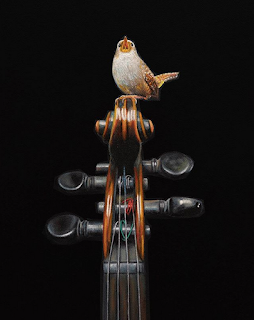 ~ Best to you Karen!

John Singer Sargent's El Jaleo has to be in the Top-50-Best works of American art in my humble opinion.  Its home is in the Isabella Stewart Gardner Museum in Boston, a museum that is in and of itself a work of art.   The painting is a massive 12' by 7' canvas, not including the frame.  It hangs in a darkened niche at the end of a long hallway.  As you approach it and step into this cramped, intimate space, you feel like the luckiest person on earth viewing this masterpiece in splendid solitude.

Sargent had a fascination with Spain, spending 5 months traveling thru Spain and North Africa in 1879.  He spent months completing El Jaleo, referring back to numerous sketches he made on his trip, paying special attention to the dancer's movements and the drapery of her dress.  The dancer moves from left to right, accompanied by musicians and dancers seated along the wall.

El Jaleo is Spanish for the lively solo dance with castanets.  When Sargent entered the painting in the Paris Salon in 1882, the full title was El Jaleo: Danse des Gitanes (Dance of the Gypsies).  Six years later, the wealthy art collector Isabella Stewart Gardner purchased it from another collector.

Labels: a painting a day, art museum, Boston, El Jaleo, figurative, Isabella Stewart Gardner Museum, John Singer Sargent, Karin Jurick, man, oil
Newer Posts Older Posts Home
Subscribe to: Posts (Atom)
“It seems to me very important to the idea of true democracy - to my country - and to the world eventually - that all men and women stand equal under the sky...” - Georgia O’Keeffe