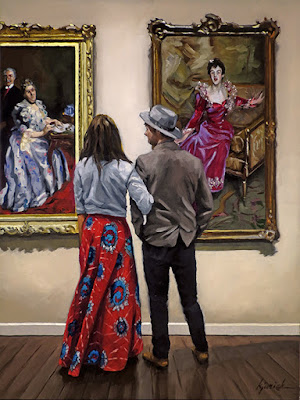 My new painting features a couple viewing two glamorous portraits in the Metropolitan Museum of Art in New York City.

On the right, quite possibly, is the most perfect painting John Singer Sargent ever produced (my humble opinion of course).  Mrs. Hammersley was the wife of a banker and known fashionista elegantly posed on a French sofa with her stunning, red silk-velvet dress taking your eyes down to the bottom left corner.  The edges of the fabric shimmer in lavender and rich reds.  Her netted, sparking collar is the sweet spot - tiny daubs of gold and white dance over it, making you want to touch it.  Mrs. Hammersley was included in an exhibit in London in 1893, ten years after Sargent's scandalous Madame X nearly ruined his reputation as a portrait painter.  Mrs. Hammersley received raving reviews and essentially restored the artist's career as a painter of the wealthy.  After Mrs. Hammersley's death, her husband kept the portrait until he was forced to sell it because of financial difficulties - a common ending to the many once-wealthy clients of Sargent.

On the couple's left is Mr. and Mrs. Anson Phelps Stokes by Cecilia Beaux, also an American painter.  The couple was painted in an unconventional way with the wife more prominent in the foreground and her husband behind her.  Anson Stokes was an extremely wealthy man - a merchant, real estate developer, a banker, a silver mining tycoon, a warship designer and avid yachtsman (he owned 4 yachts), and a house on Madison Avenue in New York City. The couple left the city and moved to Staten Island when (gasp!) non-millionaires moved in.  His wife, Helen Louisa Phelps, yes Phelps, were both related, descendants from George Phelps, who came to America in the early 1600's.  They had nine children, the oldest wrote for the New York Times and died in 1970.

When Anson died in 1913, it was reported he was worth around $620 million dollars.  After his estate was settled, it was determined he was actually worth about $19 million. 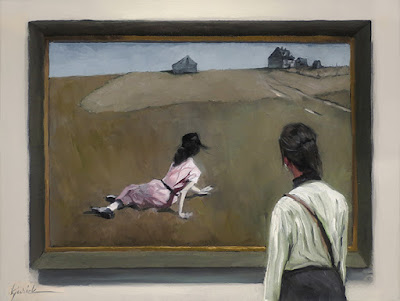 Today I just chose to feature one of my personal favorite paintings, by Andrew Wyeth, Christina's World.  It is moving. It represents human dignity.  In a word, it is perfect. 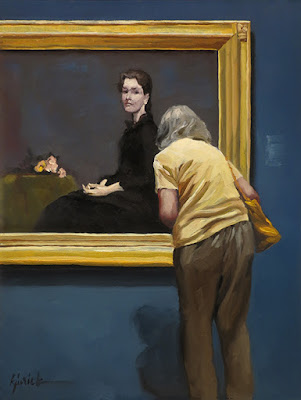 I've been to the Crystal Bridges Museum of American Art twice.  Both times, I stop at this portrait of Anne Page, by Dennis Miller Bunker, and soak it in longer than most paintings at the museum.  It's restrained, low in key, fairly neutral in color - no frills, just elegant.

Dennis Bunker is an artist you don't hear too much about.  He was born in New York City in 1861, an innovator of American Impressionism, hung out with some of the most famous painters of that time - John Singer Sargent, Wilmer Dewing, William Merritt Chase to name a few.  His circle of friends was crucial as an artist but none as beneficial as Isabella Stewart Gardner, a valuable patron of artists.  There is the Isabella Stewart Gardner Museum in Boston, established in 1903, which owns some of the most outstanding works of art in this country.

A friend of Bunker's set up a date with Anne Page and the artist, thinking they'd make a good couple.  Bunker was smitten from the first encounter, wrote to his friend "She seems to have the same charm that some of your other friends have. I mean your female friends. I am quite at a loss when I try to define it and I begin to think it a bit out of my line. I don’t know that I am entirely comfortable in the presence of such natures, they seem too fine for me.”

Bunker wrote Anne poems and long letters and eventually had her sit for the portrait you see above.  Although the two never formed a romantic relationship, they remained friends throughout his short life.  Bunker fell ill, just two months after he married, and died of meningitis at the age of 29. 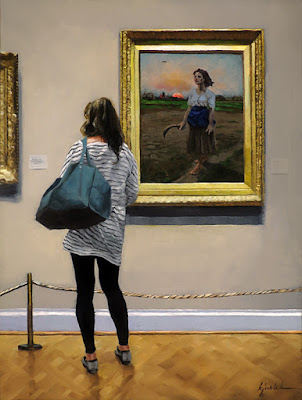 On this soul-sucking day,  I thought of one of my favorite paintings Automaton by Jamie Wyeth.  The definition of automaton is an android or robot, but also refers to a person who seems to act in a mechanical, unemotional way.

The Wyeth family celebrated Halloween with great enthusiasm every fall.  Beginning with the patriarch, N.C. Wyeth who had a large stash of costumes with swords and pirate hats and spooky masks for his illustrations - and his children relished the chance to dress up and pretend they were the buccaneers or ghouls taking over the family farm.  I wrote up a post about the Wyeth's love of Halloween here, back in October 2015. 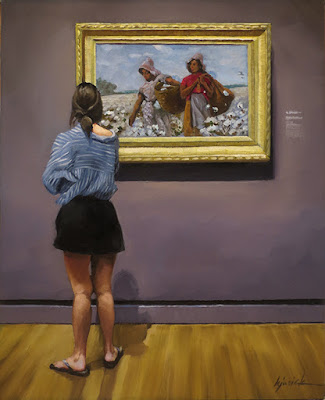 The painting featured here, The Cotton Pickers, being viewed by a woman in the Crystal Bridges Museum of American Art, is a historically important one painted by Winslow Homer in 1876 - a time in American when the Civil War had ended a decade earlier and the period of Reconstruction was nearly at an end.  Reconstruction attempted to end the Confederate nationalism and end slavery and give newly-freed slaves their civil rights and equality guaranteed by three new Constitutional amendments.

Winslow Homer was born in Boston in 1836, and at the age of 19 he apprenticed at a newspaper, then as a freelance illustrator and lithographer for nearly twenty years - tapping into a hot art market for urban and country social scenes (think Currier & Ives).

In 1861, Harper's Weekly hired Homer to illustrate Lincoln's first inaugural address then stayed on with the magazine, as a battlefield artist, when the Civil War began a year later.  In 1874, Homer returned to Virginia, where he had spent time during the final siege of the war, and took a new direction in his subject matter, wanting to portray the lives of rural, black Americans - mindfully in contrast to the caricatured portraits he and other war correspondents took part in.

That's where the importance of The Cotton Pickers came in - painting blacks in more heroic terms. Not the denigrating ways of the past. European artists nailed this representing their nation's peasants and field workers and Homer brought the same respect to our nation's black population. The two women stand in a cotton field, still laboring as they did before the Civil War, aspiring for a better life despite the Jim Crow laws preventing them from true equality. It's a very poignant and profound painting.

Labels: a painting a day, African-American, art museum, Crystal Bridges Museum of American Art, figurative, Karin Jurick, oil, Winslow Homer, women
Newer Posts Older Posts Home
Subscribe to: Posts (Atom)
“It seems to me very important to the idea of true democracy - to my country - and to the world eventually - that all men and women stand equal under the sky...” - Georgia O’Keeffe