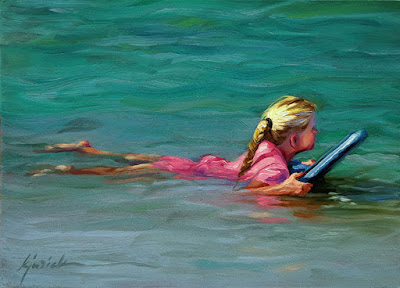 A girl and her boogie board in the ocean in Miami Beach, Florida.

I decided to paint a serene landscape today, 1 - because I haven't painted a landscape in some time and 2 - it's a mellow Sunday and 3 - because I rocked out to the 30th Anniversary for Bob Dylan all afternoon while I painted.

A panoramic view from the coast on Rock Harbor, Cape Cod. 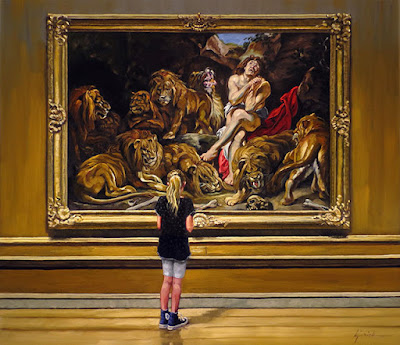 Sir Peter Paul Rubens, born in 1577, was a Flemish Baroque painter known for his altarpieces, portraits of royalty, landscapes and history paintings of symbolic and mythological subjects - bringing me to Daniel in the Lion's Den, which he painted at the age of 37.

The story in the Old Testament, in the Book of Daniel, tells how Daniel is promoted to high office by Darius the Mede (King of Babylon), but his rivals trick the king into condemning Daniel to death.  Darius casts him into the lion's pit, crossing his fingers that he'll survive, visits him the next morning asking if God has saved him.  Daniel replies 'God sent an angel to close the jaws of the lions because I was found blameless before him'.  The king then rounds up the back-stabbers and their wives and children and tosses them into the lions' pit and commands 'all the people of the whole world to tremble and fear before the God of Daniel'.  It all may be fiction or folktales, but yikes, that's harsh.

The scene was depicted by several notable artists including Henry Ossawa Tanner and Jan Brueghel the Younger and is included in music thru the years - example, in Fiddler on the Roof, the song Miracle of Miracles - 'Wonder of wonders, miracle of miracles, God took a Daniel once again, turned him around and miracles of miracles, walked him through the lion's den.'

I worked hard on this new painting, using my little brush for a change with respect to the details of Rubens' attention to the lions' hair and Daniel's exaggerated pose.  This painting will be included in the upcoming group show Lions + Tigers + Bears represented by Robert Lange Studios and held at the Vendue Hotel in Charleston, opening October 20th. 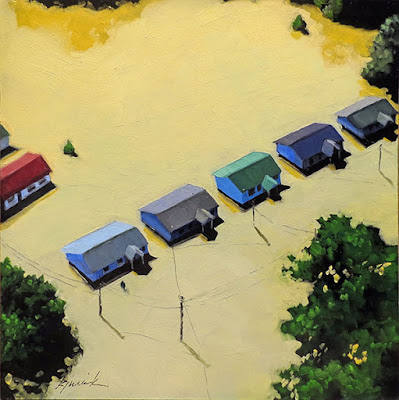 This was a study I did in the spring and decided to hang on to it - but this seems like the right time to offer it on auction to raise money. 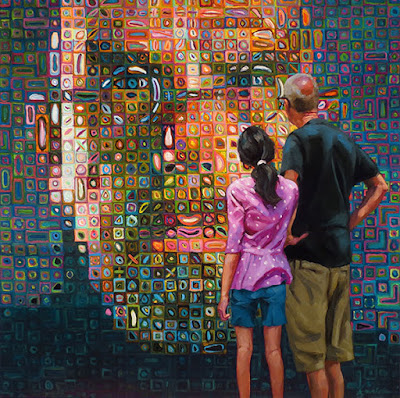 For me, discovering the artist, Chuck Close, was a revelation.   I was a teenager, already obsessed with drawing people.  And there I stood, staring at a gigantic canvas of a face, wondering how he did it.  Realizing that his technique was to grid the original photo and essentially blow it up on canvas was a huge learning experience for me.  Naturally, I started to grid every photo, album cover, magazine ad I could find and practice.  He's been a hero of mine ever since.

Close is a man to be admired not just for his extraordinary artistic abilities.   He is the son of artistic parents who supported his creative interests right from the start.  He suffers from dyslexia, struggled with schoolwork, couldn't play sports due to a neuromuscular condition but he did excel in art.  He lost his father at the age of 11, his mother fell ill with cancer and Close suffered health problems that kept him home and in bed for long periods of time.  At the age of 14, he saw an exhibition of Jackson Pollock, which made him want to become an artist.

He studied art during the abstract-crazed art world, chose to go in the completely opposite direction and developed his photorealism style.  Interesting enough, Close suffers from prosopagnosia, or face-blindness, not recognizing faces - which boggles the mind considering his ability to replicate details on faces to a tee.  His technique for applying color helped the development of the inkjet printer - bet you didn't know that.

By the 70's, Close's work was in the finest galleries all over the world and he was thought of as one of America's best contemporary artists.  At the age of 48, he suffered the sudden rupture of a spinal artery and was left almost entirely paralyzed and confined to a wheelchair.  After regaining the partial use of his arms, he pushed on, developing a studio to accommodate his wheelchair and with a brush taped to his wrist, he began painting a combination of abstract and looser pieces that I particularly love - like his self-portrait above, done in 2005.

He's a man with no excuses.  A man who never played the victim.  He's evolved with age, years and limitations.  He's a man to be admired.

My painting will be included in the October group show 12 x 12", held at Robert Lange Studios. 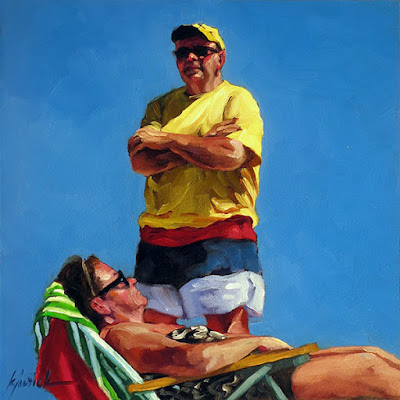 I just  L-u-r-v-e  how this painting turned out.

From the beach on Cape Cod, a man keeping watch over his sunbathing wife. 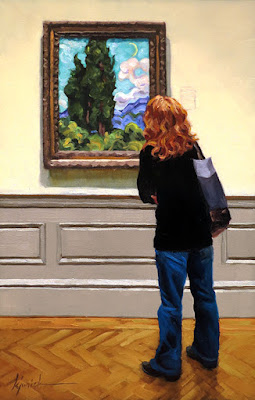 Most of you know bits and pieces of the life of Vincent van Gogh.  I promise you, if you've never seen a painting of his in person, you're really missing out on the splendor of brush strokes, the thick, rich colors swirling around the canvas, the movement, the passion that van Gogh had of the world around him.

Van Gogh was 36-years-old when he painted 'Cypresses' - during his year-long stay at the asylum in Saint-Remy and a year before his death.  It is a more close-up view of the the tall and massive trees he found 'beautiful as regards lines and proportions, like an Eyptian obelisk'. 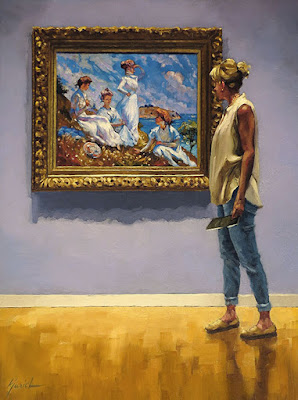 A couple of days ago, while I was working on this new painting, I stepped outside to stretch and looked up at the summer sky full of big, puffy clouds against the jewel-blue  -  the same summer sky that I was painting in Frank Benson's Summer.

I know Benson's painting so well.  In 33 years of framing, I'm guessing I framed the print 50+ times.  Women, especially, loved it.

Frank Weston Benson was a Massachusetts native born in 1862 - became the founding member of the Ten American Painters in his 30's, associating himself with famous impressionistic painters like William Merritt Chase, Thomas Dewing, Childe Hassam to name a few.  It was a desire to be a part of like-minded artists and turned out to be a brilliant marketing strategy - their exhibitions were wildly popular around the turn of the century.

Benson painted Summer in 1909, featuring his daughters and niece on the cliffs near his family's vacation home on North Haven Island in Maine.  He composed the women from sketches and photographs, creating the 'personifications of beauty and optimism on a perfect summer day'.

Benson taught at the School of the Museum of Fine Arts, Boston and occasionally taught at Rhode Island School of Design.  The painting was donated to the school's art museum by one of Benson's major patrons, where it hangs today. 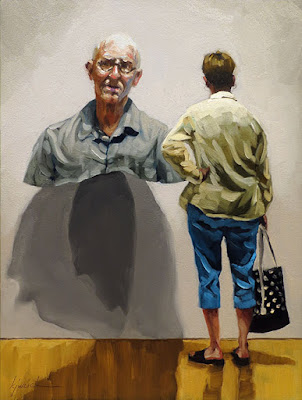 Since I was a teenager, I've been fascinated with realism - or in this case, hyper-realism.  Just the idea of how an artist executes the artwork boggles my mind.  You see paintings in museums that look like a photograph, so precise it's staggering.  I wanted to do that for years, until I realized I wasn't up to it.  I'm more interested, now, in realism with a looser style - although you'll notice some paintings lean tighter and some, like much of these smaller pieces I frequently auction, are more painterly.  It keeps me sane.

The hyper-realism sculpture I feature in this new painting is by Evan Penny titled 'Old Self: Portrait of the Artist as He Will (Not) Be'.  Not only is this work of art insanely precise, down to every wrinkle and whisker and fold, the cast of shadows under the strong lighting is so very cool - not to mention the reactions of the museum patrons.  Evan Penny has a great website and on the Crystal Bridges Museum's website, you can read 'A Conversation With Evan Penny' that will give you insight of the artist's thoughts.

Labels: a painting a day, art museum, Crystal Bridges Museum of American Art, Evan Penny, figurative, Karin Jurick, man, oil, portrait, sculpture, woman
Newer Posts Older Posts Home
Subscribe to: Posts (Atom)
“It seems to me very important to the idea of true democracy - to my country - and to the world eventually - that all men and women stand equal under the sky...” - Georgia O’Keeffe