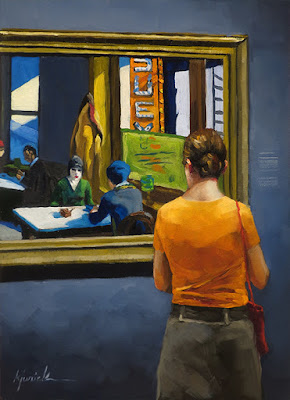 I'm planning out an upcoming solo show that will feature the ladies of the art world.  Not so much the artists but the portrayals of women through the ages.  One that first came to mind on my now-long list of possibilities was Edward Hopper's Chop Suey - which, by the way, just broke a record in a Christie's art auction.  Painted in 1929, Chop Suey became the most expensive work of pre-war American art, selling for nearly $92 million.

Chop Suey is quintessential Hopper for a couple of reasons.  Hopper loved the spaces of restaurants, not so much the food - hence, the empty table except for the teapot.  Hopper was famously uninterested in food and known to eat his meals right out of a can.  Chop Suey restaurants were the rage in the 1920's, mostly frequented by young, working-class women dining together.  Another usual subject matter of Hopper's.  He and his wife went to this particular restaurant often, The Far East Tea Garden, once located in the Upper West side of Manhattan, no longer there.  Hopper's wife posed for all three of the women figures in the painting, also a usual habit.

Your Moment of Zen 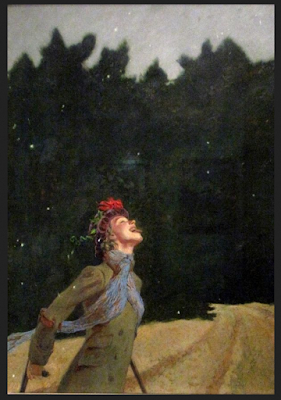 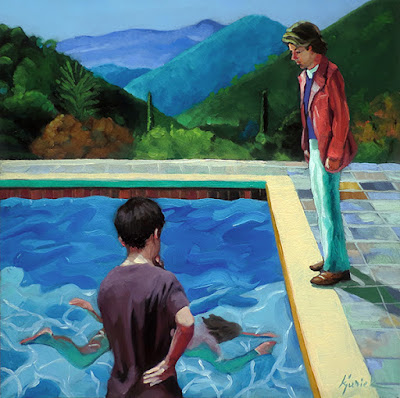 My new painting, a study for a larger piece, was both a blast and challenging.  David Hockney's Portrait of an Artist (Pool with Two Figures) is vivid and patterned and awe-inspiring.  I am thrilled for David Hockney, who is still alive and well and producing fabulous paintings - at a recent Christie's auction, his painting started with no reserve at $15 million and fetched $90.3 in the end.  So deserved for its recognition and worth.

Hockney is known for his brilliant pool paintings of course.  This was inspired by two photographs next to each other on his studio floor.  A double portrait.  Hockney worked on it for about a year - looking at a due date of just four weeks until he had to ship it off to New York for an exhibition.  That lead to working 18 hours a day for two weeks just to get it done.

Labels: a painting a day, art auction, David Hockney, figurative, Karin Jurick, man, oil, swimming pool
Newer Posts Older Posts Home
Subscribe to: Posts (Atom)
“It seems to me very important to the idea of true democracy - to my country - and to the world eventually - that all men and women stand equal under the sky...” - Georgia O’Keeffe