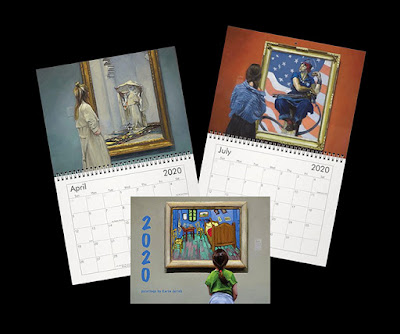 "The Man in Black" 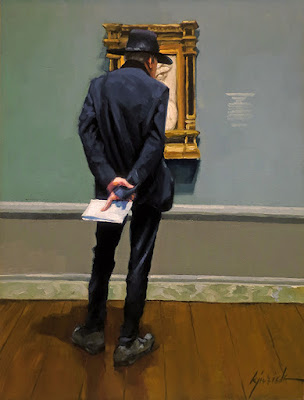 When I was in high school some 40 years ago, I was obsessed with figure drawing.  I'd cut school, take the train to downtown Chicago, with sketchbooks and pens in hand, and spend mornings in the Amtrak lounge in Union Station then afternoons at the Art Institute of Chicago.  I drew hundreds of people sitting, eating, standing or lounging until I had to head back home.

So if anyone wonders where this subject matter of painting people looking at art - I started it years ago.  And sometimes, like with this new painting, it's all about the people.  I credit my mom, an artist herself, with the great pastime, people watching.

This gentleman caught my eye immediately.  His tall, slender figure was striking.  Especially clad in all black and topped with his handsome felt hat.  I live for figures like his.

Although minor here, the artwork the man in black is viewing is a relief sculpture of Alexander the Great, done in 1485 by the artist Andrea del Verrocchio, in the National Gallery of Art in DC. 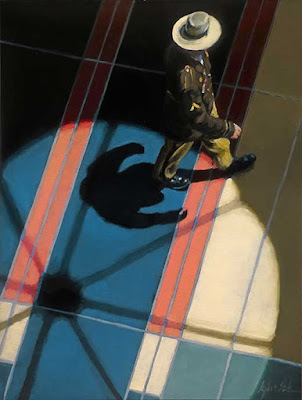 This image is one I've wanted to paint for a long time and getting my feet wet with my recently-painted Envoy,  I took what I learned and went ahead with it.

A view from above, in the Reagan National Airport, a gentleman of authority walks thru the sunlit floor. 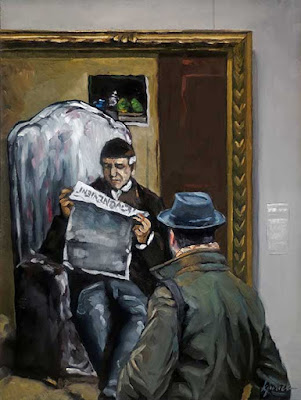 Since I've been back to painting, my last three - a museum scene, shadows on a tiled floor and this fish - all have something in common.  They've all required intense concentration.  Intentionally to get me focused again.  That helps me get back to work.

Brett cleaned up and sharpened my palette knives for this new piece.  Palette knife painting is freakin' hard.  It takes the ultimate self-control.  It kinda drives me nuts, but practicing is a good thing.  A fish has texture and I thought this subject would be perfect for this exercise.  And frankly, second to dogs, I love painting fish. 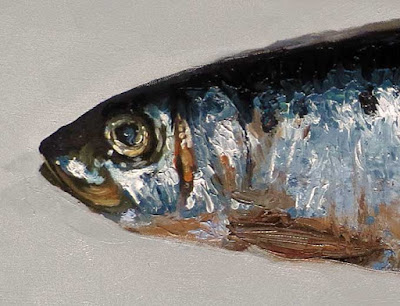 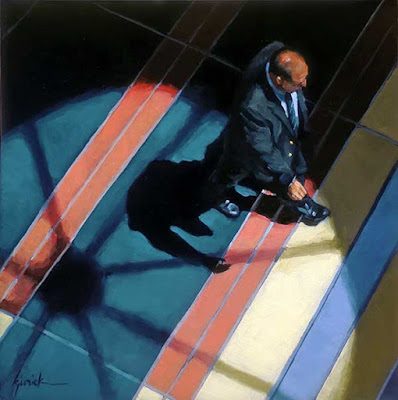 "All in the Family" 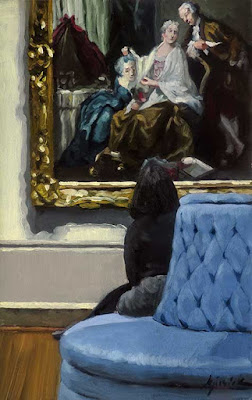 Lucky me, I got to visit the National Gallery of Art in DC last weekend - the same weekend the Washington Nationals and the Houston Astros were in town for the World Series.  At a minimum of $1,000 a ticket, I could only opt for an afternoon at a free art museum but hey, it was great being there again.

If you breeze through the galleries, sometimes you'll miss out on the fun facts of a painting - like Francois-Hubert Drouais's Family Portrait, notably dated April 1, 1756.  You may guess it's Christmas Day because of the gifts and decorations in the scene but no, it was April Fool's Day as we know it now.  Before the Gregorian calendar was adopted in 1582, the medieval calendar marked New Year's Day as March 25th, the vernal equinox - and the 1st of April marked the beginning of spring.  Many people would, and still do, celebrate by exchanging springtime gifts on that day - this informal family portrait showing the little girl giving flowers to her mother, the husband reading a poem to his wife as she points to the daughter as a symbolic gift to her husband. Very sweet.

Labels: a painting a day, art museum, figurative, French art, girl, Karin Jurick, man, National Gallery of Art, oil, Washington DC, woman
Newer Posts Older Posts Home
Subscribe to: Posts (Atom)
“It seems to me very important to the idea of true democracy - to my country - and to the world eventually - that all men and women stand equal under the sky...” - Georgia O’Keeffe