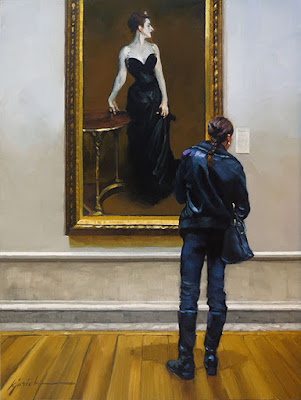 I have such a deep admiration for John Singer Sargent's paintings - in person, they are so very awesome, so elegant - whether the subject is a man or woman of privilege or sidewalk scenes in Spain - they are a thing of masterful beauty.  When I paint one of his pieces in my composition,  I find myself painting slow and attentive, always learning more and more from Sargent.

From the Metropolitan Museum of Art in New York City, a young woman stands before Sargent's stunning 'Madame X'. 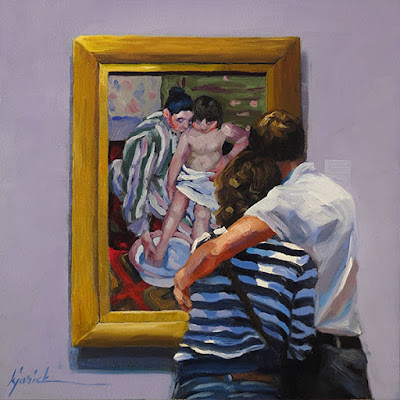 It's high time I featured a woman artist - the very recognizable Mary Cassatt.

Cassatt was American, born in Pennsylvania in the mid-1800's, in a well-to-do banking family.  She was one of seven children who were raised with high education, traveling and living in Europe for an extended period, all the while learning French, art and music.  She was around 11 years old when she first saw the great French artists like Corot and Ingres among others.

Her family objected to her becoming a professional artist - regardless, she began studying art and painting at the Pennsylvania Academy of Fine Arts in Philly - being one of the few women students in a male dominant environment.  It wasn't easy for women at that time to be taken seriously so she moved to Paris at the age of 22, with her mother, and began more formative studies.

She returned to Pennsylvania for a while, tried to capture attention in several galleries, but was discouraged over and over until the Archbishop of Pittsburgh commissioned her to paint copies of the Italian artist, Correggio, and all expenses paid to travel back to Europe - which she happily accepted.

Cassatt continued her stay in Europe - suffered the same setbacks a woman had to deal with until her big break when Edgar Degas invited her to show her works with a group who called themselves The Impressionists.  For years, she blossomed as an artist and relished their cause and notoriety.

I find the most interesting part of her life was in her later years,  at around 66 years old, Cassatt traveled to Egypt, followed by a crisis of creativity (haven't we all felt that at one time) - so impressed with 'the strength of this Art' that it almost defeated her.  She suffered from cataracts, crippling arthritis and diabetes but kept on painting but was forced to stop painting at the age of 70, as she was almost blind.  She then took up the cause of women's suffrage, contributing to the movement by showing and selling her paintings.

Cassatt is best known for her depictions of women's daily lives and their closeness to their children - as seen in 'The Child's Bath' (featured in my painting) which hangs in the Art Institute of Chicago.

"A Peek In The Bedroom" 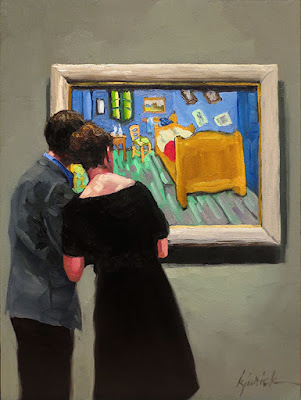 Two things inspired me to paint this on Valentine's Day.   The couple, of course, enjoying time together and this article in the Chicago Tribune about Vincent van Gogh's famous painting 'The Bedroom', which hangs in the Art Institute. 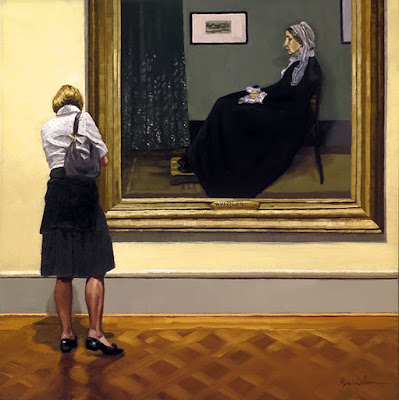 I've been painting my larger pieces so slow and carefully, more tight and detailed - it may be a phase.  When I'm painting another's painting - like Klimt's masterpieces, or Whistler's portrait of his mother, I get totally into the details I've never noticed before.  Subsequently the rest of my painting takes on the same tightness.

The smaller pieces I generally auction on eBay are try-outs for something I have in my brain - and sometimes it leads to a larger, more realized piece like this one.  After I finished my smaller one I couldn't wait to delve into a larger format of Whistler's iconic 'Arrangement in Grey and Black, No. 1', better known as 'Whistler's Mother'. The marriage of grey/golds with blue/greys and green/greys is alluring.  And I love using up all my Torrit Greys.

For those who don't know what Torrit Grey is - the brand Gamblin will recycle pigment dust from every color in the spectrum and mix up a unique color every year.  In fact, they give the tubes away with a purchase of their paint while supplies last.  I still have about 11 tubes from the past 11 years.  They are priceless. 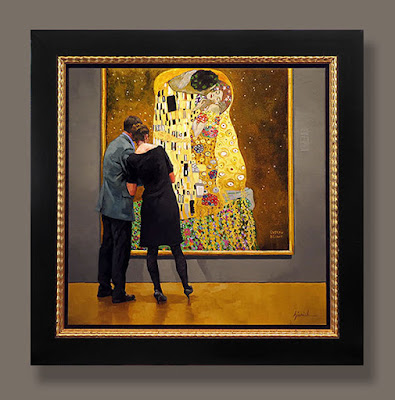 
I don't usually show you my paintings framed but I thought this was so gorgeous, I'd show it before I shipped it off to The Red Piano Art Gallery.  Should be hanging on their wall just in time for Valentine's Day this Saturday.

This piece 'Double Date' and 'Formal Wear' - allow me to refresh your memory.... 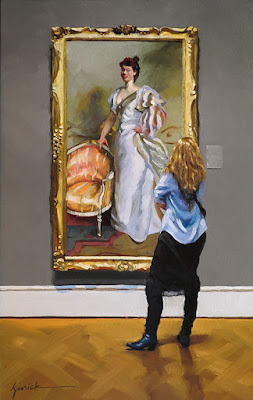 
will be included in the Hilton Head Art Auction taking place February 27th at The Red Piano Art Gallery.

You can find the details and contact information on my webpages for each painting - here for 'Double Date' - and here for 'Formal Wear'. 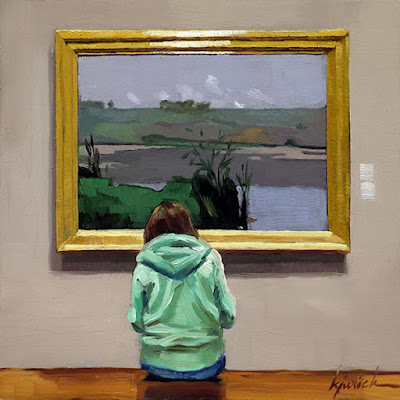 A couple of weeks back, I was refreshing my memory about William Merritt Chase (for this post) and came across 'The Ten' - a revered group of artists that included Chase.  I jotted down several names that I was familiar with and love their work, one of which is John Henry Twachtman.

I always stop in my tracks when I come across Twachtman's paintings, very much like another member of The Ten, Willard Metcalf - they both painted landscapes that are so calming, so still, so very Zen.  I especially love their snow scenes.  They painted loose, painterly, seemingly quick - most likely they were outdoors painting plein-air.

In the Metropolitan Museum of Art, New York, Twachtman's 'Arques-la-Bataille' hangs in front of a bench for all the right reasons.  The scene is calm, the color palette is soothing and low-key - a good painting to get lost in.

Twachtman was an American artist, from Cincinnati - traveled and studied abroad with fellow artists and discovered like-minded painters who took on the Impressionistic style of the times, which was in the mid-to-end of the 1800's.

It's also my moment of Zen to paint these images - taking rich greens and blues and lavenders and greying them down a notch.  It made for a mellow day of painting. 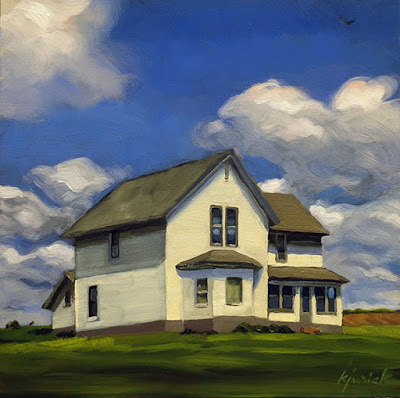 An ode to the beauty of a simple, stately farmhouse in Middle America, Iowa.

Labels: a painting a day, farm, home, house, Iowa, Karin Jurick, landscape, oil
Newer Posts Older Posts Home
Subscribe to: Posts (Atom)
“It seems to me very important to the idea of true democracy - to my country - and to the world eventually - that all men and women stand equal under the sky...” - Georgia O’Keeffe