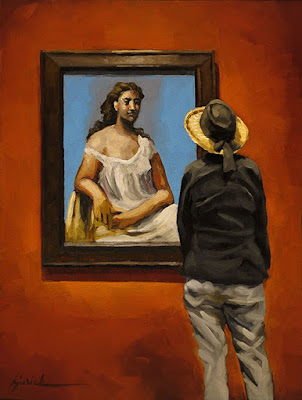 I don't like all Picasso's works of art, but I like this one, Seated Woman in Chemise, especially placed on the warm,  red wall in Crystal Bridges Museum of American Art.   The casual, natural feel of the model with the blue background appeals to me.  The painting is currently on loan from the Tate Museum in London. 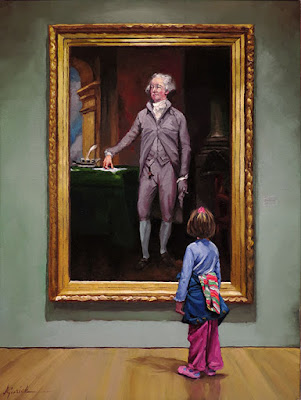 In the Crystal Bridges Museum of American Art, people flock to John Trumball's iconic Portrait of Alexandar Hamilton.  Children pull their parents over to see him.  The broadway play must take credit for most of the enthusiasm of Hamilton.

The artist, John Trumbull had just as an interesting, historically important life as Hamilton - born in Lebanon, Connecticut in 1756, the son of Jonathan Trumbull, a colonial Royal Governor who embraced the partriot cause and Faith Robinson, a descendant of Pilgrim leader John Robinson.

Trumball entered Harvard at age 15, with the parents' wishes for him to be a lawyer or minister and he immediately became friends with John Singleton Copley, the leading portrait painter of the Colonies and began studying painting to the chagrin of his father.

When the Revolution fired up, Trumbull joined the Connecticut Regiment, witnessed the Battle of Bunker Hill, which later was a subject of one of his historical paintings - caught the attention of General George Washington, and served until 1777.  Determined to study painting in England, he delivered a letter of recommendation from Benjamin Franklin to study with the Official Painter of Historical Subjects to George III.  Not too shabby.  There he met a student, another famous portraitist, Gilbert Stuart.  All was going well until his arrest and incarceration for allegedly being a British spy until several known artists convinced the king to set him free and leave London.

If you've been to the U.S. Capitol, you saw several historical paintings by Trumbull, notably The Declaration of Independence, a commission urged on by Thomas Jefferson and John Adams.   The man lived a Forrest Gumpesque life through his adult life, meeting the right people at the right time.  He died in 1843, interred on the Yale Campus under the building which contained many of Trumbull's important works of art.  The inscription over his tomb includes the words 'To his Country he gave his SWORD and his PENCIL.'

A Show for Karen Hollingsworth


Karen Hollingsworth, my good friend and exceptional artist will be attending her solo show's opening night tonight at Principle Gallery in Charleston SC - go if you can.  There's plenty to delight you. 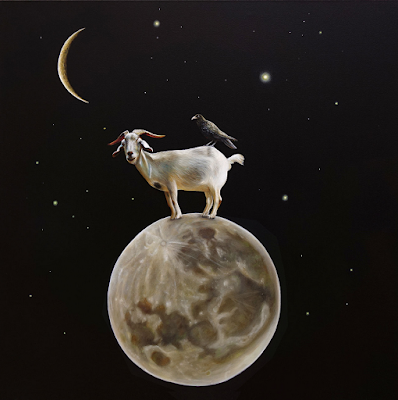 Also opening, right down the street from Principle Gallery - at the Vendue Hotel - the group show Homage.  My painting is a homage to Edward Hopper's Early Sunday Morning and Summertime.

Click here to see the paintings and photographs included in this show.

For a larger view of Early Saturday Morning  click here. 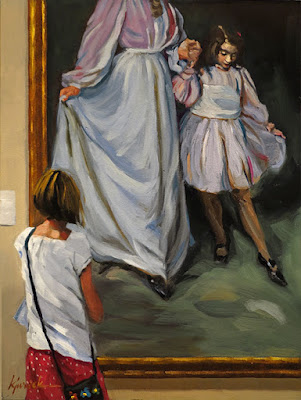 Labels: a painting a day, Art Institute of Chicago, art museum, Cecilia Beaux, figurative, girl, Karin Jurick, oil, portrait, sisters, woman
Newer Posts Older Posts Home
Subscribe to: Posts (Atom)
“It seems to me very important to the idea of true democracy - to my country - and to the world eventually - that all men and women stand equal under the sky...” - Georgia O’Keeffe