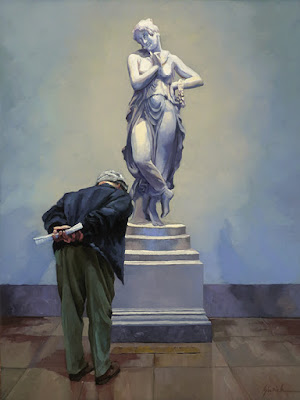 It's always nice to see a woman placed on a pedestal.

The marble sculpture Dancer with Finger on Chin was completed by the Italian sculptor Antonio Canova in the final years of his life, around 1822.  One of his most recognizable pieces is Psyche Revived by Cupid's Kiss, housed in the Louvre in Paris.  We are lucky to have the one featured above in our National Gallery of Art in DC.

Canova displayed his talent for sculpture at a young age, by 27, he established his own studio producing works for Venetian nobility.  He went on to Rome, taking advantage of the popularity of the neoclassic style and becoming quite successful.  He received important commissions from the popes, Napoleon and many English aristocracy.

Next time you find yourself in the West Building of the National Gallery of Art, stop and admire this woman on her pedestal. 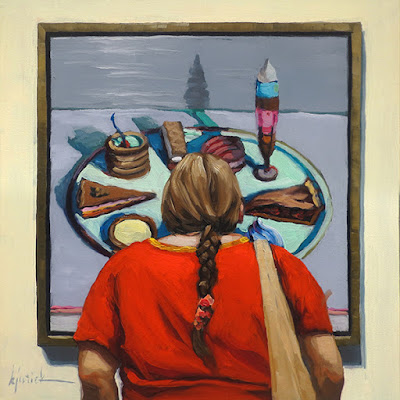 I was in the De Young Museum in San Francisco and a boy shrieked when he saw the painting of Superman by Mel Ramos - hardly able to contain himself.  When I saw, in person, Wayne Thiebaud's painting Dessert Tray in the Museum of Modern Art in New York City,  I didn't shriek but I felt the same excitement.  I l-u-r-v-e this painting.  I love every painting Wayne Thiebaud has done.

And it must be said, it was a total joy doing this new painting. 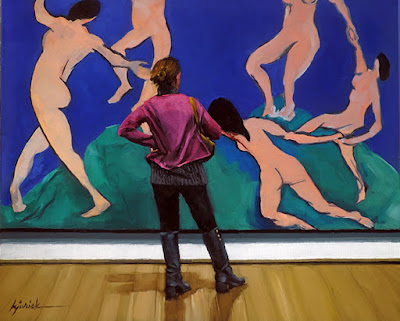 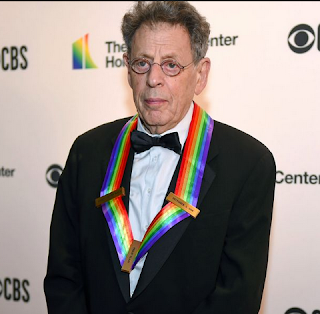 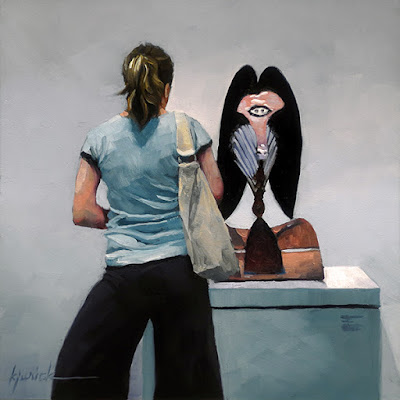 In 1963, the great Pablo Picasso was commissioned to create a public art sculpture by the architects of the Richard J. Daley Center in the loop in Chicago.  Picasso completed a maquette, or a small-scale version, featured in my new painting.  The cost of the 50-foot sculpture was $351,959 (equivalent to $2.7 million in present day) - paid for thru foundations and gifted from the artist himself to the city of Chicago.  The maquette resides in the Art Institute of Chicago, also gifted by Picasso.

The Chicago Picasso, known as The Picasso, was dedicated in 1967 by the Mayor Richard Daley ... 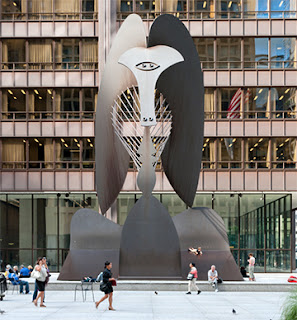 ... and met with mixed reactions.  The famed journalist Mike Royko ripped it to shreds in his newspaper column, saying "The fact is, it has a long stupid face and looks like some giant insect that is about to eat a smaller, weaker insect.  Its eyes are like the eyes of every slum owner who made a buck off the small and weak.  And of every building inspector who took a wad from a slum owner to make it all possible."  Quintessential Mike Royko.

Mayor Daley responded, at the dedication, saying "We dedicate this celebrated work this morning with the belief that what is strange to us today will be familiar tomorrow."

And it is familiar to anyone who lives in Chicago or has visited - or has watched Ferris Bueller's Day Off or The Blues Brothers.  It's a well-known "meet me at the Picasso" spot, enjoyed by the public with a farmer's market surrounding it in the plaza and many seasonal affairs.  So there Mike Royko. 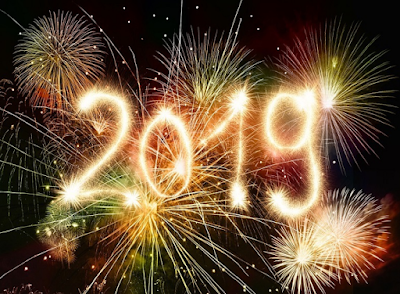 ~ Wishing you a happy and healthy year ~