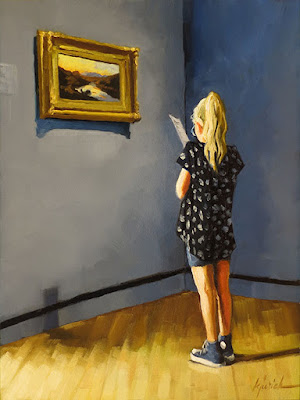 On my recent trip to the Crystal Bridges Museum of American Art, I spotted this young lady - she really impressed me with her genuine interest in the art.  I suspect she was taking personal notes of the pieces she really liked.

The painting she is studying is 'Landscape' by Robert Seldon Duncanson.  The artist, at 20 years of age, decided he'd rather paint canvases than houses, which he'd been doing up until then.  He was largely self-taught, had a long career as an artist until his death at age 51.

Shortly after the Civil War broke out, Duncanson exiled to Canada,  seeking out a place where racism would not get in the way of his profession as an artist.  There he studied the landscape paintings of Canadian artists, moved to the UK and toured with his artworks - he was well received and the prestigious London Art Journal declared him a master of landscape painting.

Duncanson's 'Landscape' depicts, very small, loggers floating rafts of timber down the Saint Lawrence River near Montreal with the glow of the sunset, a signature subject of the artist's, of a mundane workday activity in a beautiful setting.