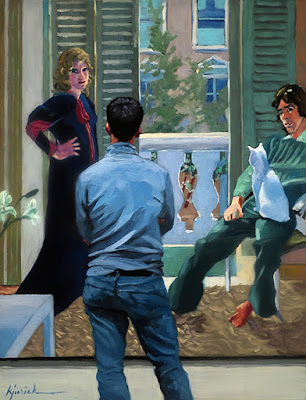 6 x 8"
oil on panel
sold
This study was a test for me - wanting to take on a larger painting with David Hockney's Mr. and Mrs. Clark and Percy.  As simplistic as Hockney's composition is, it's the reproduction that just ain't as easy as I thought.  But I've always been intrigued with his painting.
The two were Hockney's friends in London - Ossie Clark, a dress designer and Celia Birtwell, a fabric designer.  Hockney portrayed couples in several very large paintings.  The difference here is notably the two are looking at the viewer, other paintings have at least one looking off to the side.  He painted them in their flat in Notting Hill Gate, in their bedroom where the light was favorable to Hockney.  The tough part, the artist said, was the couple was against the light which darkens the figures indoors.  He did many studies and experiments to get the composition, the lighting and the couple's expressions right - going against the standard portrait of a couple where the woman is seated and the man stands next to her.
Percy was one of the Clarks' cats who symbolizes a libertine and somebody who disregards rules and does what he pleases. Sounds right.  The vase of lilies to the left of Celia are a symbol of the Annunciation and feminine purity.
Hockney was best man at the Clarks' wedding.  The space between them in his painting is said to be prophetic - the marriage didn't last.