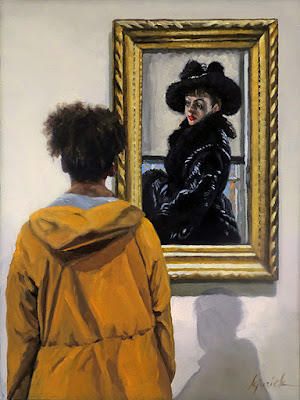 6 x 8"
oil on panel
sold
The artist Jacques (James) Tissot had an eye for beauty and fashion, the son of parents in the fashion and designer hats business.  At a young age, he'd paint clothing in fine detail, a style surely influenced by what surrounded him.  He also knew at a very young age he wanted to pursue a career in art.
Allow me to tell you about the woman in Tissot's painting Mavourneen (Portrait of Kathleen Newton) - raised in England and Agra, India - her father rose from an Irish army officer to chief accountant for the East India Company, and worth mentioning, a strict Catholic.  When she was 16, her father arranged for her to marry a surgeon in the Indian Civil Service - she embarks on a trip to her wedding on a ship, where the Captain became obsessed with her and gets his way once they arrived.  She married the surgeon, hadn't consummated the marriage yet - felt guilty - went to a Catholic priest for advice - he told her to fess up to her new husband - he was enraged - filed for divorce - ship Captain said he'd pay for her trip back to England but if, and only if, she was to be his mistress.  She gets pregnant, refused to marry the Captain and ran off to live with her sister.
That's where James Tissot comes in.  They meet, he falls madly in love with her - she gives birth to another child said to be his - they live together in domestic bliss for a few years until she contracted tuberculosis.  Tissot suffered through her illness, she couldn't bear it all and overdosed on laudanum and died.  Tissot was so distraught, he laid next to her coffin for four days.  A true Greek tragedy.