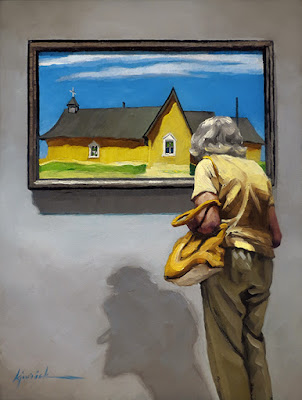 I was lucky to have seen an exhibit last year - at the Crystal Bridges Museum of American Art - featuring many of Georgia O'Keeffe's works.  Yes, several close-up flowers that are so familiar were there to please the masses but I'm more enamored with her buildings in New Mexico and New York City, including Cebolla Church.

O'Keeffe lived in the same county in New Mexico and often passed through the small village of Cebolla.  Her painting is of the Church of Santo Nino, a stark, simplistic adobe building - but with a pitched roof unlike the typical flat-roofed adobe structures mainly because Cebolla gets more snow in the winter than the lower areas of the state.