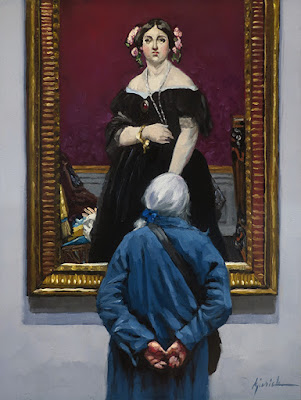 The first thing Brett said when he saw this finished painting was "they have the same slumped shoulders".  I didn't even notice that until he said so.  As if the portrait was of a distant relative of the woman viewing her, hence the title.

A little background of the woman in the painting, Madame Moitessier.  Marie-Clotilde-Ines de Foucauld, at the age of 21, married a super-rich banker and lace merchant twice her age.  Life was comfortable for the couple in French high-society and soon Marie began looking for an artist to paint her and her daughter's formal portrait.

Ingres was approached by an artist friend who passed on Madame Moitessier's request for a portrait and he was so smitten with her "terrible and beautiful head", he eagerly accepted the commission.  Portrait of Madame Moitessier was one of two paintings Jean-Auguste-Dominique Ingres did of the French woman - one seated and this one standing.  Why is Marie's daughter is not in the portrait?  Ingres found her "impossible" and eliminated her from the composition.

The Portrait of Madame Moitessier hangs in the National Gallery of Art in Washington, DC.