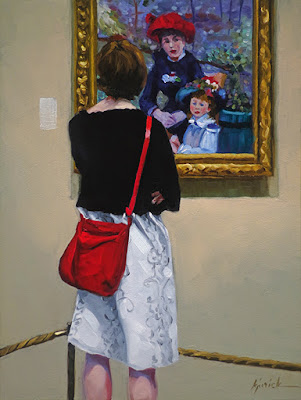 This new painting is a smaller study of one I'm thinking of doing larger.  I wanted to test out the woman's skirt.  I like her skirt.

She stands in front of a crowd-pleasure in the Art Institute of Chicago - Pierre-Auguste Renoir's Two Sisters (On the Terrace) which hangs in the French Impressionism gallery.  Renoir named the painting Two Sisters, the first owner of the painting titled it On the Terrace.

Like Renoir's famous Luncheon of the Boating Party, the setting for Two Sisters was at a restaurant with outdoor seating.  In 1925, it was sold to a woman from Chicago for $100,000.  She requested the Renoir be donated to the Art Institute after her death where it has hung since 1932.

You may remember Donald Trump had a reproduction hung in his jet, before he ran for President.  The New York Times reporter Timothy O'Brien interviewing Trump was told it was the real thing.  O'Brien replied "Donald, it's not.  I grew up in Chicago, that Renoir is called Two Sisters (on the Terrace) and it's hanging on a wall at the Art Institute of Chicago. That's not an original."