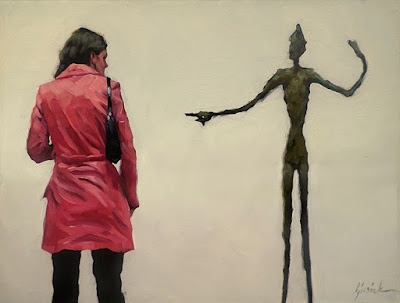 The woman here is seemingly taking a cue from Pointing Man by Alberto Giacometti in the Museum of Modern Art.  My mom, who was a painter, printmaker and occasional sculptor,  L-O-V-E-D Giacometti.  I was introduced to this artist at a very young age, by my mom, who taped up dozens of his works on the wall of her studio.

Giacometti was born in Switzerland in 1901, took on formal training in the arts during the era of Cubism and the craze of tribal art - much like Pablo Picasso.  He dabbled in Surrealism for a while, broke off from that to the emergence of Existentialism.  He created small, thin figurative sculptures which took off because of the overall dismal, suffering atmosphere from World War II, and he became quite the popular artist of that time.

His works evolved all through the 50's and 60's, during which time he painted numerous portraits, which my mom was crazy over.  I am too.