"For Your Viewing Pleasure" 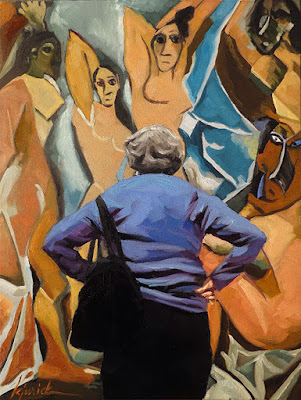 Pardon my absence - I've been working on several paintings for a Small Works Auction taking place in July.  I've got one more to go and I'll post all of them.

This new painting is of a woman viewing Pablo Picasso's Les Demoiselles d'Avignon which hangs in the Museum of Modern Art in New York City.  It's HUGE - 96" x 92", which effectively feels like the women in the painting are life-size and on display for all eyes to see.

The painting portrays five prostitutes from a brother in Barcelona - it has a distinctive primitive style and is really the beginning of cubism and Modern Art.  First exhibited in 1916, it was quickly deemed as immoral.  Years later, exhibited in a gallery in New York City, MOMA bought the painting for a mere $24,000.
Crazy cheap.