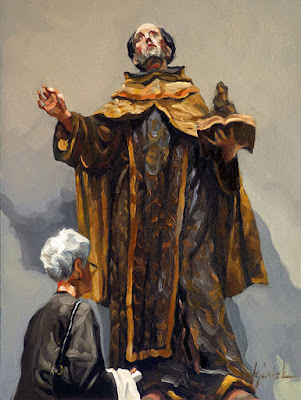 The National Gallery of Art in Washington DC is home to this beautiful, wooden sculpture 'Saint John of the Cross (San Juan de la Cruz)' - commissioned in 1675 by a convent near Seville, Spain to a 21-year-old artist named Francisco Antonio Gijon.  The contract survived all these years, stating the work was to be made of cypress supplied by the monks and be finished in less than two months time.
Yikes.

Saint John of the Cross was a 16th century Spanish mystic, imprisoned for pushing reform of his Carmelite order - his imprisonment inspired some of the most admired poetry and spiritual verses ever written in Spanish.  The mystic figure holds a quill on one hand and a book with a model of a mountain surmounted by a cross in the other - referring to his 'The Ascent of Mount Carmel'.

This 6-1/2' sculpture will bring you to your knees.

Wow! This is beautiful Karin!