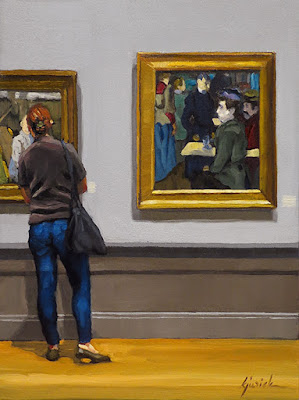 Most people know Toulouse-Lautrec for his short stature and his paintings of the Moulin Rouge.  I'll tell you a bit more about this genius, who was also a printmaker and illustrator born in France in 1864.

He was the son in an aristocratic family, his parents were first cousins who, early on, split up and Henri was raised by a nanny until the age of 8 when he went to live with his mother.  He was a budding artist early on.  At 13, he broke his right femur and a year later fractured his left, which never healed properly.  He suffered from several genetic disorders, attributed to a family history of inbreeding.  As an adult, he stood at 4 ft, 8 in tall which most likely was why he immersed himself in art.

Toulouse-Lautrec had a tragic life, contracted syphilis, abused alcohol to deal with his pain, had a nervous breakdown at the age of 34 and died at the age of 36.  He left behind more than 700 paintings, 350+ prints and posters and over 5,000 drawings.  The quintessential suffering artist I'd say.

What stands out to me is he painted real people in real places doing real things.  Not glamoured up but people as they were, warts and all.  Honest and sympathetic.

From the National Gallery of Art in DC, a woman in Henri De Toulouse-Lautrec's painting 'A Corner In a Dance Hall' seemingly looks on at a visitor studying another piece.

He's one of my favorite characters in art history. Love this piece!

Have you read Sacre Blue? it's satirical/historical fiction and he's a prominent character, as are many other impressionist artists. You might enjoy it!!