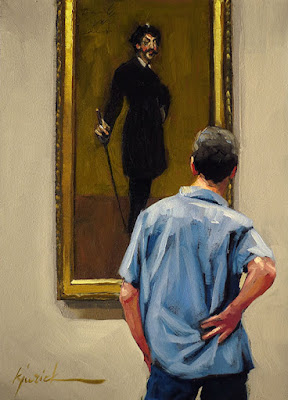 Here's one of my favorite paintings in the Metropolitan Museum of Art in New York City - a large portrait of the artist 'James McNeill Whistler' by the friend and fellow artist William Merritt Chase.  I've read when the two painters met, they became instant friends and both agreed to paint a portrait of each other.  They probably were trying to hone their portrait skills to compete with fellow painter John Singer Sargent who was all the rage at the time.

Chase presented Whistler with this finished painting, even inscribing in the upper left corner the words 'To my friend Whistler, Wm. M. Chase, London 1885'.  Chase painted this portrait honoring Whistler's low-key palette and painterly style - only Whistler was apparently offended, exclaiming it a 'monstrous lampoon' which started a rift between the two men for a long time.  It is believed Whistler destroyed his painting of Chase, never to be seen.

Karin, I always enjoy your paintings, their titles, and your interesting stories that go with them. I'm sure it is a bit time consuming to put these posts together, so thank you so much for taking the time and sharing.