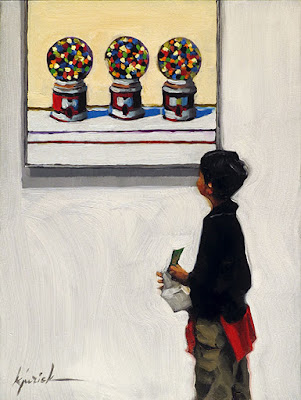 I don't remember exactly the first time I saw a Wayne Thiebaud painting - I'm guessing years ago I framed a print and it was love at first sight.  It was probably one of his fabulous dessert paintings - wedges of pie or decorated cakes.   It stirred up my creative juices, it made me want to paint again.   It made me want to paint with oils.

Thiebaud's distinct style is paint laid on thick, as if he's really icing a cake with his paint brush.  You can almost see in your mind his process of outlining and swirling the brushstrokes.  I love that.  Besides his recognized plates of foods, pies, cakes, candies, ice cream cones, shoes, lipsticks and figures,  he has painted the most stunning bird's-eye-views of California landscapes, laying on the paint and colors in patterns that just perfectly harmonize.  He has painted cityscapes that defy perspective rules,  stretching San Francisco-like streets and shadows to an almost vertigo-causing image.  Just genius. 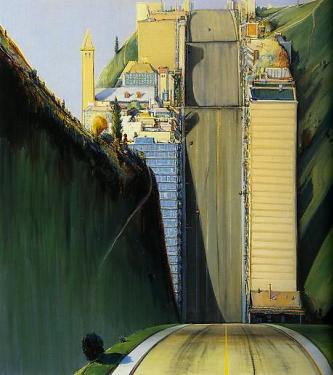 Wayne Thiebaud was born in Arizona in 1920, grew up in Long Beach, California - as a teenager, worked at Walt Disney Studios - essentially becoming a commercial artist until he was influenced to go the fine art route, like many artists I know.  In the 60's, an art dealer in New York grabbed on to him - during the Pop Art movement of Warhol, Lichtenstein, etc.  I read somewhere he didn't define himself as a Pop artist - he referred to himself as a 'traditional painter of illusionistic form'.  Thiebaud is nearly 95 years old and I think still paints.

If I could personally meet any living artist,  it would be Thiebaud.  I regard him as one of the most influential, brilliant painters of our time.  My great admiration for Wayne Thiebaud was an easy choice for the letter T in my series ArtistZ.

As for my painting, the young man is viewing 'Three Machines', which hangs in the de Young Museum in San Francisco.  I tried to paint in the same swirly, free, ebullient style as Mr. Thiebaud.

Love this one, Karin. Thiebaud is one of my favorites also.
Wonderful!

I was so fortunate to have Thibaud for my teacher at UCD. He's a great artist and an even greater teacher and what a gentleman! So bright and articulate. Love him!