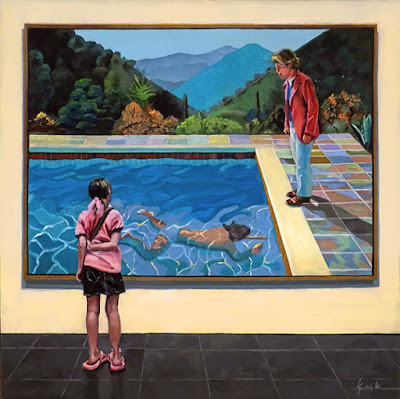 12 x 12"
oil on panel
What says summer like a swimming pool and being this is the unofficial start of summer I'm posting one of my new paintings for a group show Looking Forward, held at Robert Lange Studios and opening July 2nd.
Portrait of an Artist (Pool with Two Figures) 1972,  is one of many paintings David Hockney used a swimming pool as his main subject.  While flying into Los Angeles from England, his birthplace, he marveled at what he saw below.  ‘I looked down to see blue swimming pools all over, and I realised that a swimming pool in England would have been a luxury, whereas here they are not.’  Without realizing it, he found one of his greatest subject matters for the following two decades.
Hockney's first attempt at this composition, after months of working and reworking it, ended with a total wipe-off.  He set off to take multiple photographs until he found the exact reference he was looking for - imagined months ago.  With just four weeks until a gallery show opening, he worked 18 hours a day and completed the finished painting the night before the shipper was to pick up the piece and get it to New York City.
46 years later, Hockney's most widely-known and loved works of art sold for a record $90.3 million in Christie's auction.  In 2019, he left Los Angeles after residing in California for 55 years, and now lives in Normandy, France where he says he'll live out the rest of his days.  The 82-year-old artist describes a normal day is working in his studio in the morning, breaking for an afternoon meal and maybe a nap, then going back to his studio for the evening.
Now that's the life.
Please click here for a larger view and purchase/contact information.