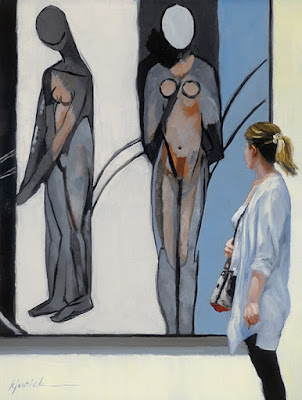 I really appreciate taking a break from painting larger pieces for a show, a show taking place four months from now, and painting these smaller ones - working out some ideas rolling around in my head.  It also helps me earn a living while I'm working on paintings no one will see until August.  So thank you for considering a bid or two on these smaller pieces.

You see the right half of a large painting by Henri Matisse, Bathers by a River.  I love this Matisse.  It hangs in the Modern Wing of the Art Institute of Chicago.  Matisse considered Bathers by a River "one of five most pivotal works of his career."  You may remember my past post regarding Dance and a Russian art collector commissioning Matisse to do three large pieces for his mansion - this was one of three presented to the man and also the one that was rejected.  The collector settled for Dance and Music.

So Matisse held onto this painting for about four years - a time when he was really getting into Cubism.  With renewed ambition, he made changes in composition, the faceless, oval heads of the figures, divided the canvas into four panels of color and loved the results.   He essentially simplified four nude figures besides a river (the blue panel) and positioned in the tall grass (the left half you don't see here) with a snake appearing as a threat - reflecting Matisse's concerns about the climate of war going on around him.

Next, I am going to paint a companion to this one - including the left half of Matisse's wondering painting.