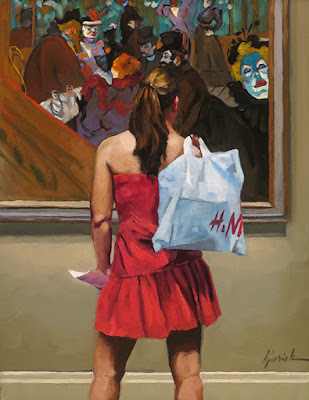 I was enamored with At the Moulin Rouge from the first time I saw it at the Art Institute of Chicago. It was that haunting face on the far right, as if she was looking at me through a window seemingly inviting me in to join the party.

Henri de Toulouse-Lautrec painted Paris' nightlife like no other.  Caricatures who he knew well, like Jane Avril in the center with the flaming-red hair or the dancer May Milton who stares at you with her painted face.  The painting is two joined canvases, said to have been severed by Lautrec's dealer after his death - hoping the separate canvases were more saleable.  The entire composition was eventually restored.