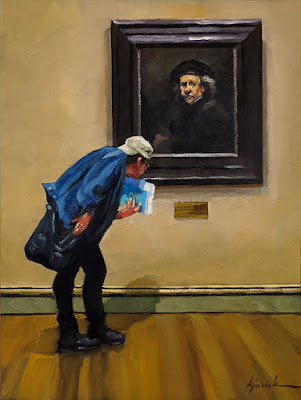 What occurs to me when I study Self-Portrait by Rembrandt van Rijn is this is not only an exquisite oil painting but it's the man himself - notably one of the most famous artists of all time.

Rembrandt is known to have drawn, painted and etched many self-portraits during his lifetime and one can gauge his personal events and moods just by the differences in appearance in these portraits.  He painted this self-portrait in 1659 after he had suffered financial failure after many, many years of success.  He lost his mega-mansion and other possessions to pay back his creditors.  He was in a state of defeat, one can imagine.  Yet there is a sense of dignity in his older face and a deliberate portrayal of a learned painter.