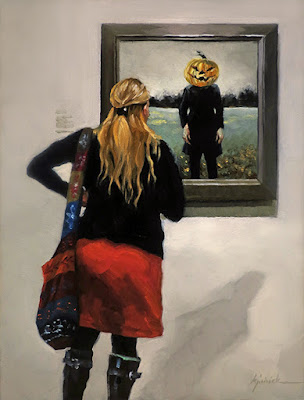 6 x 8"
oil on panel
sold
When October comes around, I always think of the Wyeth family - as in N. C., his son Andrew and his son Jamie.  The enthusiasm for pumpkins and Halloween started with N. C., with costumes and Jack-O'Lanterns playing a large part of the celebrations.  All three of the artists painted many versions of pumpkins placed around the home, in vines, lit at night and then there's Pumpkinhead, painted by Jamie Wyeth, a self-portrait done in 1972.
The best way to explain how this painting came to be is by Jamie himself:
“I had been elected to the National Academy of Design in New York, and one of the requirements was that you give a portrait, a self-portrait of yourself. Well, I didn’t want to do myself in a self-portrait, but I love pumpkins. It’s the sinisterness, the Halloween I’ve always loved. It’s a little bit edgy. So I did it and of course they were furious and rejected it.”
Imagine Jamie Wyeth's submission to a panel of stuffy art professors.  That's funny in and of itself.  It speaks to him messaging the art world's long standing rejection of the Wyeths being 'real artists' and more illustrators and saying 'take that'.
Pumpkinhead has been and always will be one of my very favorite paintings by the great Jamie Wyeth.