"A Cornucopia of Color" 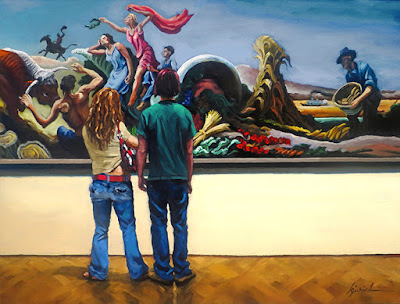 If I start by saying the artist, Thomas Hart Benton, has long been a personal favorite of mine, you think 'yah, yah, sure, sure. Who isn't a favorite artist of hers?'  But when I was 15 years old, I painted a long mural in the theme of American history, in a high school I attended in Warminster, Pennsylvania and based the entire painting in the style of Thomas Hart Benton.  The mural was, to the best of my memory, about 30 feet wide.  Benton's painting Achelous and Hercules featured in my new piece is over 22 feet wide by 5 feet high.  It's magnificent.

Taken from the Smithsonian Museum of American Art's description says it best "Intense colors and writhing forms evoke the contest of muscle and will between Hercules and Achelous, the Greek god who ruled over the rivers. In flood season, Achelous took on the form of an angry bull, tearing new channels through the earth with his horns. Hercules defeated him by tearing off one horn, which became nature's cornucopia, or horn of plenty. Thomas Hart Benton saw the legend as a parable of his beloved Midwest. The Army Corps of Engineers had begun efforts to control the Missouri River, and Benton imagined a future when the waterway was tamed, and the earth swelled with robust harvests.
Benton's mythic scene also touched on the most compelling events of the late 1940s. America's agricultural treasure was airlifted to Europe through the Marshall Plan as part of Truman's strategy to rebuild Europe and contain communism. Benton may have been thinking of his fellow Missourian's legendary stubbornness when he described Hercules as "tough and strong" with "a reputation for doing what he thought was right." 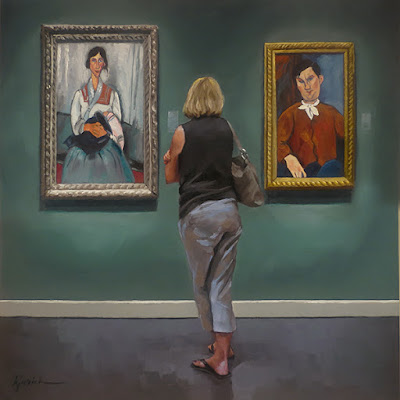 The National Gallery of Art in DC devoted a pass-through room to the Italian-Jewish artist, Amedeo Modigliani's paintings - a personal favorite of mine.  My mom, who was an artist,  l-o-v-e-d Modigliani.  She once carved a chunk of wood into a face emulating his oval, elongated shape that is one of my priceless possessions.

Modigliani was born in Italy in 1884, the son of Jewish parents who raised four children in poverty.  Amedeo was a sickly child, taught at home by his mother, exposed to literature, philosophy and art.  He was sent to study classical painting by a local master who often referred to him as 'Superman'. Throughout his young life, Amedeo dealt with severe bouts of tuberculosis, and when he recuperated he picked back up with intense studies of painting in Italy and Paris. He soon rejected the more traditional styles and persevered his own unique, bold artistic flair.

Amedeo was in his early 30's when WWI broke out.  Despite his poor health and continued drug abuse during that time, he produced much of his finest work including sculptures, which he devoted nearly five years to exclusively.  His only solo exhibition occurred in 1917, including over 30 female nudes which was well received by the gallery but not by the local police, who shut it down for 'indecency' on the day that it opened.

Modigliani's passion for art was short-lived and he died of tuberculosis meningitis at the age of 35, in Paris, France.  He is another example of a genius artist who had little success while alive but achieved great popularity after his death.


I've been working on several paintings for a client.  They are officially sold but I wanted to show them to you. 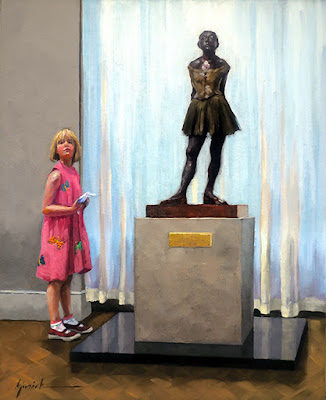 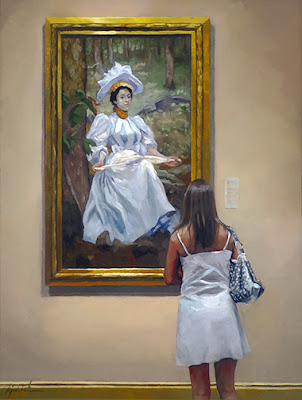 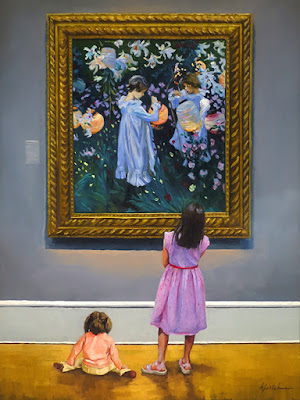 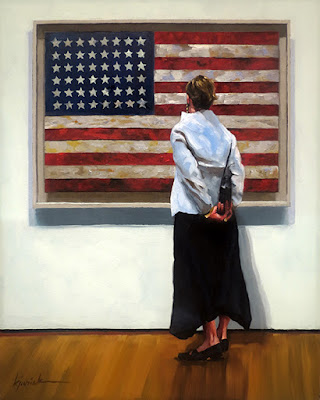 Jasper Johns was one of the most influential American painters of the 20th century who produced over 40 versions of the American flag.  Johns created the first, Flag, in 1954 at the age of 24, two years after he was discharged from the Army.

To give you some context, the US flag was often the news headline in 1954 - then President Dwight Eisenhower signed an amendment to the pledge of allegiance on Flag Day to add the words 'under God',  the McCarthy hearings took place three days after Flag Day, the year was the 175th anniversary of the birthday of Francis Scott Key,  who composed The Star Spangled Banner.  The Iowa Jima Marine Memorial was dedicated at Arlington National Cemetery.  Johns and his father were both named after Sgt. William Jasper who saved the fallen flag of the Americans in the Revolutionary War.  And in 1954, our country had 48 states - the 49th and 50th, Alaska and Hawaii, would join the United States of America in 1959.

To appreciate Johns' Flag, you must get close up.  It is made using oil paints, encaustic (wax mixed with pigment) and newsprint, which is visible under the red and white stripes.  There is no hidden meaning in the texts of the newsprint, purposely Johns selected non-political or national news.  Jasper Johns aimed to paint 'things the mind already knows', relieving him of creating new design and focusing on the execution instead.

The painting was exhibited in Johns' first solo show in 1958 where the director of the Museum of Modern Art, Alfred Barr, wanted to buy it but was worried how it may look so he persuaded a friend to buy it instead, and he donated it to the museum in honor of Barr when he retired. 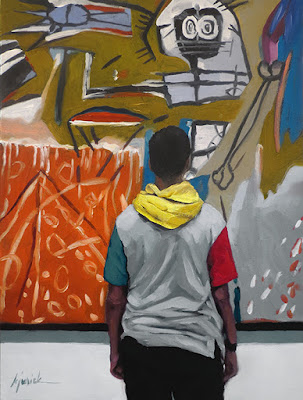 I'm home from a road trip up to Virginia to visit with family and got to visit the National Portrait Gallery in DC while we were there.  This museum, connected to the Smithsonian Museum of American Art is somewhat overlooked by visitors because it's not on the Mall with numerous other great museums, but it is SO worth it.

Credit to my sister-in-law, who took the photo for this new painting - a young man viewing an abstract expressionism painting by Jean-Michel Basquiat, which I can't find the title to.

Jean-Michel Basquiat was a young, prolific artist who created most of his work during the 80's.  Born in Brooklyn, New York in 1960, he was a talented artist at a young age, encouraged by his mother, fluent in French, Spanish and English.  His parents separated when he was eight, returned to his mother's home in Puerto Rico for a couple of years then returned to New York City.  He was 13 when his mother was committed to a mental institution and Jean-Michel's troubled teen years began.  When he dropped out of high school, his father banished him from the family's home and he stayed with friends, supporting himself by selling artwork and T-shirts.

Basquiat went from homelessness and unemployement to selling his paintings for up to $25,000 in a matter of several years.  He produced around 600 paintings, 1500 drawings and sculptures in his short life and died at the age of 27 from a heroin overdose.

To summarize Basquiat's life, his experiences, the magic of pure fate that shaped his future, would take up an entire book.  I think he was a genius way before his time, but he lived in the right time for his artistic talents to be seen and heard.  He once described his art as 80% anger and to be described from then on by critics as "80% anger and 20% mystery".

Just one more plug for if you're in Washington DC - go to the National Portrait Gallery.  The museum redid the President's portraits gallery and it's most excellent.  Especially the portrait of President Obama, by Kehinde Wiley.  It brought tears to my eyes. 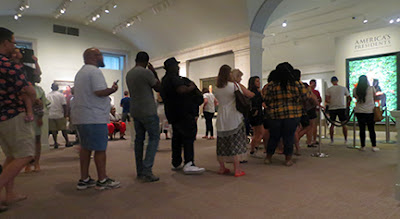 The long line to see Obama's portrait up close.

Labels: a painting a day, African-American, art museum, boy, figurative, Jean-Michel Basquiat, Karin Jurick, oil
Newer Posts Older Posts Home
Subscribe to: Posts (Atom)
“It seems to me very important to the idea of true democracy - to my country - and to the world eventually - that all men and women stand equal under the sky...” - Georgia O’Keeffe