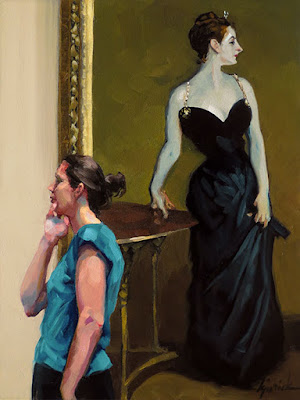 I'm not sure there is a more perfect painting other than 'Madame X' by the American artist, John Singer Sargent.  His painting debuted in 1884 in Paris - critics freaked out and deemed it scandalous and immoral - too 'erotic' for their delicate (prudish) eyes it seems.  Even the family of Virginie Gautreau (Madame X) was outraged, particularly because one of the dress straps was originally slipped off her shoulder.  Sargent appeased the family by repainting the strap and kept the painting for 3 years - meanwhile moving to London and becoming one of the most sought-after portrait painters of the times.  The Metropolitan Museum of Art in New York City purchase 'Madame X' in 1916.

I am quoting a portion of the Khan Academy's summary about 'Madame X', because I think it's so very well said -  'The painting - which debuted to severe disparagement but is today treasured as a masterpiece beloved in the history of Western art - is but one example of an artwork that gradually evolved from epitomizing the condemned to the celebrated.  Much of a work's initial reception is based upon society's tastes, standards of etiquette, and values of the era, and as these attitudes shift over the decades, the public may begin to look at older paintings with new eyes.'

There isn't a single painting that Sargent created that doesn't bring me to my knees - so it was an easy choice for the letter R in my series ArtistZ.

When Forgery Isn't a Crime 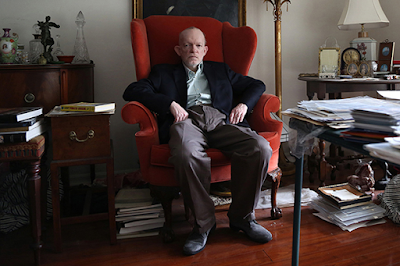 I watched a fascinating documentary last night about the art forger, Mark Landis.  It is part of the series POV on PBS - titled Art and Craft.   Artists should find this story and documentary compelling, but I think anyone would really.

'Mark Landis is one of the most prolific art forgers of the modern era — and he isn't in it for the money. In the last 30 years he's copied hundreds of pieces, from 15th-century icons to works by Picasso and even Dr. Seuss, then donated them to museums across the country. When a tenacious registrar discovers the ruse, Landis must confront his legacy and a chorus of duped professionals intent on stopping him. But Landis is a diagnosed schizophrenic, driven since his teens to escape "the life of a mental patient," and ending the con isn't so simple. A cat-and-mouse caper told with humor and compassion, Art and Craft uncovers the universal in one man's search for connection and respect.'

I just had to tell you about it.

Read about Art and Craft here, where you'll find your television schedule or the link to stream it. 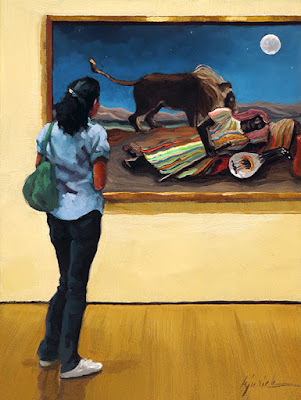 My choice for the letter R for my series ArtistZ was well thought out because there are many painters I admire - Rodin, Rembrandt, Rothko, Renoir, Rivera to name a few.   In the end, I chose the French painter Henri Rousseau and his brilliant 'The Sleeping Gypsy' as an Ode to the Full Moon, which takes place tonight.  The bonus is it is the super moon and a lunar eclipse, if you're lucky enough to witness the beauty taking place.

Rousseau was Post-Impressionism, self-taught which explains his distinctive style that is unmistakable when you see a Rousseau hanging in a museum.  He was born in France in 1844,  his family was middle-class, he worked real jobs and painted in his spare time - he taught himself to paint mostly from copying works of art in the museums of Paris and at the age of 49, not unlike many of us, retired from his job and dedicated himself to art.

Rousseau painted 'The Sleeping Gypsy' in 1897 and described his subject this way, "A wandering Negress, a mandolin player, lies with her jar beside her, overcome by fatigue in a deep sleep.  A lion chances to pass by, picks up her scent yet does not devour her.  There is a moonlight effect, very poetic."

The painting hangs in the Museum of Modern Art in New York City,  I always stop and stare for a good while - it has a peaceful, compassionate feeling about it that moves me. 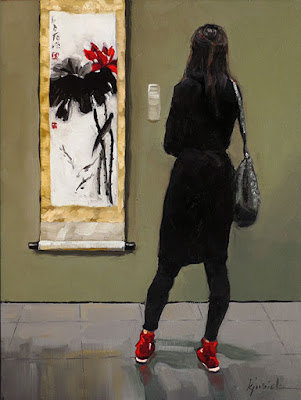 A new addition to my series ArtistZ - and I will say, the hunt for an artist for the letter Q wasn't easy.  I narrowed it down to three painters and chose the one that spoke to me - Qi Baishi.

Qi Baishi, a Chinese artist, born in 1863, is one of the most famous contemporary Chinese painters who could paint nearly every subject matter and is best known for his flowers, birds, insects and fish.  It is said 'he mastered the ability of suggesting the essence of his subject with a few, brief strokes.'  Which is why it appeals to me - it is very Zen. 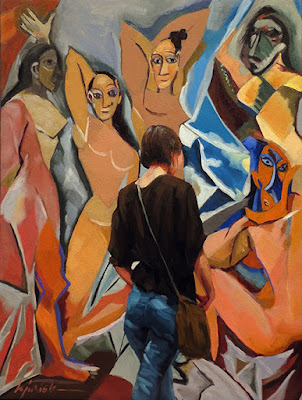 I chose Pablo Picasso for the letter P in my series ArtistZ - how could I not?

Picasso is the most-recognized, most-influential painter of the 20th century - I could devote an entire week's worth of posts talking about him, his work, his fame, his womanizing, his long life.  Rather than do that,  I'll tell you why I chose Picasso and why I chose 'Les Demoiselles d'Avignon'.

Picasso was born in Spain but spent most of his life in France.  He was a painter, printmaker, sculptor, ceramicist and stage designer.  He lived to the age of 91, spent 80 of those years devoted to creating art.  He is known for his 'blue period' and 'rose period' by many - he was co-founder of Cubism, with his fellow artist and friend Georges Braque.

Which brings me to why I chose, what some consider, the most-influential painting of the 20th century - 'Les Demoiselles d'Avignon', which hangs in the Museum of Modern Art in New York City.  Originally titled 'The Brothel of Avignon',  it depicts five nude prostitutes in sharp, geometric shapes, distorted, broken apart in places on a large 96 x 92" canvas.  It's considered the precursor of Cubism - it freaked out the art world in 1907, if you can imagine.

My mom, as I've mentioned, was a painter - she loved Picasso.  The cubism style fascinated her, his influence of African/Primitivism appealed to her and carried into her paintings and carvings.  She had tons of books on Picasso, always open, often cut up and pinned on her easel.

My favorite paintings are Guernica,

which I've never seen in person, and 'Les Demoiselles d'Avignon', which I've seen several times at MOMA - both are immense, powerful works of art.  If you are inclined to want to know more, here's a good article, written in 2007 in Newsweek, 100 years after Les Demoiselles was presented to the world. 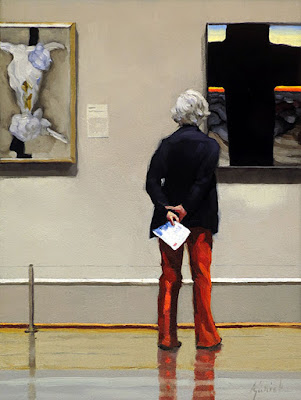 I was introduced to Georgia O'Keeffe as a teenager, my mom, who went through a period of painting abstracts, had numerous books of O'Keeffe's work.   A few years later, I saw an exhibit of Alfred Stieglitz, which included many photographs of Georgia O'Keeffe and I was more intrigued.

She was born in Wisconsin in 1887, studied at the Art Institute of Chicago mostly - Stieglitz fell in love with her work, and in 1916, held a show at his New York City gallery without her approval.  She attended the opening, walked up to Stieglitz and said 'Do you know who I am?' which he replied 'no' which she replied 'I'm Georgia O'Keeffe and you are to take all my artwork down now'.  But, he smoothed talked her into 'showing the world her beautiful art' and she married Stieglitz 8 years later.

In the Art Institute of Chicago, one of my favorite paintings of hers is 'The Shelton with Sunspots, NY' which hangs in a different spot than the two you see above - many people don't know this painting was done by O'Keeffe. 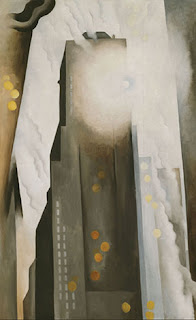 Given the chance, I could go on and on about this amazing woman and painter.   I easily chose O'Keeffe for the letter O in my series ArtistZ - featuring my two personal favorite paintings 'Cow's Skull with Calico Roses' and 'Black Cross, New Mexico'.

I wanted to include my favorite photograph of her, during her later years living in New Mexico. 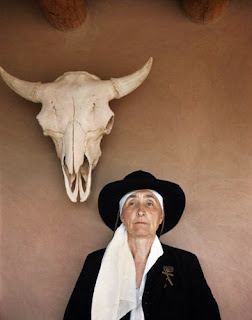 And last - you see my painting has sold.   A very valued collector of my work has offered to buy the remaining paintings in my series, an offer I couldn't refuse.  So they won't be auctioned,  but I hope you understand, and I thank all of you who have participated in the auctions (there are 2 still on auction) and purchased those paintings. 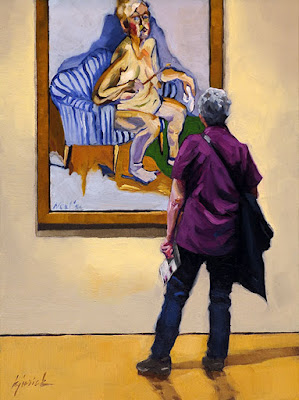 I discovered the artist, Alice Neel, when I read her obituary in 1984 - then proceeded to find any books I could on her life and her paintings.   She was born in 1900 and is known for her many portraits of friends, family, poets, artists, celebrities and even strangers.

Alice Neel started painting in her 20's and didn't receive the recognition she deserved until her late 60's and early 70's.  She had a fascinating life that's worth reading about - she had lovers and husbands and children mixed with tragedy, nervous breakdowns, travels all over the globe - she connected with people, loved and lost, had numerous, life-long friends - a full life.

Her self-portrait was a five-year process, completed on her 80th year - painted in a truthful manner.  She was in an art world when Abstract Expressionism was hip, yet she carried on with these bold, expressive, sincere portraits that spoke to people.  Including me.

I admire her for living her life as she wanted and painted what she desired.  My favorite quote of hers - "You should keep on painting no matter how difficult it is, because this is all part of experience, and the more experience you have, the better it is... unless it kills you, and then you know you have gone too far."

Alice Neel is a new addition to my series ArtistZ, truly a personal favorite. 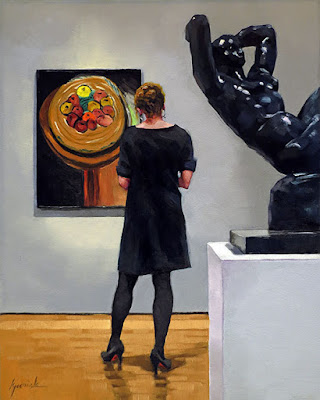 A new painting - all around elegance of a woman standing before Henri Matisse's 'Apples' and his bronze sculpture 'Seated Nude' beside her.  From the Art Institute of Chicago. 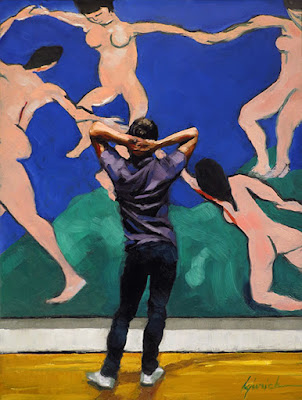 For the letter M, in my series ArtistZ,  I had so many choices it frazzled me.  Top of my list is Magritte, Modigliani, Matisse,  Michelangelo - then there's Miro, Monet, Manet, Millet, Motherwell and on and on.  I could do a whole series of M's.

I chose Henri Matisse for this reason - his 1909 version of Dance, which hangs in the Museum of Modern Art, New York.   It is one of the paintings that is widely recognized, it is one that really moves people.  They stop, they sit on the bench in front of it for a good while - I think they feel the movement, the joy.   This 1909 version was a study for a commission, his 1910 Dance II is a bit more defined and richer in skin tones but with the same composition.