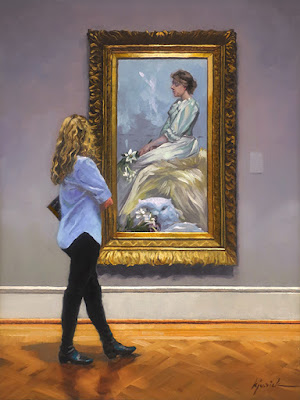 The High Museum has this stunning portrait, Miss Bessie (Miss Elizabeth Newton) by a seldom-recognized painter, Albert Herter.  It has the trademarks of John Singer Sargent - the flush ear and fingertips - and James Whistler - the arrangement of tones and tints of whites, both artists and acquaintances of Albert.

Albert Herter took off running as an artist at the young age of 19, winning awards in Expositions in Atlanta, Nashville and Buffalo then at the Paris Salon in 1890 - most of his work being portraiture.  He created cover illustrations for Ladies' Home Journal and a number of books including posters of the Red Cross and YMCA in the early 1900's.  He painted murals in private homes, the St. Francis Hotel in San Francisco, the Supreme Court Building in Hartford, the State Capital of Wisconsin and the National Academy of Sciences in Washington DC.  He was sought after and hugely successful.

Albert married Adele, a fellow artist he met in Paris, had three children, moved back to New York, where he eventually founded a tapestry and textile firm.  Two of Albert's children went on to be artists, one served as governor of Massachusetts and later as U.S. Secretary of State under Eisenhower.  His wife was a founding member of New York City's Cosmopolitan Club and was known as one of the northeast's 'society' portrait painters. 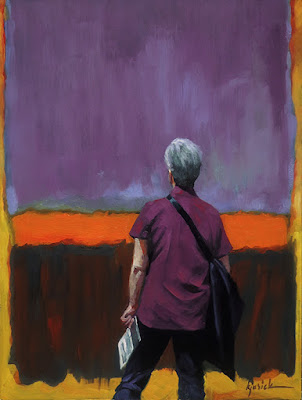 The very wise art historian Sister Wendy once explained Mark Rothko's work as the natural world around us.  This painting, Untitled, 1952, reminds me of autumn tones - Indian summer skies, leaves of browns/reds/golds.

Painting Rothko's colors is my way of practicing the mixing of paints, perhaps discovering tones I may have neglected in my own work.  Kinda like adding different spices or herbs to a recipe.  It's good exercise. 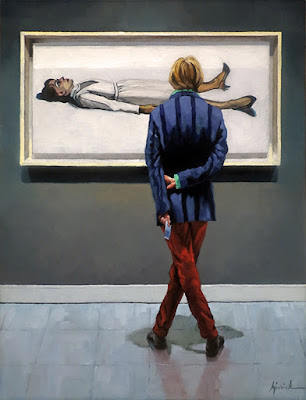 When I saw this painting Supine Woman by Wayne Thiebaud, in person, in the Crystal Bridges Museum of American Art,  I read more about it as soon as I got home.  There had to be more to this and I was right.

The definition of  'supine' can mean "lying on one's back" or "mentally or morally lethargic" so I suspected Mr. Thiebaud meant the first.  His model was his daughter Twinka  (don't you love her name?) and it was 1963.  Consider the time, women were oppressed in society and the workplace so the 'lying down' posture with open legs and a white dress, brown shoes and a clinched fist does make a profound statement.

Wayne Thiebaud will be 100 years old this November and he still creates amazing work.  There are few artists who have had such a profound impact on my life as an artist - the way I see, the way I handle paint and the exploration of many subjects.  Consider him a National treasure as I do.