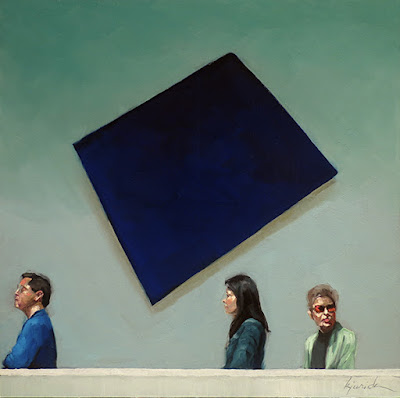 From the Art Institute of Chicago, museum patrons waiting in line to an exhibit underneath one of Ellsworth Kelly's The Chicago Panels.

The Chicago Panels were commissioned specifically for the walls on the floor above the American Art sculpture court - consisting of six painted, monochromatic, curved aluminum panels. 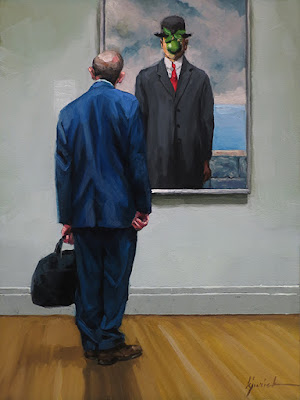 The Belgium artist, Rene Magritte clearly had a sense of humor.

Magritte's earliest paintings date back to 1915 - and like most artists of that time period, he dabbled in different styles, beginning with Impressionism, Cubism, Fauvism then Surrealism after becoming involved with a group of surrealists in Paris.  Meanwhile, to earn a living, he ran an advertising agency back in Brussels, continued painting in a more painterly style - even earned a living at one time producing fake Picassos and Braques and believe it or not, forged banknotes during the postwar period.

The Son of Man was completed in 1964 as a self-portrait.  The hovering, green apple obsures most of his face, as Magritte explained 'Everything we see hides another thing, we always want to see what is hidden by what we see.  There is an interest in that which is hidden and which the visible does not show us.  This interest can take the form of a quite intense feeling, a sort of conflict, one might say, between the visible that is hidden and the visible that is present'.

The Son of Man has been parodied multiple times in literature, film and artworks - notably a few - Norman Rockwell painted a homage titled Mr. Apple, the Simpsons had Bart behind a floating apple, and the film The Thomas Crown Affair included the painting in several scenes. 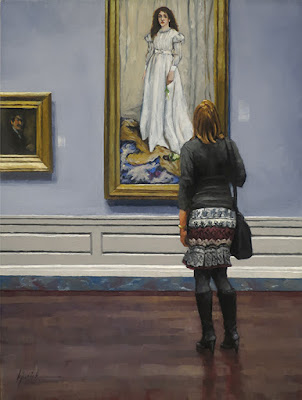 I've talked a little bit about the artist James McNeill Whistler on this blog.  Of course his most famous painting is Whistler's Mother.

Whistler entered The White Girl in the Paris Salon in 1863 where it was rejected by the 'tradition-bound' jury.  Napoleon III held his own Salon des Refuses, an exhibition of artworks that had be rejected elsewhere.  It was hugely controversial - an exhibition for the avant-garde artists - how dare he.  The White Girl was met with severe public ridicule but his fellow artists and some critics loved it.  One art critic referred to it as a 'symphony in white' and Whistler loved that reference to music so much so he retitled a number of previous paintings - including The White Girl, renamed Symphony in White, No. 1.  Whistler went on to complete two more painting of women in white dresses titled Symphony in White, No. 2 and 3.

James Whistler continued with a more limited palette, like The White Girl and Self-Portrait (there on the left) and Arrangement in Grey and Black, No. 1, also known as Whistler's Mother.

From the National Gallery of Art in Washington DC, a woman viewing Whistler's Symphony in White, No. 1: The White Girl.

The Dark Side of the Moon 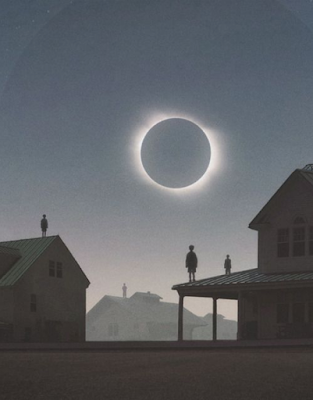 Enjoy it.  Wherever you are.

Reposting an Important One 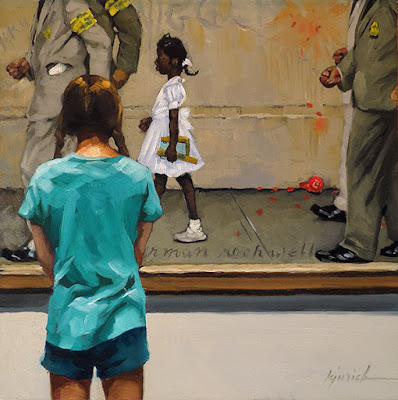 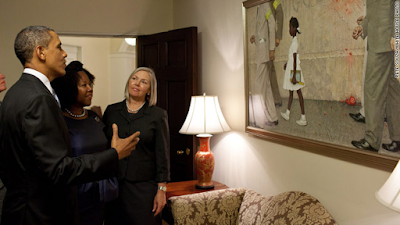 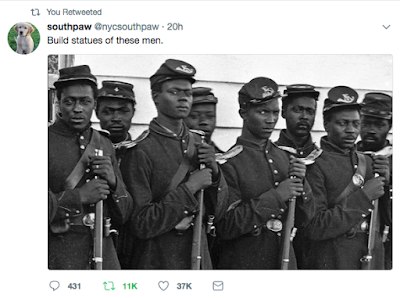 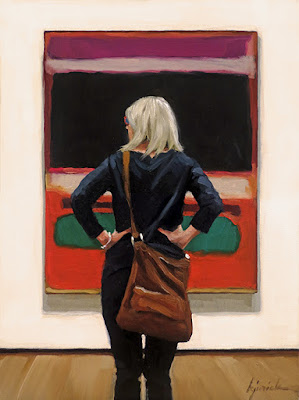 A woman stands in front of Mark Rothko's No. 3/No. 13 in the Museum of Modern Art, New York City. 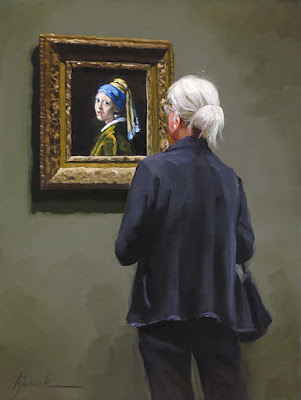 I was simply inspired to paint this new piece after I turned on the movie Girl with a Pearl Earring - which, by the way, is an artist's dream of a beautifully visual film.  Every minute is a painting.

Johannes Vermeer was a moderately successful Dutch painter in the 17th century - specializing in domestic scenes in his own middle-class life.   He painted slow and infrequently and insisted on using expensive paints but his signature element was light.

Vermeer wasn't a wealthy man - but his future mother-in-law was wealthy and insisted Johannes convert to Catholicism before marrying her daughter Catharina - and with her help, Vermeer was able to pursue painting.   The couple went on to have eleven children, all who were left penniless and in debt after his death at age 43.

Vermeer's works were hardly known outside of Amsterdam until the 19th century - imagine that.  His famous painting Girl with a Pearl Earring hangs in The Hague in the Netherlands. 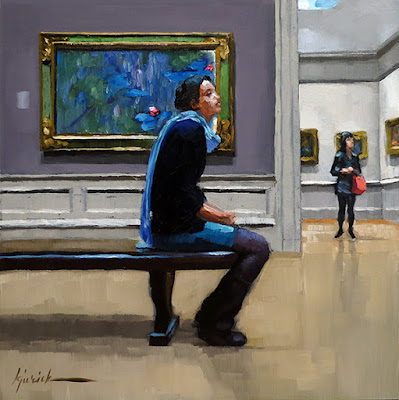 I spent a WEEK on a painting - yikes - then took a few days off and today I really, really enjoyed painting loose for a change.  I concentrated less on the art and more on the space.

A woman resting on a bench in the French Impressionists gallery in the Metropolitan Museum of Art in New York City.

Labels: a painting a day, art museum, Claude Monet, figurative, French Impressionism, Karin Jurick, Metropolitan Museum of Art, New York City, oil, women
Newer Posts Older Posts Home
Subscribe to: Posts (Atom)
“It seems to me very important to the idea of true democracy - to my country - and to the world eventually - that all men and women stand equal under the sky...” - Georgia O’Keeffe