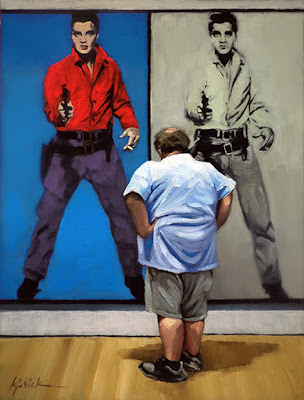 I've written about Andy Warhol, the famous Pop artist, and his fascination with idols like Marilyn Monroe, Jackie O, Mao Zedong and yes, Elvis Presley.  With movie stars, he was enamored with the oversize posters promoting the films, selling these celebrities like Campbell Soup labels sold soup. Warhol produced multiple silkscreens of Elvis, in many different ways - this one being two color silkscreens next to two grey-scale screens titled Elvis I & II.

Speaking of the King of Rock n' Roll, the image Warhol used was from the western Flaming Star that came out in December 1960.  His first "serious actor" role was void of any musical numbers.  A month, a month before, G.I. Blues came out and diehard Elvis fans LOVED it.  Plenty of music in that film satisfied audiences but the comparison was inevitable when Flaming Star premiered - proving his fans didn't share his dream of becoming a serious actor.  Another western was in the works, but the Colonel made sure he wouldn't attempt that again.