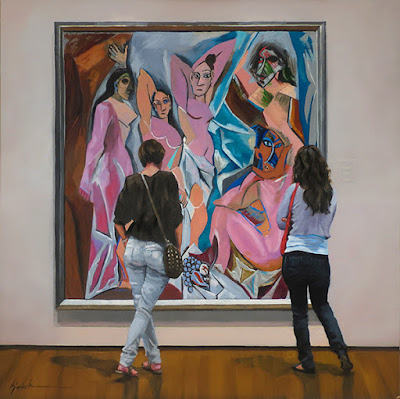 Another painting for my upcoming solo show The Ladies - featuring the very famous Les Demoiselles d'Avignon by Pablo Picasso.

The painting's original title was Le Bordel d'Avignon or The Brothel of Avignon, depicting five nude prostitutes from a brothel on Avignon Street in Barcelona, Spain, a city where Picasso spent part of his time. The title was changed during an exhibition in 1916, when an art critic referred to its present title in order to hide the shocking subject matter from the public - despite objections from the artist.

Picasso completed the painting ten years prior to the exhibition, inviting fellow artists over to his studio to view it.  There were mixed reactions, notably Matisse hated it, saying it mocked the modern art movement.  Important to mention that a rivalry between Picasso and Matisse had been building for quite some time, so maybe a tinge of jealousy was involved.

Why Les Demoiselles d'Avignon is so significant in 20th Century art is that Picasso painted it on the heels of his African Period and on the cusp of Cubism.  You can see the influence of African masks and abstraction in shapes.  The painting was eventually sold eight years after the exhibition to a private collector who promised Picasso he would donate it to the Louvre when he died - although his will said otherwise.  The Museum of Modern Art in New York City bought the painting in 1937 from the collector's estate for - wait for it - $24,000.